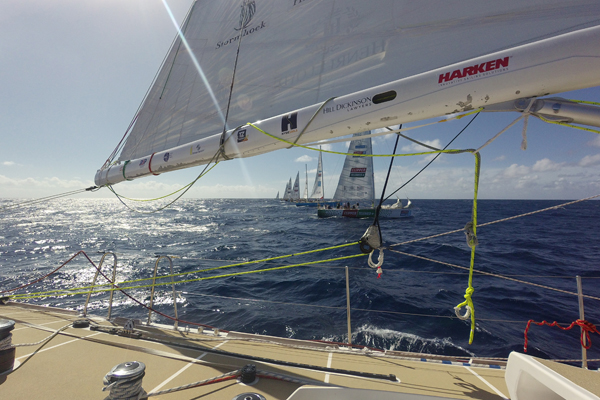 Following last night’s Le Mans start, the fleet is very close in terms of distance to go but has already spread out quite a way from north to south. Mission Performance leads the Race 12: The LegenDerry Finale by 0.15 nautical miles and is making 11.8 knots, with Unicef second, and Derry~Londonderry~Doire currently third.

PSP Logistics Skipper Max Stunell is currently in fifth place but less than one nautical mile behind the leader. Max reports: “Having drawn the leeward end of the Le Mans start again we were one of the first to have our sails up and trimmed allowing us to get our nose in front of IchorCoal and into some clean air.

“The guys have done well to maintain position and in the past 15 minutes we have just gone up with the medium weight kite as the wind has veered slightly meaning we can hold our course below the TSS (Traffic Separation Scheme). The pack is still tight with all boats visible on the AIS and no doubt the next few days everyone will be pushing for any advantage they can make.”

Skippers are well aware that any mistakes or lack of focus will result in position changes in such a tightly formed group. With over 1,000 nautical miles to go in a straight, east direction to the Scoring Gate, this is effectively a drag race section, depending how the weather forecast holds up.

This eastern route is chosen as it will take the teams well south of the icebergs that are expected in this area.

Along with the weather, the Clipper Race Office constantly monitors the ice flow which moves south with the Labrador Current down the east coast of Newfoundland. In order for the fleet to avoid the ice the teams must keep below 40 degrees north. Various 'ice marks' are in place. No yacht shall enter the ice box marked by the ice marks. Disqualification will apply for this infringement.

In his first blog, lead Skipper Mission Performance Skipper Greg Miller says: “At 19:44 hours local we hoisted our sails in haste and began this transatlantic crossing following the famous route that the Titanic took (in reverse) on her fateful journey to America all those years ago.

“The Race Office is taking no chances and has put in an 'ice box' in order to keep us away from the main flow of the ice from the north. We will still have to keep a keen eye on the horizon to make sure we don't sail into any ‘bergy’ bits that have decided to stray from the main path and drift into our path.”

IchorCoal is one of the most northerly positioned teams, currently in tenth place but less than 3NM from the leader. Skipper Rich Gould says: “Since the race start a few hours ago we have been holding a good course and a good speed, the breeze seems to be quite stable and we are making good progress to the east, everyone seems to be finding their sea legs and there is almost no sign of the green monster. Next stop Northern Ireland…”

Someone who knows these waters well is ClipperTelemed+ Skipper Matt Mitchell, for whom this race marks his fourteenth Atlantic Ocean crossing. He reports: “Our start today wasn't the best we've ever had I must say and it really felt like we struggled to get up to pace. We seem to be matching speeds with the boats around us for the time being though. This will be an interesting race with a distinct split in the fleet already forming.

“The weather forecast is good and we should have at least four or five days of off the breeze sailing meaning initial progress will be good. The team are really buoyed up after our recent success and are very keen to continue the trend. Let’s see what we can do!”

The Clipper Race fleet is due to arrive in Derry Londonderry, Northern Ireland between July 7 to 11.

Click here to find out more about the stopover, which will mark the third and final time the Clipper Race fleet will visit the city.