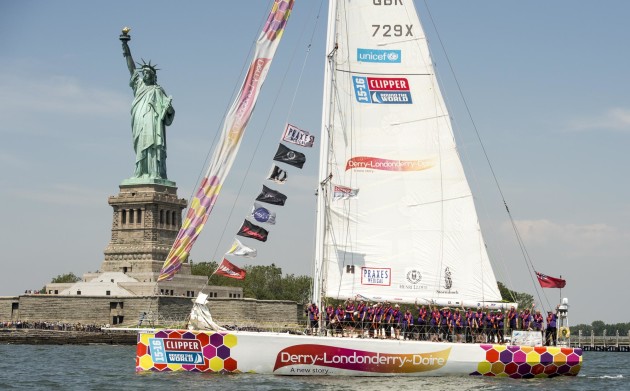 Clipper Round the World Yacht Race teams have departed New York on the final leg of the circumnavigation, the ‘Atlantic Homecoming’.

Following a Departure Ceremony and Parade of Sail in front of the New York skyline and Statue of Liberty, the 12 international teams started Race 12 of the series, the ‘LegenDerry Finale’ to Derry Londonderry, Northern Ireland.

The teams performed a Le Mans start at Ambrose Lighthouse at 1944 local time Monday (2344 UTC) on the first of three races making up the final leg. Race 13, Derry Londonderry to Den Helder, The Netherlands, and Race 14, Den Helder to London, UK will complete the global series which concludes on 30 July.

Points are extremely tight at the top of the leaderboard, with LMAX Exchange, skippered by Frenchman Olivier Cardin, 10 points ahead of second-placed Derry~Londonderry~Doire.

GREAT Britain is seven points behind the Northern Irish entry in third position, and just four points ahead of Garmin, in fourth.

With a maximum of 41 points available over the next three races, the top four positions are still up for grabs, creating a lot of pressure for the leading Skippers.

Olivier Cardin said ahead of the LegenDerry Finale start: “We will be paying close attention to the ice marks set by the Race Office in the first part of the race. Then we will be close to the North Atlantic High. It might be difficult to go to the Scoring Gate section of the course as a result.

“We want to control Derry~Londonderry~Doire and maintain our position 10 points ahead of it by staying close to the boat, GREAT Britain and Garmin by covering them. The team is not complacent at all, and we know we must keep fighting hard to stay at the top of the leaderboard, but we are confident after five overall race wins out of eleven, so far,” Olivier added.

Peter Thornton, Skipper of GREAT Britain, said the sailing would be quite challenging for the first half of the race.

“There are some good southerlies forecast, and the longer they last then the better. That will tempt quite a lot of people to be close to the ice limit gates, if the winds don’t turn out as we forecast that might cause some problems.

“The low pressure systems that are over the top of the North Atlantic High can throw up all sorts of things, even in the summer.

“We are giving it our all. We are in a situation where the top four places are available. We will keep on fighting and never give up. We had better be pretty tired when we arrive into St Katharine Docks, London, on 30 July. There is a lot of pressure and that is playing on my mind,” Peter added.

Dan Smith, Skipper of Derry~Londonderry~Doire, is also feeling the strain as his team races to its home port. “The race is incredibly tight now with all the podium positions still up for grabs. We are going to be putting everything into the LegenDerry Finale and hoping, at the very least, that we can maintain our second place in the Overall Race Standings,” Dan added.

Ash Skett, the Garmin Skipper, said the first part of the race was likely to be a drag race limited by the ice gate as the teams can’t go too far north. He then described the battle for points: “Once we round the corner of the ice gate it will get more interesting. Weather wise, we should be downwind for the majority of the race.

“We need to prioritise getting on the podium in London and are very much looking at GREAT Britain. There is a potential danger of being sucked into a battle for a lead position with the other boats, so I have told the crew we need to focus on beating GREAT Britain. Anything above that will be a bonus. We have always exceeded our own goals and built on our objectives,” added Ash.

All the teams will be gunning for a good result on the final ocean crossing of the circumnavigation, with just one point separating Qingdao, fifth, (65 points), and Mission Performance in sixth (64 points). ClipperTelemed+, in seventh, (59 points), is three points ahead of Da Nang – Viet Nam, (56 points), after podiums on the last two races for the first time. Close behind is Visit Seattle (ninth, 50 points), Unicef, tenth, 49 points), IchorCoal, eleventh, 41 points, PSP Logistics, twelfth, 34 points.