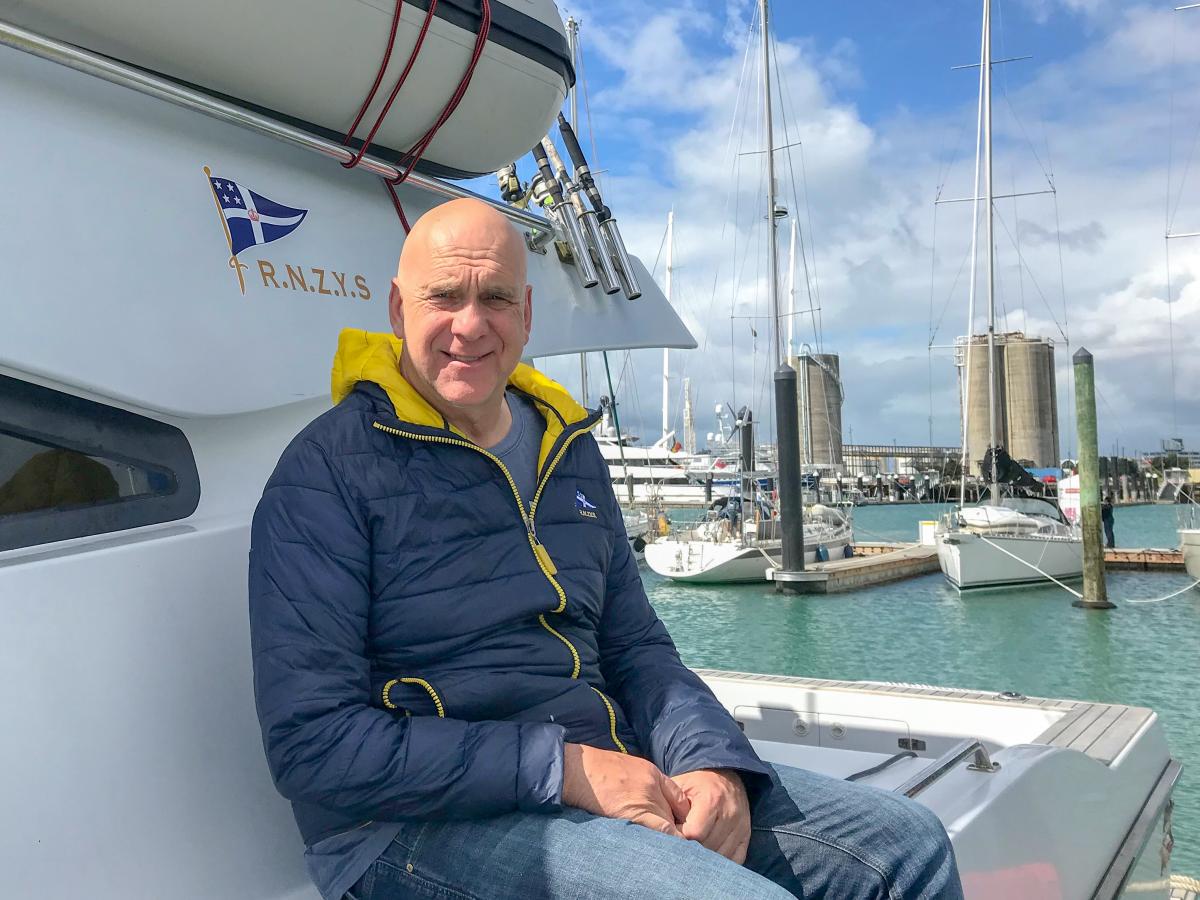 Dr Tom Mullholland on his catamaran at Westhaven.

Dr Tom Mullholland will follow a pretty simple set of guidelines during his six month circumnavigation of New Zealand – make a difference, have some fun along the way and try not to annoy anyone.

He’s bound to achieve the second but can’t guarantee the third (you can’t please everyone) however will certainly fulfil the first because he’s been making a difference for the past 30 years.

Dr Tom, as he is colloquially known, is this country’s leading wellbeing expert and on Saturday steered his 12m catamaran out the Hauraki Gulf on a six-month circumnavigation of New Zealand.

He’s on another mission, following on from previous work measuring and managing the wellbeing of those in the farming and forestry sectors.

This time he will also include the maritime industry and those involved in the sailing and boating communities in what he’s labelled his HOPP Tour – healthy oceans, people and ports. As someone who lives on his catamaran at Westhaven Marina, it seemed a natural alignment for his latest assignment to involve boats.

Dr Tom will be led by his team in his distinctive retro Chevy ambulance which will follow his circumnavigation, stopping at 16 ports to give a number of free health talks and to measure the health and wellbeing of the people they meet there. The team are aiming to measure at least 1000 people on the tour and Dr Tom already knows what he’s likely to find.

“About 30 percent will have diabetes or pre-diabetes, maybe 40 percent have high blood pressure they don’t know about and 40 percent might have anxiety, stress or depression,” he said. “But it’s also about those other things that influence wellbeing because it’s not just about blood tests or an eye test. It’s up to the individual whether they want to go and do something about it. We can only present them with the numbers and say, ‘here’s the risk’.”

It’s part of the reason why he developed an app called KYND Wellness, which helps measure someone’s physical and mental wellbeing. It can help give an immediate assessment on whether an individual needs some support.

Dr Tom found himself in that position nearly 20 years ago when suicide seemed the best option following a marriage breakup. It’s one of the things he talks about in his presentations and it resonates with his audiences.

“The important thing, no matter what you do in life, is you’ve got to be authentic,” he said. “Initially when I started telling that story 16 years ago, it was before John Kirwan and Mike King and it was hard. That’s the whole thing with mental health, people don’t talk about it. They just assume people are OK.

“What resonates with people the most is that I was at that place that a lot of people have been at and here are some tools to get your way out of it. That’s why I developed healthy thinking, because I found there weren’t very many practical tools at the time to say your thoughts created your emotions so if you want to change what you feel, change what you think. I’ve been teaching that around the world for the last 18 years.”

Dr Tom still works a few shifts at Auckland Hospital’s emergency department but feels like he’s largely patching people up. He’d rather park his ambulance at the top of the cliff than the bottom.

“I’m specialising in preventative health,” he said. “Working in an ED, I might see 10 patients in one shift. If you worked four shifts a week, you might influence 40 people. But if I can talk to 1000 people and 500 change their behaviour… it’s a lot more rewarding doing that.

“We just want to make a difference in communities, reduce suicide, improve mental health, get people to know their data so they can get their blood pressure checks. It’s nice to be able to give something back to the maritime industry. And hopefully we will pick up a few crayfish and paua along the way.”