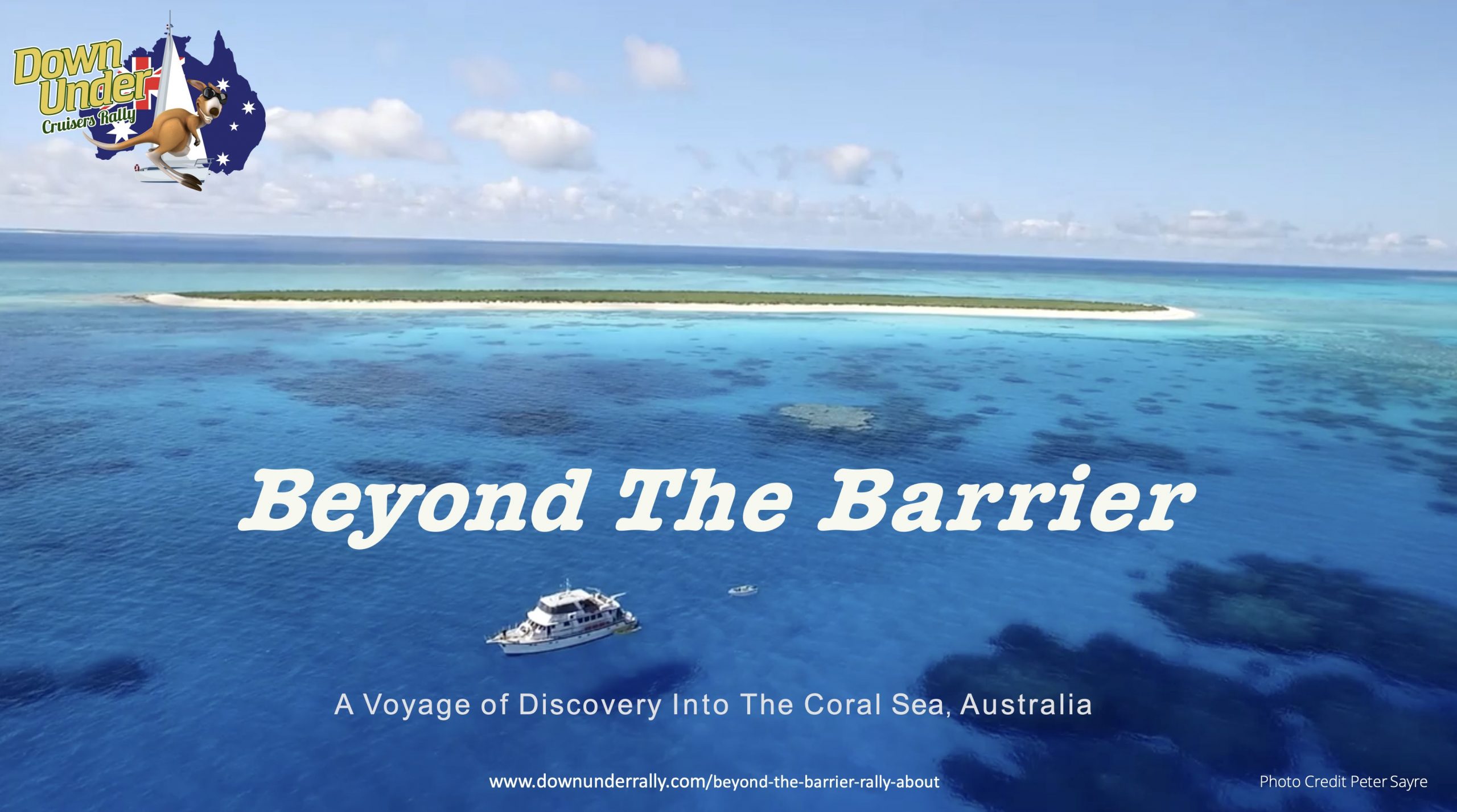 Beyond the Barrier Down Under Rally

With the arrival of 2021 and the ongoing uncertainly in regard to when Australia`s Borders might reopen for international travel the Down Under Rally announced the Go East Yacht Rally from Australia to New Caledonia and beyond would not be an option for 2021. Having been forced to cancel the 2020 Go East Rally this was an announcement the Down Under Rally was hoping not to have to make.

The response to the announcement from many in the cruising community was one of disappointment with several asking if it might be possible for The Down Under Rally to organise a rally here in Australian Waters? Some suggested a rally circumnavigating Australia would be of interest, others suggesting a rally to Tasmania or maybe up the Queensland Coast.

As a result of the interest being shown in some sort of local rally being offered The Down Under Rally put their thinking caps on.

After a lot or research and pondering it was decided the likelihood of further lock downs and or snap closures of state borders made it far too difficult to offer a rally which might be impacted by such occurrences. The conclusion was, if a rally was to be offered, the rally route and itinerary need to be within the borders of one state. The next consideration was to try and incorporate some blue water passages in the rally as well as some pretty special destinations along the way.

Having transited the Coral Sea on many occasions whilst making the voyage to and from New Caledonia the Down Under Rally organisers were aware the Coral Sea was home to a significant number of reefs systems and many of these reefs also had coral cays and or sand islands. In fact the rally organisers had spent a blissful week in the splendid remoteness of one such Coral Sea location back in 2019, ChesterfieldReef, lead to the question “how many other places like that are in the Coral Sea?”

Enter Peter Sayre of Bianca Charters a.k.a. Coral Sea Explorers. Peter had reached out to Down Under Rally organiser, John Hembrow, back in 2020 after he became aware that the 2020 Go East Rally was not going to proceed. Peter sent a copy of his book Australia`s Coral Sea Islands & Marine Park. The book itself would appeal to anyone with a love of the ocean and maritime history. Within the 162 full colour pages of the book are aerial photos of every cay and reef system in the Australian Coral Sea, GPS locations, Anchorages, Shipwrecks and history, all with full citations. This is the only book that covers every reef and island in the Australian Coral Sea.

John Hembrow of the Down Under Rally recalled having received the book from Peter so he revisited it with a new purpose in mind: “Could this be the destination we are looking for?”

Well as they say the rest is history, after several weeks of discussions with Peter and research in regard to the historical weather patterns for the past 5 years John decided that he would hold a webinar on the 30th of January and announce that the Down Under Rally was proposing a Beyond The Barrier Rally for June 2021.

It had been previously decided by John & Peter that based on the various rally destinations planned and the nature of the anchorages available at those destinations the number of vessels for the rally should be limited to a maximum of 22 participant vessels: “Hmmm I wonder if there would be that many people /vessels interested?”

With over 300 people registering for the webinar and 186 actually logging on the day it seems there is! What was even more surprising was that the entire webinar, including the Q&A session, went for just under 2 hours and almost all of the 186 people that logged in when the webinar commenced were still watching & listening right until the end!

Within a matter of hours of the of the webinar completion 22 registrations and 22 deposits had been received, the Beyond The Barrier Rally was on in June!

Actually, there was so much interest that a few weeks later the Down Under Rally announced that they would run a second Beyond The Barrier Rally in August if enough vessels were willing to register.

Within a few hours of making the announcement more than half the available places for August Beyond The Barrier Rally had been filled.

Sadly, life sometimes gets in the way of our plans and for various reasons a few of those who had intended to register, along with a couple of vessels that had actually registered for the August Rally have since had to withdraw from the rally which means there are now a few places available on the August Beyond The Barrier Rally.

So, if you, your vessel and your crew are ready for an adventure into the blue to experience the seldom visited, pristine wilderness of the Coral Sea Marine Park that is home to a labyrinth of coral reefs, sandy cays, islets, shipwrecks and an abundance of wildlife visit the following page of the Down Under Rally website to learn more about joining the August Beyond The Barrier Rally!