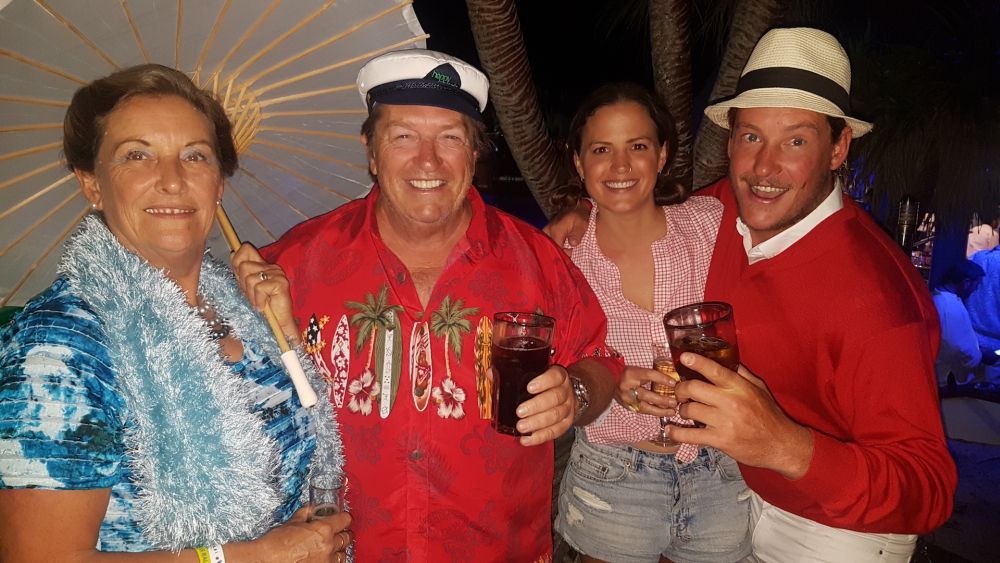 The crew of LeilaniB at the Gilligans Island party. Photo Downunder Rally.

Thirty-two of the thirty-four yachts that departed from Southport on the Gold Coast, Australia with the Down Under ‘Go East’ Rally on May 15th 2018 have arrived in New Caledonia. Two vessels returned to Southport soon after departing with autopilot failure.

The first two vessels arrived in New Caledonia on May 20th having made the voyage of around 800nm in just over 4 ½ days. The remaining 30 vessels arrived between the 21st and 23rd May.

With the assistance of Noumea Yacht Services, the Down Under Rally arranged for permission from the New Caledonia authorities for the fleet to arrive and clear in to the country at Ilot Maître instead of Noumea. This allowed the participants to experience a hassle free, relaxed and convenient arrival in New Caledonia.

Thanks to the co-operation and support of Ilot Maître resort, rally participants and their crew were able to rest and relax after the voyage in the luxurious resort grounds and take advantage of the opportunity to enjoy full use of the resort facilities.

On May 23rd a day of events, thanks to the support provided by New Caledonia Tourism (NCTPS) the Down Under Rally were able to hold the Bonjour les Marin’s (Hello Sailor) events.

The majority of the rally participants will now spend the next 10 weeks cruising and exploring New Caledonia and then sail onwards to Vanuatu with the Down Under NC2V Rally (New Caledonia to Vanuatu Rally). A further 6-8 weeks will be spent cruising the waters of Vanuatu before returning to Australia in late October / Early November.

Down Under Rally organisers John and Leanne have been praised by participants for the professional and personal manner in which they have run the 'Go East' Rally with many saying they would not have made the voyage and had the experience if it were not for the rally.

Down Under Rally director John Hembrow stated that the rally had exceeded all expectations and added that it would not have been possible with out the support of their many rally partners in particular their premium partners, Bundaberg Port Marina, The Boat Works, DBY Boat Sales, Grotty Yachty Clothing, Multihull Solutions, New Caledonia Tourism & PredictWind.

The Down Under Rally is now accepting expressions of interest in the 2019 Go East Rally. www.downunderrally.com/go-east-rally-2019/.