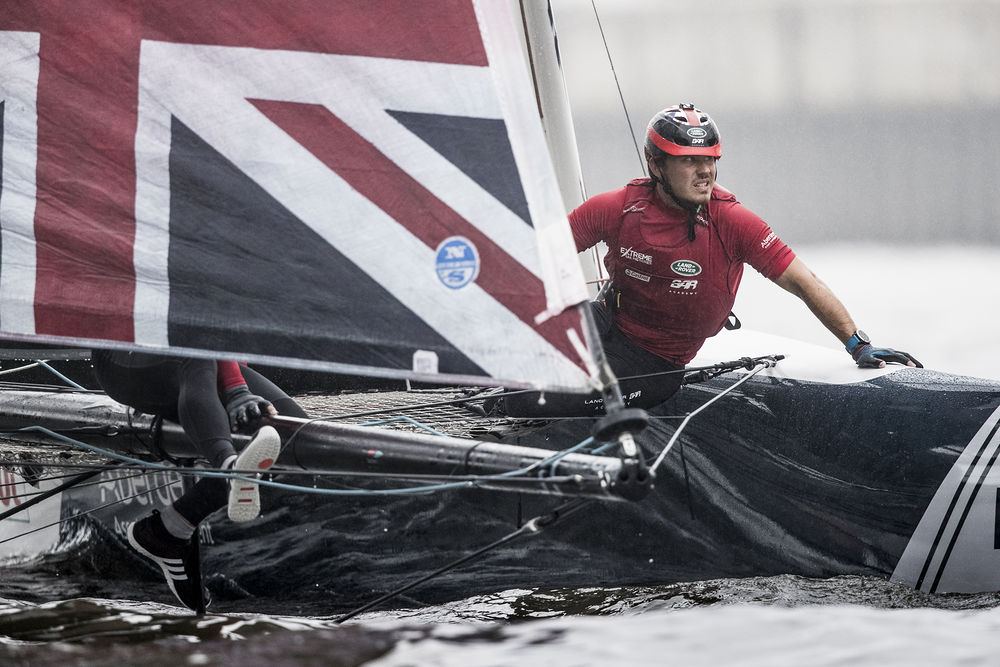 In tough conditions on the River Elbe, Oman Air out-sailed its rivals to gain a six-point lead, with the rest of the fleet separated by a narrow two-point margin, after the first day of scoring racing at the Extreme Sailing Series™ Act 5, Hamburg, presented by Land Rover.

Light and patchy winds, combined with a strong tide in Hamburg, meant just two races were completed and three abandoned and Phil Robertson's Oman Air, who won in Hamburg last season, was victorious in both.

“We managed to sneak in two wins, which is quite nice,” said Robertson, who comes to Hamburg fresh from wins in both Act 4 of the Extreme Sailing Series three weeks ago and in the World Match Racing Tour Match Cup Russia last week.

“We had a rough idea of what we wanted to do and we were able to execute it, which is quite hard with seven boats on a tight racecourse. Thankfully, everyone gave us what we wanted and away we went,” added Robertson, who took advantage of the shifty conditions to climb from the back of the pack to the front in race two.

The two younger squads, Land Rover BAR Academy and NZ Extreme Sailing Team, took a third and a fifth each to finish tied on points. The British squad occupy second place by virtue of finishing ahead of the Kiwis in the last race.

“It was hard to stay focussed because the breeze was so up and down and we had tide changing during the day and a lot of shipping,” said Land Rover BAR Academy skipper Rob Bunce.

“But I thought the lads did a good job of working out all the big game features, and it came good for us,” added Bunce.

NZ Extreme Sailing Team co-skipper Chris Steele, also found the going hard on the Elbe in the rain. “It was pretty rough on the guys; we won the start in both races and were leading at the bottom mark but it was a minefield,” he said.

“We probably lost about three boats in the last quarter of race two after we ended up stuck on the reach mark and then the finish mark. It feels like the competition hasn't really started yet. I'm sure we'll get another 15 races or so over the next two days and it'll be game on,” added Steele.

For SAP Extreme Sailing Team and Alinghi it was a day of two halves. Both managed one runner-up spot. However, the Swiss paired theirs with a last place, while the Danes went from leading the pack in the opening race, to being unable to finish after they drifted too close to the racecourse boundary and ran aground.

“We didn't start well in race two, we were at the back of the fleet. We tried to catch up but the wind died at the top mark so we got stuck,” explained Alinghi's co-skipper and helm, Arnaud Psarofaghis.

“After the abandonment on day one, we've only had two races and there's only been one bad race for us today. So there are still many races to come and we'll come back fighting tomorrow. It's terrible weather, but it's the same for everyone, so it's fine.”

The two teams, who currently sit first and second on the season leaderboard, have 17 points a-piece and finished the day in fourth and fifth.

The wildcard entry, Team Extreme, and Red Bull Sailing Team also hold matching scorecards, with a fourth and a sixth each, leaving them tied on points at the bottom of the pack. But, much stronger winds predicted for the remainder of the Act mean it is still all to play for.

Two races were completed by the Flying Phantoms yesterday evening, with Red Bull Sailing Team, sailed by Kiwis Olivia Mackay and Micah Wilkinson, taking bullets from both and finishing with a clear lead. Two races have been completed so far this evening, with two capsizes, in winds of up to 17 knots. All crew were uninjured in the capsizes.

Culture Foil and Lupe Tortilla have taken one a-piece, with Red Bull Sailing Team runner up in both, but the Austrian-flagged team remain in the lead.