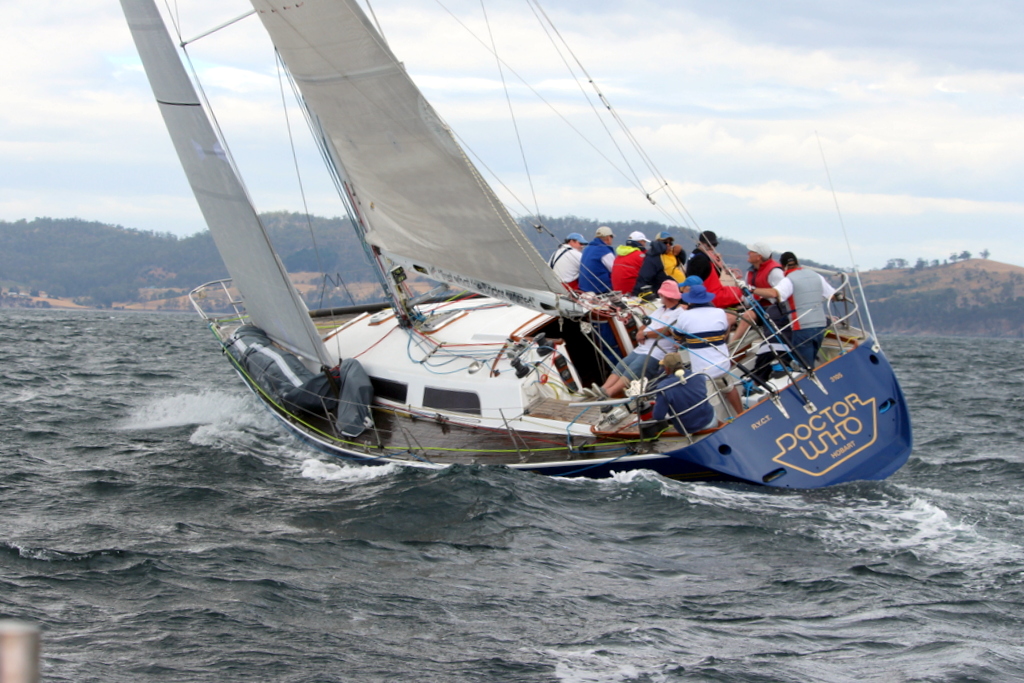 Launched back in 1975, Glen Roper’s elderly yacht, Natelle Two, today showed she still has a spring in her bow wave, winning both the PHS and the IRC categories of Division 2 in the Combined Clubs Summer Pennant race.

Designed by the US naval architect, the late Doug Petersen, to the old IOR Two Tonner rule, Natelle Two has retained the red with white stripes topsides that makes her a standout in Hobart yachting fleets.

She obviously still has a good turn of boat speed in a fresh to strong breeze, notably beating to windward.

Roper has owned Natelle Two since 1990 and has raced her consistently in harbour and long ocean races. His daughter Lucy, then aged 22, skippered the yacht in the 2011 Sydney Hobart.

With a fresh to strong westerly (it was mainly 15-20 knots but gusted to 24 knots mid-afternoon and swung to the north/north-west), Derwent Sailing Squadron set a course that took Divisions 1, 2 and 3 on a 29 nautical mile course around Betsey Island, with Division 4 to Little Betsey Island, three miles shorter.

In a race that had everything, Derwent Sailing Squadron Commodore Steve Chau summed it up as….”like a Launceston to Hobart in five hours! Reaching down the Derwent, square running to Betsey, upwind from Betsey to Iron Pot and hard on the wind from the Garrow Light to the finish off Battery Point.”

Bad luck story of the day was Doctor Who, which had been leading fleet back up the river, but fell into a light wind hole just south of the Garrow. This allowed The Fork in the Road to close in and take line honours and for Intrigue to run down the ‘Doctor’s’ time.

However, her third place still gives Doctor Who a commanding points lead in the prestigious IRC category of Division 1, well clear of Intrigue and Philosopher, which received average points for her absence racing in Melbourne.

Another veteran yacht, Don Calvert’s 1985-vintage Castro 40 Intrigue, won Division 1 under IRC and AMS. Zephyr (Ian Johnston) won under PHS scoring and also placed second to Intrigue in IRC and third in AMS for a good all-round result. Jeff Cordell’s B&G Advantage finished second in both AMS and PHS, but is not entered in IRC.

Fleet numbers were down for this first post-Christmas Summer Pennant Race, with many yachties still away on holidays, and Shaun Tiedemann’s Philosopher away for the Australian Yachting Championships and Geelong’s Festival of Sail on Port Phillip.

Chris Sheehan had originally entered his recently acquired and as yet un-named Melges 32, but withdrew late on Friday. Only 33 of the 52 boats entered for the Combined Clubs Summer Pennant actually raced today.

However, the fleet is expected to be back to full strength for race six of the Summer Pennant on Saturday, 2 February, with the Bruny Island Race and the Royal Hobart Regatta the following weekend, 9 and 11 February respectively.

Then it’s the Crown Series Bellerive Regatta over the weekend of 15-17 February which includes the inaugural Tasmanian AMS Championships and the SB20 Tasmanian State Championship.