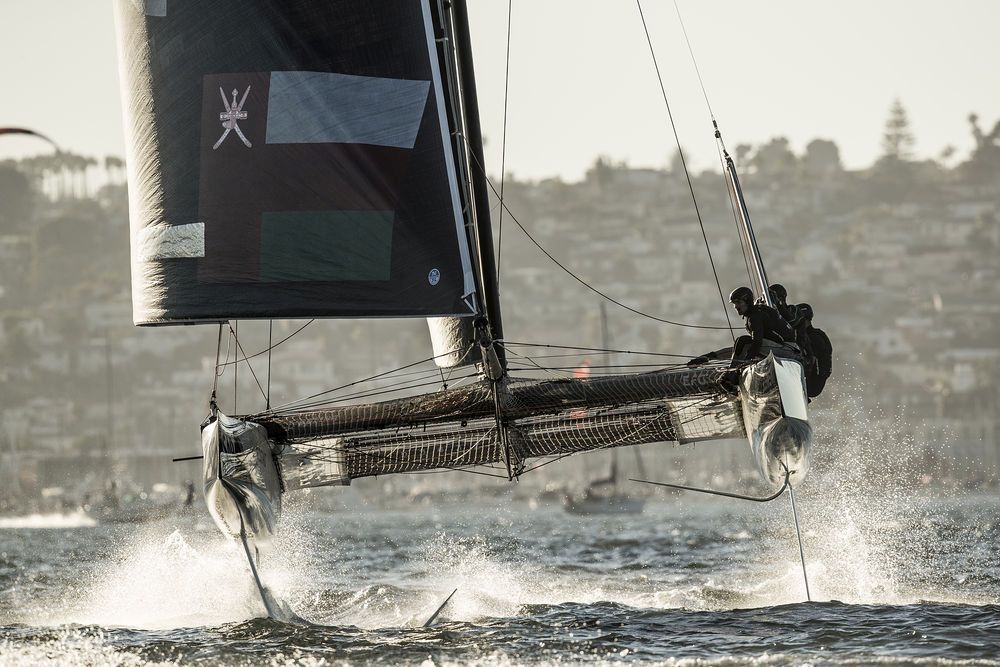 Tight, tense racing thrilled the Californian crowds that gathered on Harbor Island, as Team Oman Air topped the US Act podium on day four of Extreme Sailing Series San Diego – thwarting Alinghi in the final races of the day.

Finishing the Act with an impressively consistent score sheet, the Omani squad scuppered the Swiss team's chances of a fifth Act win this year by implementing carefully calculated match racing techniques as the competition drew to a close.

Despite their hard work to maintain the lead they had held since the start of the San Diego Act, the team onboard Alinghi were unable to defend their advantage over match racing champion Phil Robertson and his crew: Pete Greenhalgh, Nasser Al Mashari, Stewart Dodson and James Wierzbowski.

The Omani-flagged boat had been snapping at the heels of the Swiss throughout the Act, but had failed to overtake Psarofaghis and his team until the grand finale today.

A formidable battle ensued as the end of racing approached. Race 20, the fifth of the day's six races, saw the two boats line up against each other, forcing one another into unfavourable lanes. As Oman Air approached the top mark, Alinghi dialled them down on starboard, preventing them from tacking into clean air.

Eventually, Oman Air broke free, charging towards the top of the course with Alinghi right behind. Converging at the mark, the boats blocked each other once again as British INEOS Rebels swung past and down to the finish, taking advantage of the escalating tactical clash at the top of the course. Oman Air finished race 20 just behind the Brits, heading into the final double points race just three points ahead of the Swiss.

The double points decider was another tense affair. Whilst Alinghi secured the lead early on, Oman Air followed behind, keeping a keen eye on chasing SAP Extreme Sailing Team; Robertson and his crew all too aware that finishing third would lose them the Act.

After another round of match racing, this time with the Danes, the Omani-flagged boat crossed the line in second, securing them their first Act win of this year – their first win since Hamburg in August 2017.

“We are absolutely stoked,” said an elated Robertson. “This has been a long time coming. We've been working pretty hard so it's nice to reap the rewards and get a win. It's great to topple Alinghi for once!”

Although disappointed to see the end of his team's winning streak, Alinghi's co-skipper and helm Arnaud Psarofaghis congratulated the Omani team on their San Diego success.

“It was a tough day on the water, but Oman Air deserved to win,” he said. “We didn't sail that well overall in San Diego, but you don't need to win every Act to win the season. The guys onboard Alinghi did a really good job today to finish second, it will help us to beat SAP Extreme Sailing Team in Los Cabos in Mexico.”

The Swiss still lead in the overall rankings with one more Act to complete this season.

Although another chance at an Act win has passed for Danish SAP Extreme Sailing Team, they did close the day as Zhik Speed Machine trophy winners for being the fastest team on the water, an insight provided by global software giant and Series Technical Partner, SAP.

For the home team, Extreme Sailing Series San Diego, presented by SAP, proved a challenge – but a welcome one. With very little experience sailing together on a GC32, Element Spark Compass performed considerably well throughout the competition, even clocking a second place podium finish on day two.

“It's been an unbelievable event,” said the team's US skipper, Taylor Canfield. “It was great sailing on home waters and we've had some good conditions. We struggled a bit in the light winds but we also made some big gains in places. We're finishing the Act with smiles on our faces.”

It's tight at the top – expect a furious fight as the teams take each other down in the final Act of the 2018 season.