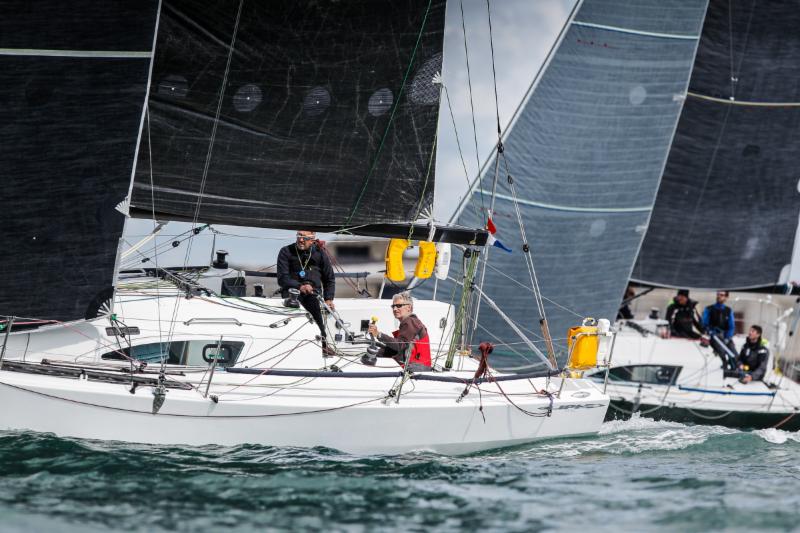 The IRC Two-Handed National Championship in September will consist of the Cherbourg Race followed by a weekend of inshore racing © Paul Wyeth/pwpictures.com

When the CYCA finally decided to enter the 21st century and allow double-handed entries in the 2020 Rolex Sydney Hobart, fans of short-handed sailing applauded.

However, that applause has turned to anger with the announcement that double-handers won't be eligible to win the over-all handicap trophy, the Tattersall Cup, owing to their use of auto-pilots.

Both the Rolex Middle Sea and Rolex Fastnet races include double-handers in the overall honours. In 2019, the JPK 10.30 Leon, sailed by designer Jean Pierre Kelbert and Alexis Loison, won the double-handed division and was sixth in IRC Overall. That year, more than 100 double-handers took part in the Fastnet Race, making up nearly a third of all entries. It is the fastest-growing sector of offshore racing, by far.

Both races also allow auto-helms on all yachts now. The Royal Ocean Racing Club, which organises the Fastnet Race, made that rule change this year, to bring it into line with the Middle Sea Race. Previously it had allowed auto-helms only on double-handed entries.

I spoke with two people in the RORC office and they said that before they approved autohelm use for all boats in offshore races, with no penalty under IRC, they did “significant research” and concluded that there was no advantage derived by using an autohelm, as opposed to a fully-crewed yacht. One of the people I spoke with said that even the Vendee Globe technology is “only 95%” as good as an experienced helmsman.

The argument from the double-handers appears to be that if the 100 footers can use canting keels and powered winches, then auto-helms should be considered just another “device”. It is hard to argue with that logic. They all use stored power to manipulate and/or adjust moveable appendages.

The Club (sic) believes further understanding needs to be gained regarding the full capacity of this technology and how it will be accommodated within current handicap rating systems. As such, the Club will be amending the 2020 Rolex Sydney Hobart Notice of Race to reflect that two-handed entrants will be scored within their own handicap category divisions and not be eligible to compete against fully crewed boats in divisions or for the overall race win.

This decision follows a zoom meeting on September 11 between Commodore Noel Cornish and the double-handed entrants. It is claimed by several entrants who were part of the zoom meeting that Cornish told them “a lobby group of influential members” was threatening to protest in Hobart if double-handers were included in the race for overall honours.

Apparently the logic was that double-handers would eventually start using the sophisticated auto-helms fitted to Vendee Globe boats and that would give them an unfair advantage over fully crewed boats that are not allowed to use auto-helm. While acknowledging that no-one who had entered this year's RSH would be using such technology, it is claimed that the club indicated they didn't want to set a precedent that could be held against them in future years.

This argument does not hold water. When they announced that all yachts could use autohelms without IRC penalty in offshore races, the RORC made it clear that the decision would be thoroughly reviewed after two years and, in the interim, could be revoked at any time if credible evidence was presented that the use of autopilots gave an unfair advantage.

One entrant who was part of the Zoom meeting told me, “When it was pointed out to Cornish that the CYCA should follow RORC's lead and allow APs on all boats – DH and fully crewed – he told us (and this is quite funny, really) that this had been put to the Lobby Group but they didn’t like this either, because there wasn’t enough time to get APs fitted to their boats before Christmas, ignoring the fact that they already have the same B&G or Raymarine APs that we have, on their boats for their delivery trips.

“Cornish told us that the compromise the club had come up with was that the DH group would be split into two – those who wanted to be included as eligible for the Division and Tattersall trophies had to promise to use their AP in Heading Mode only. Those that didn’t like this could use their APs in Wind Mode but would be eligible only for a separate DH Trophy
“Many of the meeting attendees (including me) told Cornish that this was a dumb idea, would compromise safety and encourage cheating anyway and RORC's lead should be followed.
“Cornish replied that the club had made their decision and an announcement would be made the following week – ie by 18 Sept.
“This didn’t happen and they obviously spent another six weeks thinking about it all, and made the announcement you saw last week.”
It is unlikely the decision will be revoked this year, owing to lack of time for common sense to prevail. But there are certainly some owners of big, expensive yachts who need to take a long hard look at themselves and ask why they are afraid of being beaten by low-budget and much smaller boats crewed by only two people!