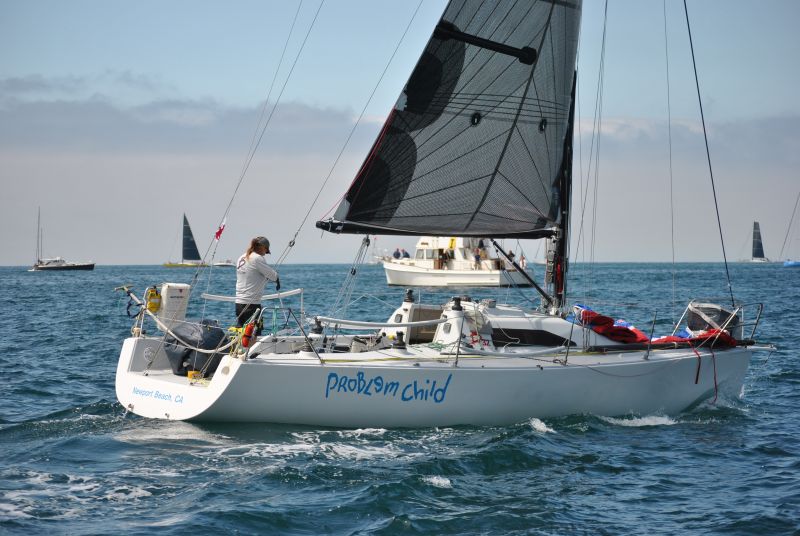 Newport Beach, CA – The recent upswing in interest in double-handed offshore racing may be driven by this new medal format appearing in the next 2024 Olympic cycle, but its been prevalent for a few years now in the Newport to Ensenada International Yacht Race. Two entries in this year's 73rd edition of the race describe their interest in DH racing from different perspectives:

Dana Point-based Rod Woods has just a little experience with racing offshore: he reckons on average he raced his Olson 30 over 38 weekends a year for many years, and he has completed some 33 Newport to Ensenada races. So at age 79 he’s ready to throttle back just a little yet still be part of the race action in this year’s annual NOSA event.

So along with his step-daughter Tamara, Rod has been the first this year to enter the Newport to Dana Point Race (N2DP), the shortest of the three race options in the N2E event. Their entry is on their Hunter 33 Pillow Talk, which they plan to double-hand in the PHRF non-Spinnaker Class, a class they won last year in the same division.

“Its really just a relaxing sail down the coast,” he said. “Mostly its a comfortable headsail reach which is the perfect length. We all start together, and we watch those with spinnakers go off fast but then have to sag east towards the shore where there’s no wind, and we often watch them sit there and park until they give up and motor out. Our strategy is to stay away from the coast, about 5 miles out, and stay in the breeze, then turn in towards the finish. This has worked out well.”

Rod and Tamara hope to repeat their win from last year, and encourage others to enter too. Maybe even try, as they do, doing this casual race double-handed.

“This race is a great way to participate and have fun if you don’t have the time to race all the way to Ensenada. I recommend it highly.”

Thusfar Rod and Tamara are one of only six Double-handed entries among the three races – N2E, N2SD and N2DP – but its expected more will come in the coming weeks when entries push past the 100 mark and beyond.

Like Rod Woods, Dan Rossen is also a seasoned offshore sailor who has entered this year’s 73rd Newport to Ensenada International Yacht Race as a double-handed entry. And with his perennial racing partner Richard Whitley he is also a past class winner on their B-32 Problem Child. In fact, Dan claims they have won the DH trophy on the N2E some 7 times, more than half the number of times he has also sailed this race in full-crew mode.

Both are long-term dedicated sailors on the Southern California racing scene, with give-back contributions to the sport as a Commodore (Rod) and as a PHRF Board member (Dan). Both have also had light fast boats: Rod with his Olson 30 and Dan with the B-32.

But the similarities seem to end there, because while Rod aspires to have a nice cruise down the coast to his home port in Dana Point, Dan is still gung-ho to head out to sea for the overnight challenge of racing 125 miles to Ensenada with just he and Richard to share all roles on board: steering, trimming, navigating, performing sail changes when needed, maybe even sleeping and eating. Dan has boundless energy for a spry 60-year old, and has tremendous enthusiasm for competitive sailing.

“I got a late start in this sport, in the mid-‘90’s,” he claims, “and did my first N2E in about 2000, with mid-fleet results for several years. Then we gradually got better and better, and with Richard we’ve been really doing well. Last year Richard could not make it, so Pete Heck and I raced and had a great time.”

More than that: they also won the same perpetual trophy Dan won several times in previous years racing with Richard: the Volvo Trophy for best corrected time for a DH entry. This prestigious award is one of a staggering list of 38 perpetual awards and trophies offered in N2E this year.

Does Dan get complacent about this impressive winning streak? Not really.

“Every race is a little different, or sometimes a lot, but racing double-handed always keeps you on your toes,” he says. For example, on board Problem Child, they have an auto-pilot for the tiller helm, but generally don’t want to use it except in the lightest air in drifting conditions, when he says it takes maximum concentration on sail trim, with one team mate on deck and the other below getting sleep due to the exhaustion produced from such high focus.

As for the finish venue in Ensenada, Dan says he loves it.

“I love the town and the atmosphere there,” he said. I really like the change of being in another culture, walking around, and I like to bring back gifts like those woven bracelets for my grand daughter. I’m really looking forward to going again.”

More info found on the event website at www.nosa.org and the direct link to Registration is at here.