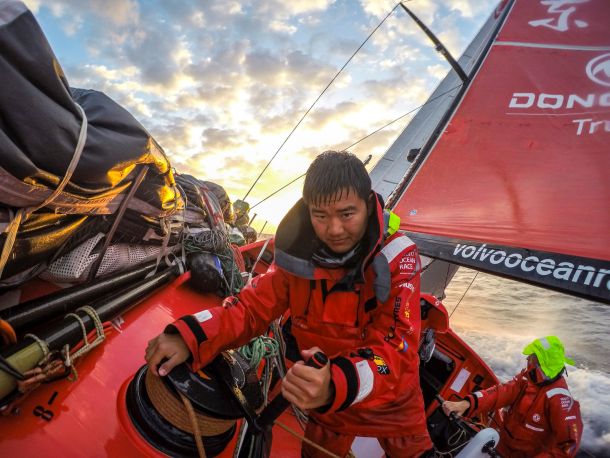 ALICANTE, Spain, February 18 – China’s Dongfeng Race Team (Charles Caudrelier/FRA) were in no mood to celebrate Chinese New Year on Wednesday after being relegated to the back of the fleet for the first time since the Volvo Ocean Race 2014-15 started.

Caudrelier’s crew entered the 5,264-nautical mile (nm) Leg 4 from their home port of Sanya to Auckland as overall leaders by a single point, following victory on the previous stage.

However, the crew have been struggling to re-establish their grip on the fleet and the latest setback was a problem with their mast track, which has broken free in one area. The track attaches the mainsail to the mast.

This is the third time this issue has hampered the team during the race. They have made a temporary fix with lashings to secure the track to the mast, but will want to make a more permanent repair as soon as they reach lighter winds in the middle of the Pacific Ocean.

Dongfeng’s French skipper Caudrelier was already not in the best of humours after opting against a more northerly route towards Taiwan, early in the leg, after exiting the Luzon Strait.

One of his biggest rivals for the overall prize, Bouwe Bekking of Team Brunel (NED), left Dongfeng Race Team in their wake after deciding to take that navigational gamble, and on Wednesday, the Dutch boat still led the fleet by just under 50nm.

“I was too conservative,” Caudrelier later conceded.

Chinese sailor, Yang Jiru (English name ‘Wolf’), summed up the subdued atmosphere on board his boat on Tuesday night: “The condition we are in is not ideal at all, that’s why everyone’s disappointed and also a bit upset. We are all focusing on the race and therefore don’t have much desire to celebrate the Chinese New Year.

“It’s just that we're not really in the mood to celebrate. The race is still very intense, especially since we are falling behind a lot at the moment. The only wish I have is to make a 'phone call with my family at midnight.

“But if you ask me if I have any doubt (about what I’m doing), the answer is no, I don’t feel any regret.”

Despite the glum mood, Dongfeng Race Team were certainly not out of contention altogether for good leg points (1 for first, 6 for last), with some 2,700nm left to sail before reaching their destination in New Zealand. At 1010 UTC, they had managed to cut 38nm off Team Brunel’s lead in the previous three hours and trailed by just 77nm.

Fifth-placed Team SCA (Sam Davies/GBR), who had also taken the ‘northern route’ with Brunel on this leg, but without making the same gains as the Dutch team, were powering along just 61.1nm behind the leaders.

The pair had finished second and third in Sanya last month respectively, with Team Alvimedica securing their first podium finish in a race which has shown a steady improvement for them throughout.

MAPFRE (Xabi Fernández/ESP), in fourth, 54.8nm behind, had one major cause for cheer – they have fixed, with the collaboration of Cobham and Race HQ, for their time being at least, a problem with an antenna and so have restored full communications with Race Control.

This means that they too can receive all the weather data, the same as the other teams in the fleet. Prior to that, they had been sailing ‘blind’ since Saturday evening, unable to plot the optimum course based on the in-depth weather forecasts they were missing.

The fleet is due to arrive in Auckland in around a week’s time on February 28-March 1.