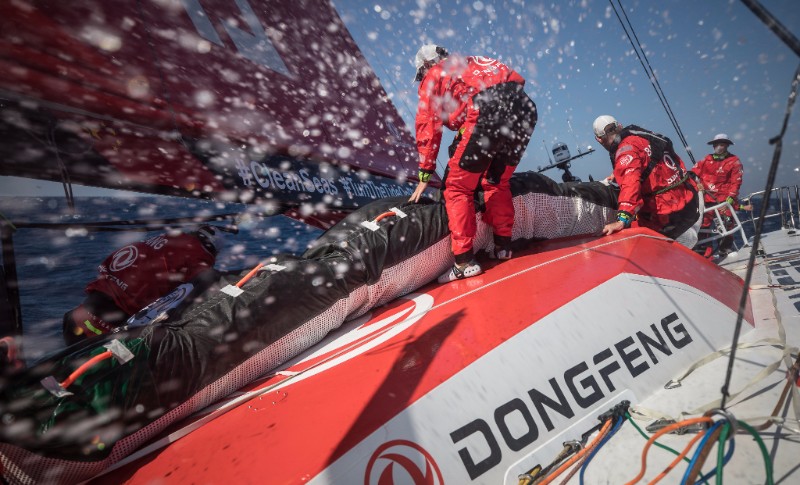 After thousands of miles of training and months of preparation, Dongfeng Race Team, which carries the hopes of China in the Volvo Ocean Race 2017-18, today unveiled its crew for the first leg of the race from Alicante to Lisbon.

Speaking at its pre-start press conference at the Dongfeng Pavilion in the Volvo Ocean Race Village at Alicante ahead of tomorrow’s race start, skipper Charles Caudrelier said he is feeling far more confident at the start of this race than he did three years ago when Dongfeng Race Team made its Volvo Ocean Race debut.

Dongfeng Race Team is exclusively sponsored by Dongfeng Motor Corporation, the Chinese truck and car manufacturer based in Wuhan in China, and today’s announcement was made in the presence of senior company executives who are in Alicante for the first stage of one of the world’s toughest professional sporting events.

“Tomorrow is the day of the start of the Volvo Ocean Race. Of course, I feel pressure because this is a very important moment, but I’m also much more confident compared to last time,” said Caudrelier.

“Then, we didn’t know how well we would perform or how strong our team would be. Today, I think I have my dream team. We have sailors from all around the world and I think we have really managed over the last six months to build something strong together, with trust and full respect for each other.”

“Now we need to be able to fight and stay strong even if we have lows because during such a long race, everything can happen, and the level of the competition is so high that we need to remind ourselves that we will go through tough moments,” added Caudrelier, whose team won the VOR section of the Rolex Fastnet Race in August.

He Wei, the Deputy Secretary of Dongfeng Motor Corporation, said the company was looking forward to its second taste of the thrills of the Volvo Ocean Race.

“All of us at Dongfeng Motor Corporation wish Dongfeng Race Team the very best of luck in the new edition of the Volvo Ocean Race and we hope that, through their professional skills and commitment to continuous progress, they will achieve more excellent results,” he said.

Dongfeng Race Team, which is committed to developing the sport of offshore sailing in China, has been training and preparing for the race since late last year and Bruno Dubois, the Team Director, said the sailors are now ready for action.

“So here we are, finally ready to compete in the Volvo Ocean Race 2017-18, one of the toughest events in professional sport that will test our skills, talent, team cohesion and endurance to the limits”, Dubois said.

“We will sail hard but will always compete in a sporting manner. We have no doubt about how difficult this race will be but, together with our sponsor, we will try to leave no stone unturned in our quest for success,” he added.

Chen Jinhao, also known to race fans as Horace, and who took part in the last race, said: “Thank you to Dongfeng Motor Corporation, thanks to Charles Caudrelier and thanks to the trust from all of my fellow teammates, to allow me once again to compete as a member of the Dongfeng Race Team representing China in the Volvo Ocean Race.

“Three years ago, when I was selected, Charles asked me: ‘Would you dare to work on the foredeck as the bowman?’ I agreed without any hesitation. A lot my friends and family do not understand because the bow is the most dangerous place to work on board.

“I finally became a crew member and participated in seven of nine legs in the last edition and managed to stand on the podium in third place overall with the full team at the end. I grew a lot in experience in the last race and became clearer about my own life goal – to become China's best sailor and help to promote the sport of sailing in China.”

Respected French match racing Olympian, Marie Riou, will be taking part for the first time in the Volvo Ocean Race: “I have two different feelings,” she said. “The first one is excitement. I can’t wait to start the leg and to leave the pontoon and sail for 10 days. The other part of me is scared because I have only sailed for seven days in one go on the boat so far. In a few days, I will start to discover what the world of offshore racing is really about.”

The stage from Alicante to Lisbon is the first of 11 legs in the 2017-18 Volvo Ocean Race which circumnavigates the globe via 12 stopover ports and approximately 45,000 nautical miles of ocean racing.

The opening leg starts at 1400 local time (1200 UTC) tomorrow and is expected to last around a week with the fleet heading out into the Atlantic and then rounding the Portuguese island of Porto Santo, northeast of Madeira, before finishing in Lisbon.