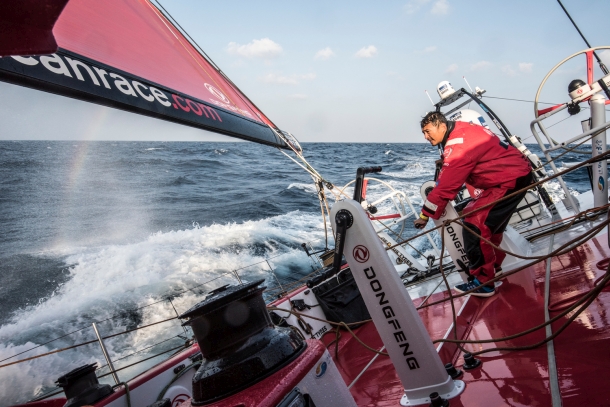 Dongfeng Race Team (Charles Caudrelier/FRA) continued to hold the edge in Leg 3 of the Volvo Ocean Race on Tuesday with the rest of the fleet bunched up behind and waiting for the opportunity to pounce.

For Caudrelier and his crew, the stage could not be more important: victory in Sanya would be the first time a Chinese boat has triumphed in a Volvo Ocean Race leg and the win would also take the team to the top of the overall standings.

The trio started Leg 3 from Abu Dhabi locked together on four points, but the 4,670nm stage to the southernmost point of China is still anyone’s to win with around 2,500nm left for the fleet to sail.

MAPFRE (Xabi Fernández/ESP) and Team Alvimedica (Charlie Enright/USA) are both very much in touch five nautical miles behind with Team SCA (Sam Davies/GBR) still in the hunt, a further 25nm adrift.

The six-strong fleet – depleted of Team Vestas Wind (Chris Nicholson/AUS) – is expected to reach its destination around January 25-26 depending on weather conditions but first has to navigate through the Malacca Strait.

The 500nm stretch, dividing the Indonesian island of Sumatra and Malaysia, is one of the busiest shipping lanes in the world and narrows to 1.5nm at one point. That bottleneck could well allow the chasing boats to catch Dongfeng Race Team – if they are still ahead at this point.

That, however, lies in the future – the fleet is expected to arrive in the Strait by the weekend – and for now it is making good progress through the Bay of Bengal after passing Sri Lanka.

Polluted waters continue to threaten their advance. Bekking summed up in a blog: “There was so much plastic in the water that I started counting in several intervals of 10 minutes for a duration of four hours, the amount of plastic I could see floating by.

“A scary result was the outcome. Every 37 seconds on average I saw a piece floating by, either big or small. I am not a scientist or researcher, but the total weight of this rubbish floating around in this part of the world must be enormous.”

Meanwhile, Team Vestas Wind continued its long journey from Malaysia to Italy on a Maersk Line ship for an eventual rebuild at the Persico yard in Bergamo.

It is expected to arrive on January 25 and will be transported with the help of Race sponsors GAC Pindar from Genoa to Persico. The target is a return to the race for the final two legs from Lisbon in June.