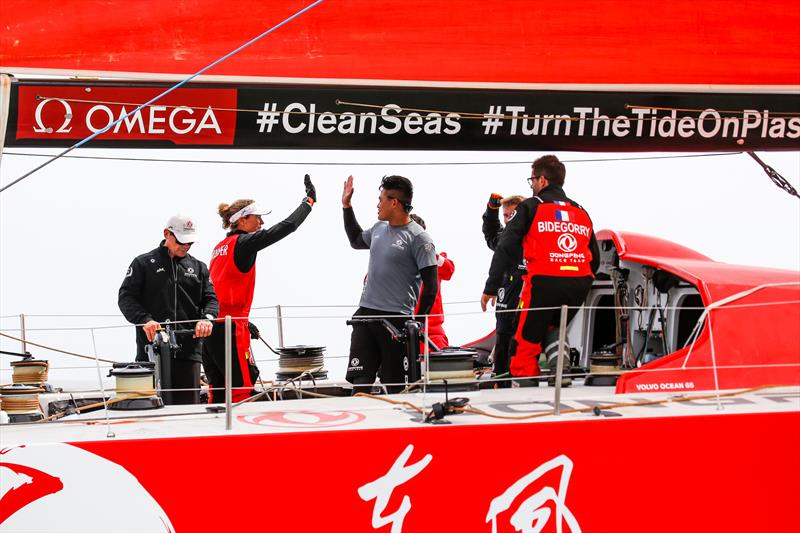 The top three teams in the In-Port Race Series for the Volvo Ocean Race held down the podium positions on Friday afternoon in Cardiff, as Dongfeng Race Team made a pass on the last lap of the race course to claim the win.

“We’re very happy. It’s always a pleasure to win the In-Port Race,” said skipper Charles Caudrelier. “I think we are making good progress on the inshore racing and for the team this is good for our morale ahead of the next two legs.”

The overall leader in the In-Port Series, Xabi Fernandez’s MAPFRE, limited the damage on the points table with second place, while Bouwe Bekking’s Team Brunel battled all afternoon to secure third place.

Conditions were good for racing, with wind near 10 knots and racing taking place in moderate currents during the turn of the tide. A large spectator fleet was on hand to enjoy the competition.

In the moments before the start gun fired, it was apparent Vestas 11th Hour Racing was vulnerable, close to the line with too much time to kill, Charlie Enright’s team was pushed over the line early by Team Brunel.

A split on the first leg of the course saw Simeon Tienpont’s team AkzoNobel lead at the top mark and hold on to that advantage for two laps of the race.

But on the second downwind leg, Caudrelier’s Dongfeng Race Team closed up on the run and split from AkzoNobel to the favoured side of the race course for the final upwind leg.

When the boats converged again near the top of the course, Caudrelier was in a strong position to tack directly ahead of AkzoNobel, to extend into a healthy lead for the run to the finish.

“I think we had very good speed today and we were able to tack and put them in our bad air and then he lost a lot,” Caudrelier explained.

it was a painful moment for AkzoNobel, who were pushed back all the way into third place, behind MAPFRE as well, before being passed by Brunel on the final run, eventually settling for fourth in a race the team had led for two laps of the course.

Vestas 11th Hour Racing fought back for a fifth place finish ahead of David Witt’s SHK/Scallywag and Dee Caffari’s Turn the Tide on Plastic.

If anything, the competition on Friday is a preview of what is in store on the final two legs of the Volvo Ocean Race.

Just three points separate Dongfeng Race Team (60) from MAPFRE (59) and Team Brunel (57) on the overall race leaderboard. All three teams were battling with intensity for a podium finish on Friday.

And all three teams have their sights firmly set on winning the next leg into Gothenburg to ensure they are in position to secure the race win on the final sprint into The Hague at the end of the month.

Should there be a tie on the overall race leaderboard at the end of the offshore legs, the In-Port Race Series standings will be used to break the tie. After today’s results, MAPFRE retain a considerable advantage in this respect (see standings below).