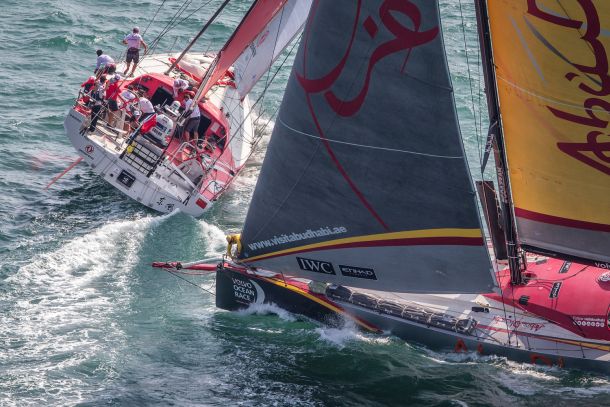 SANYA, China, February 7 – China’s Dongfeng Race Team (Charles Caudrelier/FRA) served up another glorious home victory in the Team Vestas Wind In-Port Race in Sanya on Saturday after an absorbing battle in the sun.

The team had already made race history last month by becoming the first Chinese-backed crew to win a leg in the 41-year-old event, when they claimed the third stage from Abu Dhabi to China, and now they have become the first to win an in-port race too.

They only achieved it after a battle-royal with the rest of the fleet, with the lead changing hands through the first four legs as, successively, Team Alvimedica (Charlie Enright/USA), Abu Dhabi Ocean Racing (Ian Walker/GBR) and Dongfeng Race Team snatched the advantage.

“Dongfeng means the wind from the east (in Chinese) and today the wind blew from the east – we're lucky in China,” said an elated Caudrelier afterwards.

Walker and the rest of the crew on Azzam will be more than satisfied with another solid podium finish in second place as it takes them four points clear of the fleet at the top of the In-Port Race Series table (see panel above and below*).

So far, we have had four different winners from four in-port races in a series that is just as closely fought as the offshore legs.

For so long, however, it was anyone’s guess who was going to emerge victorious from an enthralling tussle after the weather gods smiled benignly on the fleet just before the 1400 local time (UTC+8) start.

The wind suddenly picked up to 10 knots plus and all the fleet, with the exception of MAPFRE (Xabi Fernández/ESP), shot off from the starters’ gun.

The Spanish found themselves the wrong side of the starting line and had to cross it, turn 360 degrees, before bearing away up the course.

Team Alvimedica were the first to reach the first gate and they were still just in front at the second, but only after Abu Dhabi Ocean Racing had swapped the lead with them and Team Brunel had threatened to.

But Dongfeng, as ever, were sailing their own race and they found extra breeze to the left of a course, which was perfectly located for viewing for a sizeable and vocal local crowd in the Sanya sun.

By the fourth gate, Caudrelier seemed to have the race firmly in his grasp with a 200-metre advantage on the fleet, but Azzam discovered some extra pressure approaching the fifth and cut the lead to a mere 50 metres.

However, Caudrelier and his mixture of Chinese, French and Swedish sailors have already proved time after time in the event, that they are at their very best when they are under pressure, and they coolly kept Walker’s crew at bay to claim a deserved victory to huge cheers on the Sanya docks.

For MAPFRE, it was another disappointing day as they never recovered from their poor start. Team SCA (Sam Davies/GBR) sailed well after winning the previous in-port race in Abu Dhabi in early January, but failed to threaten the leaders here.