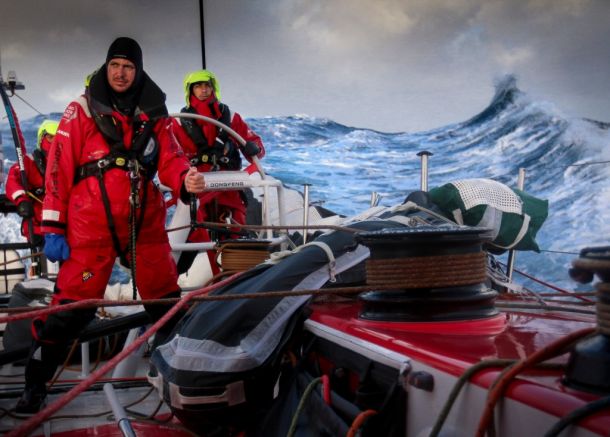 ALICANTE, Spain, March 26 – Dongfeng Race Team (Charles Caudrelier/FRA), almost literally knocked off their feet just 48 hours earlier, retook the Volvo Ocean Race Leg 5 lead on Thursday. The Chinese boat was one of three to crash on their sides in Chinese gybes on Tuesday as a heightened sea state and 40 knots of wind (75 kilometres per hour) played havoc with the fleet. MAPFRE (Iker Martínez/ESP) and Team SCA (Sam Davies/GBR) suffered similar setbacks though, mercifully, none of the sailors involved were injured in the incidents and all boats are now sailing normally.

As they have proved time and time again in the race, Caudrelier’s men react only positively to such setbacks. In Leg 4, their mast track needed an on-the-move repair for the third time in the race, yet they still recovered for third place in Auckland.

On Thursday morning (0940 UTC), while the overnight leaders were becalmed in a rare spell of respite from the brutal Southern Ocean conditions, Dongfeng Race Team found excellent pressure to make up 24 nautical miles (nm) in a three-hour period and move from fifth to first. Their lead, however, is still paper-thin in relative terms over the course of a 6,777nm, three-week leg from New Zealand to the south-east Brazilian port city of Itajaí. The fleet still has the notorious Cape Horn to negotiate, probably towards the end of the coming weekend, and then the south Atlantic in the run-in to Brazil next week.

They are currently expected to arrive around April 4.

Dongfeng’s Onboard Reporter, Yann Riou (FRA), not surprisingly, says that morale is sky high after taking the lead for the first time since the fleet left Auckland on March 18 – despite the challenges they are facing every hour.

“We have regular squalls interrupting us. It’s a constant switch between long periods of great surfing under blue skies and sunshine, and then intense periods of manoeuvres, often in the rain. Reef in, reef out, furl, unfurl,” he wrote in a blog from the boat. “The atmosphere onboard is excellent, but it will be even better once Cape Horn is behind us.”

The Chinese boat is ideally placed in both the leg and the race. The team shared the overall lead before setting out for Leg 5 with Abu Dhabi Ocean Racing (Ian Walker/GBR), both on eight points from four legs. The Emirati boat, however, had a sliver-thin advantage courtesy of a superior in-port series record.

Caudrelier and his crew can hardly rest on their laurels on Leg 5. At 0940 UTC on Thursday, the first five boats were all within seven miles of each other, with Team Alvimedica (Charlie Enright/USA), Team Brunel (Bouwe Bekking/NED), Abu Dhabi Ocean Racing and MAPFRE leading the chase (see panel above).

Team SCA were the fastest in the fleet over the early hours of Thursday, chopping huge chunks off their earlier deficit following Tuesday’s Chinese gybe. They trailed the pack by some 86nm at 0940 UTC, but were gaining all the time in relatively strong pressure.

We could yet see a completely bunched fleet negotiating Cape Horn.