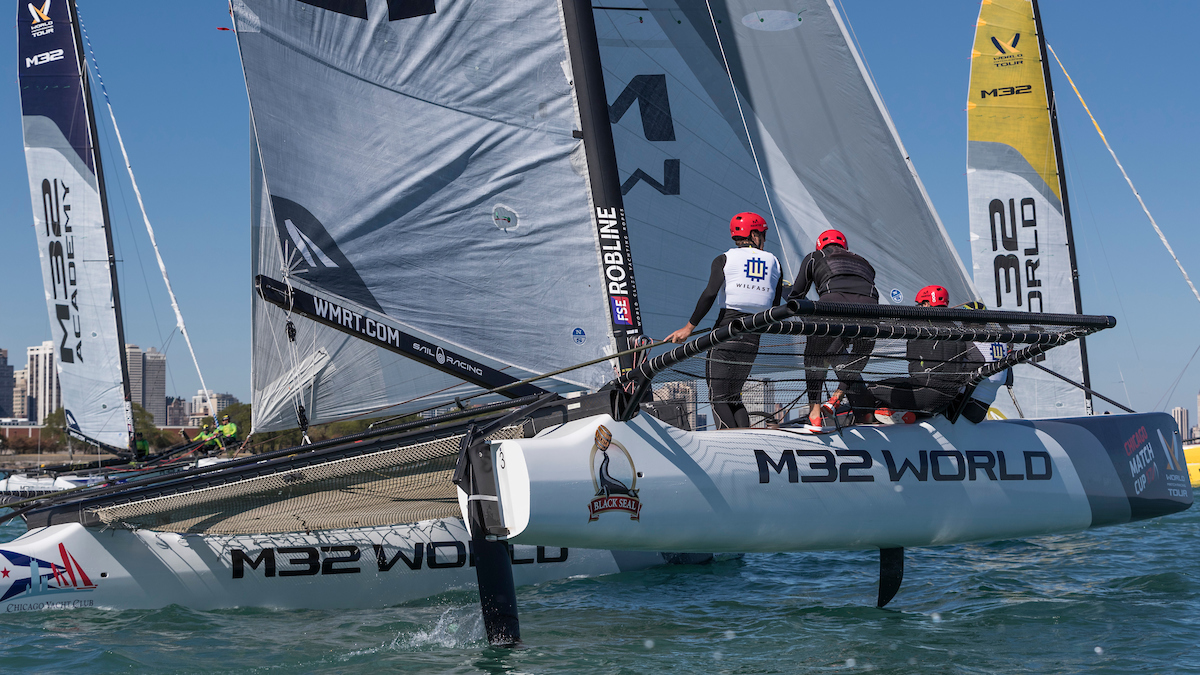 Chicago (IL), USA – September 28, 2017 – Plenty of action at the final day of qualifying at Chicago Match Cup that saw both dominant performances and nail-biting upsets as the Super 16 Stage roster was decided off Navy Pier.

The day began with Group 2 picking up where they left off and Chris Steele looking to continue his dominance after notching a string of first and second placed finishes yesterday. Sure enough, the master class continued, with the Kiwi skipper racking up a 14-point advantage over next placed Nicklas Dackhammar from Sweden.

“We had a bit of hiccup in race 3, got bounced around and finished fifth. I’m proud of the guys and how we came back and finished today with a race win. Obviously it looks good on the scoreboard but we have some things to work on and we’re just trying to improve race by race” Said Steele of his day.

Group 3 had Taylor Canfield finishing the business he began the day before with two first-place finishes, however he risked loosing his top seed position in the last race after an uncharacteristic start that saw him needing to climb his way through the fleet to finish fourth.

However, the biggest dramas were reserved for the last flight of the day as Group 1 arrived at Navy Pier to finish the close-knit battle that they’d started the day before.

While Phil Robertson and Yann Guichard were lock-ins to secure the first and second spots, the wrestling match between Team Magenta 32 skippered by Sally Barkow and local entry Heart of America Racing skippered by America’s Cup sailor Andrew Campbell in the middle of the pack was nothing short of epic.

Having scored his first win in an M32 at a World Match Racing Tour event, Campbell began Race 9 of the Qualifying Round in third place at the first reaching mark, falling behind Barkow. Barkow was looking to slot into a strong result throughout the entire race with Campbell nipping at her heels when the final top mark saw a massive shake up as the fleet bunched up around the left hand turning mark.

A slight moment of hesitation at the top gate meant that Barkow was late to tack to the left mark and Campbell took full advantage speeding around the right mark to set up for a long split down the right hand side of the course.

With the pack of four teams, including Team Magenta 32, gybing towards the finish line next to the Pier, Campbell waited patiently to pull the trigger before gybing onto starboard, practically perpendicular to the finish line.

Right-of-way sealed Team Magenta 32’s fate as Campbell slid into the finish and secured a fourth place finish, good enough to climb the standings, just one point shy of the podium in the group.

While the team was obviously still learning the boat, the crew of veteran America’s Cup sailors was clearly learning very quickly how to race the M32, stating, “It feels like we are definitely on the upswing through the fleet racing. Finishing dead last in beginning to doing much better in afternoon is a good indicator of our progress.”

With the forecast for breeze on tomorrow, Campbell is excited at the prospect of a wild and windy day on the water. “Tomorrow will be windy and that will be a new look for us. I don’t think any of us have put a reef in this boat so that will be another new experience, so we will go out there and have fun and for the most part, just winging it.” As the program moves to match racing for Campbell tomorrow, Andrew and the team seemed thrilled at the prospect. “We think it might be a little bit easier at times – after the fleet racing where it was fighting tooth and nail, we are expecting the chance to get out on our own will help us a bit. There is no love lost between racing with any of these teams and it’s been fun to watch. It’s put our feet to the fire for the first couple of days. We are looking forward to the match racing.”

With the Super 16 Round all but decided, a Sail Off between sixth-place finishers Markus Edegran, Matt Jerwood, and Harry Price saw Edegran the first to be eliminated with the second elimination decided tomorrow morning.

The day closed out with Team Magenta 32 and Heart of America continuing their sailing development programs, taking out 75 local Chicago junior sailors. These hopeful future M32 sailors were thrilled at the chance to get on board and sail these incredible catamarans alongside their hometown heroes.