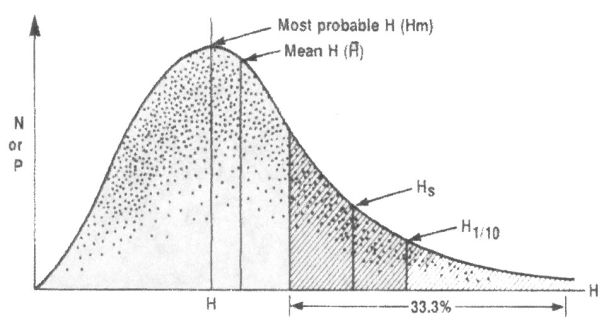 Following is a good primer on predicting wave heights after reading weather forecasts. It was published by the National Oceanic Atmospheric Administration (NOAA) way back in 2006 but it is still a useful guide today.

It includes some useful charts and mathematical formulae. Take a peek

When Do Ocean Waves Become 'Significant'? A Closer Look at Wave Forecasts

Anyone who has spent time on a vessel, large or small, can probably recall an encounter with significant waves.

Of course, the size of wave that someone considers to be 'significant' is very subjective and dependent on the size of the vessel on which that person's encounter took place.

When my family and I moved to Juneau a number of years ago, we sailed on the 408 foot Alaska State Ferry 'Matanuska' from Bellingham, WA. While crossing Queen Charlotte Sound off British Columbia in gale force winds on a Saturday afternoon, the ship rolled through seas I estimated to be 15 or 20 feet high on average.

We were watching a movie in a theatre room on the fourth deck when, out of the blue, the port side windows were slammed by a drenching wave. As the water poured off the deck and back into the Sound, my wife and I exchanged silent glances. Not long before this power-washing wave hit, people were outside our window gripping the rail and squinting with awe into the wind that required a forward lean and wide stance to manoeuvre through.

Until that wave, our seats were at least 15 feet above the tops of the foaming wave crests. In my opinion, that solitary wave that hit the side of the 4th deck of the Matanuska was certainly a significant one. But the term 'significant wave height' has a specific definition, and anyone using marine weather information should have a clear understanding of what it means.

How to forecast waves…