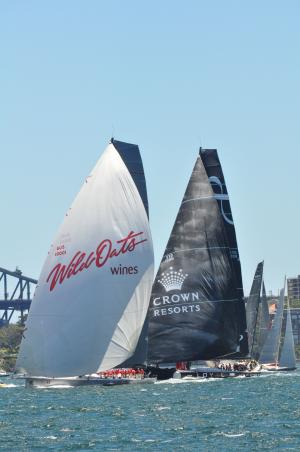 At the close of entries for the Land Rover Sydney Gold Coast Yacht Race, a diverse fleet of 57 yachts are readying for what doubles as the opening race of the Cruising Yacht Club of Australia’s Blue Water Point Score (BWPS), to start on Sydney Harbour at 1.00pm on Saturday 26 July.

Bob Oatley’s line honours open record holder Wild Oats XI and Anthony Bell’s Perpetual LOYAL will continue their head-to-head super-maxi line honours combat, but will have Queensland’s Black Jack to contend with too. Peter Harburg’s Volvo 70 finished third on line in a thriller last year with few sea miles in the log as Harburg had just purchased and refitted the boat.

Hodgkinson, the 2012 Ocean Racer of the Year, went on to win the Gosford Lord Howe Island Yacht Race in April. Coming to grips with the canting keeled Cookson 50 he took possession of a year ago, and adding Mike Green, one of the best ocean racing helmsmen to his strong crew line-up, Hodgkinson is primed to at least defend his Division 0 win of last year’s Gold Coast race.

Roger Hickman, recently returned from contesting the Etchells Worlds in Rhode Island, is revved up to defend his BWPS title, one of five won to-date and the second with Wild Rose, the Farr 43 he affectionately refers to as his ‘old girl’.

Hickman, who says: “The Blue Water Pointscore is the pinnacle of ocean racing – it’s an honour to win it even once,” has continued his winning form, taking out Division 2 of the NSW IRC Championship in April and going on to win Class C in the Australian IRC Championship. Wild Rose was also in the winning 2013 Southern Cross Cup team in company with Victoire and Patrice.

Straight after launching his latest Patrice, a Ker 46, in November, Tony Kirby made the podium a few times before his yacht did not hold up to finish the Hobart. “It was shattering at the time, but it’s all better now,” he offered. “I’ve straightened out a few issues and we’re a very settled crew now, so we’re looking forward to the race.”

And while Kirby will sail the race against his previous yacht, Patrice Six, now in the hands of new owner, Shaun Lane from Middle Harbour Yacht Club, Paul Clitheroe will also test out his new purchase, the 2008 Rolex Sydney Hobart winner, Quest.

Interstate entries number nine, including Taswegians Robbie Fisher and Paul Mara with the famous Helsal 3 and Michael Pritchard with his Beneteau First 45, Audere, which will have company from Jason Ward’s same design Concubine from South Australia. Queensland and Victoria are each fielding three entries.

CYCA Commodore Howard Piggottacknowledged the new race sponsor: “I would like to thank our naming rights sponsor, Land Rover Australia, for their commitment to the sport of sailing in Australia and the Club.

The CYCA’s proven yacht tacker system will allow family, friends and yachting enthusiasts to follow the race and their favourite yachts for its duration. Each yacht will be fitted with a Yellowbrick tracker that will obtain a position using the GPS satellite network, and then transmit the position back to Yellowbrick HQ using the Iridium satellite network.

Each yacht’s position is then visualised on the race yacht tracker map,or overlaid on Google Earth. In addition, the yacht tracker system also shows distance to finish line and progressive corrected time positions under the IRC, ORCi and PHS handicap divisions.