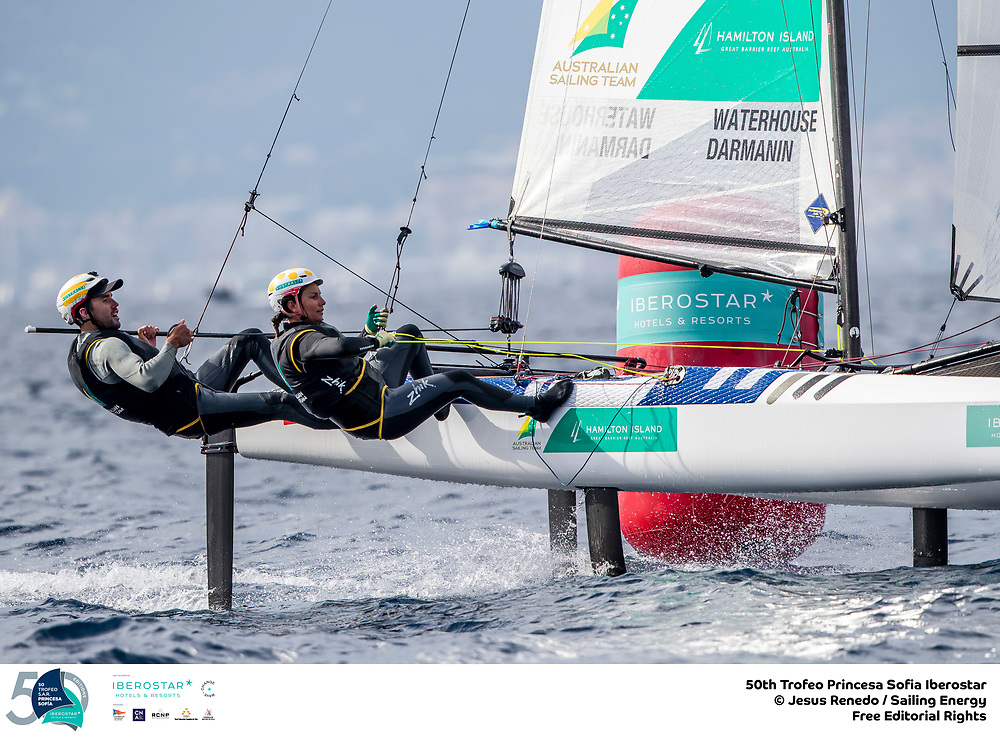 The Australian Sailing Team had a mixed opening day at the Olympic classes Princess Sofia Trophy Iberostar in Palma, Mallorca – Natasha Bryant and Annie Wilmot got off to a flying start in the 49erFX skiff, but were subsequently protested in Race 2 and dropped to second place.

Originally the pair’s scorecard read 1-2-3 after three races, but changed after the protest. “It was an incident after the start of the second race. The Italian girl hit our boat with her hand – I think the protest was invalid, but it happens,” Bryant said.

“We just have to put the DSQ behind us. It’s a long week, we were bound to have a tricky one, it just happened to be on the first day,” she said. “Otherwise, we are really happy with the day. We don’t usually have the goal to lead a regatta on the first day, but it’s good to be up there, especially after we waited around all day for the sea breeze that came in late in the afternoon at 5 to 8 knots.

“It was a very good course – it made the racing tight. Our first start was really good; we nailed it mid-line and put ourselves ahead from the beginning.  Our second start wasn’t that good, but we chipped away at the fleet upwind – and the same with the third race,” she said.

The 470’s finished their two races, with Mat Belcher and Will Ryan initially second overall after scoring 5, 1 results in the 470 Men’s, but were disqualified from the first race and dropped down to 37th overall. Chris Charlwood and Josh Dawson had a solid day for seventh overall, while Nia Jerwood and Monique de Vries are 19th in the 470 Women’s.

“We got a DSQ for an incomplete 720 after receiving a Yellow Flag (for pumping) from the start of the first race. We did the turns immediately, but they said the time between them was too long,” Belcher remarked. “We are sailing well, so we will take it on the chin and go out tomorrow with a positive attitude.”

Jason Waterhouse and Lisa Darmanin finished second in the opening Nacra 17 race, then backed up with fifth and third places for sixth overall, on a leaderboard that is very tight at the top: “Everyone seems to be at their best on Day 1. I think things will change during the week,” Darmanin commented.

On the conditions, she said: “The first race was in 4 knots and we had a disastrous start, but worked our way back. We waited for an hour before the next race, because of a 180 degree wind shift. The breeze filled in at 8-11 knots on choppy water. We had two good races, with good starts, so happy with those.

“In terms of quality, everyone is here – except Nathan and Haylee,” she said of the Australian Outteridge siblings.

Racing was due to start at 11am in all but the Men’s 49er skiff (their first race was scheduled for 1pm), but the AP flag was flying across all courses, as there was not enough stable breeze for racing. Crews were held ashore until afternoon, when finally they headed out to the course areas.

Commenting on the Team’s results, Iain Murray, the AST Performance Director said: “Mat and Will had a good day. They only got news of the protest when they came ashore. Chris and Josh had a solid start too.

“Natasha and Annie sailed really well, so it’s disappointing the protest went that way. On the water, they had a 1,2,3 – it shows they have come a long way – all the girls in the class have. They’ve stepped up the ladder a lot,” he said.

“Jason and Lisa also had a good day, but Jake had a tough day at the office – a penalty in one race – not a great start to the Finn competition.”

Murray finished: “A long day for all really, we were out there nine hours. The 49ers did not get on the water at all.”

Racing at Palma continues from 11am local tomorrow and finishes on Saturday, 6 April, 2019.  There are 1225 sailors from 67 nations competing and the Australian Sailing Team squad is representing in the 470 Men’s, 470 Women’s, 49er, 49erFX, Nacra 17 and Finn classes.

Here is the regatta report for other countries after the first day.

A long opening day of the 50th anniversary edition of the Trofeo Princesa Sofia IBEROSTAR was more frustrating for the classes which were sent out to race earlier in the day, the Nacra 17, Lasers and Laser Radials racing out from Ca’n Pastilla had to contend with an unsettled, very light offshore wind before the afternoon sea breeze which took time to fill.

The classes which started later had the best of the day, the 470s and FX’s required to spend less time on the water waiting. The hotly contested 470 fleets, Men and Womens, enjoyed two decent races in the 8-10kts breeze on the Bay of Palma. Even the sunshine made a welcome return.

The return to Europe and the Trofeo Princesa Sofia IBEROSTAR is always highly anticipated by Australia’s hugely experienced Mat Belcher, double Olympic 470 medallist, and Will Ryan. The 2018 class champions here made a solid start to their European season with a fifth and a first to lie second in the Mens 470 behind Spain’s Miami World Cup winners Jordi Xammer and Nicolas Rodriguez.

“It is good way to start out first day back on the race courses in Europe. The competition was really good and it was a great decision to have us wait for the wind. We had 8-11kts and great racing, so much so it already makes you want to come back next year.”

“We got here about a week ago and so we are keeping it fresh.” Belcher reported, “I have a young family now and I have to try and have a balanced life. But it is great to be back in the with the main guys. We are highly motivated and to start off like we did today is good.”

With the 2020 Tokyo Olympic regatta just 15 months away Belcher confirms that the top of the 470 fleet is racing at an exceptional level.

“We have so much experience and have been training pretty hard in Australia. But we love it here and the conditions match our style and so we always feel very comfortable here.”

“Every time we come back to the fleet we are amazed at how much the everything moves on. The level gets higher and higher. The racing, the dynamics of how people are racing and sailing the boat, the finesse, the detail, how active they are. There are too many good teams!. There are a bunch of younger guys coming through and really sticking it to us.”

“The list of what we have to improve on is too big. We have been sailing these boats for nearly two decades and the more you are this level, the more you realise what you have to do. You have to keep working harder and for us it is all about next year.” Belcher concludes.

Olympic 470 champion Hannah Mills and Eilidh McIntyre also made a solid opening for the British team posting a 3,4, to lead the Womens class. Their GBR compatriots in the FX fleet Charlotte Dobson and Saskia Tidey have a share of the top place along with Australia’s Natasha Bryant and Annie Wilmot.

With the 2020 Olympic regatta just over 15 months away this event figures highly in selections for the Olymipic test event. After medalling in Miami Dobson and Tidey will have this front of mind through the event, just as the closely matched British 49er pairs will be among the many, many teams looking to make a firm statement on the Bay of Palma.

Tidey said, “There's a huge fleet of FXs here and it's going to be a big week. We're really happy with the solid day that we had. We couldn't have asked for any more. It sets us off on the right foot and it's a good position to build on.”

Winner of the Laser Radial class here last year Denmark’s Anne Marie Rindom went on to take bronze in Aarhus at last year’s world championship. She made the best possible start to her Sofia title defence with two solid wins in the light airs today.

The USA’s Paige Railey has been in the Radial for 15 years on and off and has won five world championship medals. After a good second place in Miami in January she, too, wants to follow that up here with a complementary finish to stake her claim to the American berth at the test event:

“This is part of our test event trials and so I would like to just secure that spot and get to that event. I am looking at that but really I take it one race at a time. We have done a lot of work here and right now I am just wishing those normal conditions would come in so we could see it. I am frustrated today but in general I feel like things are going really, really well.” Railey commented.

The Nacra fleets ran three races across the transition between the breezes. Germany’s Paul Kolhoff and Alicia Stuhlemmer count two wins from three races to lead.

Australia’s Olympic silver medallists Jason Waterhouse and Lisa Darmanin, Miami winners, are sixth. Waterhouse comments, “We made a few silly mistakes today. We are a little rusty in terms of racing. But we have some good things up our sleeves. The way we approach the racing is good, today was tricky in the offshore in the morning then adapting to the sea breeze and we are happy with 2,5,3 on Day 1.”

“We are heading towards the pointy end of the Olympic cycle now and so everyone is knuckled down, working on their weaknesses. We are just doing the same and keeping an eye on everyone to see if we can learn a thing or two along the way.”

“Today the fleet was really close, it was awesome, it was congested with good action at the front end.”

In the Finn class Olympic champion, Britain’s Giles Scott bounced back from a disappointing first race to win the second comfortably.