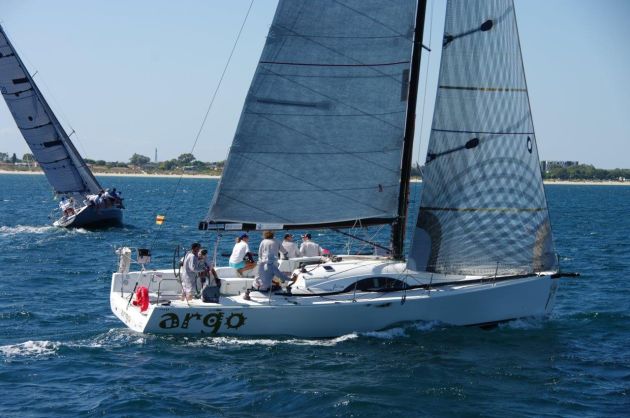 Western Australia’s Rockingham Race Weekend was held on 28 and 29 November. Power and sail took part in the event and enjoyed the activities on the water and on-shore. Racing for the yachts forms part of the Farrawa Cup Series and the WA Offshore Series.

On Saturday morning, sailors were welcomed to the start line by a 10 knot southerly breeze which increased to a steady 15 knots for the rest of the day.

Off first were the double-handed yachts, followed by Division Three. It was Division Two who caused the most excitement with Robert Halvorsen’s Giddy Up holding more than half the fleet on a course which took them to the wrong side of the start boat. It was controlled chaos as the yachts avoided the start boat, tacked over and circled back to start the race. One of the circling yachts was close rival, Chris Higham’s Argo. This jump was all the team on Giddy Up needed finishing two minutes ahead of Argo and placing first and second respectively on corrected time.

Division One didn’t behave themselves either, Optimus Prime and Dirty Deeds challenged each other on the line which led to Trevor Taylor’s Optimus Prime being called over early and having to return. This gave the GP 42, Dirty Deeds a clean run at the race to Rockingham where she finished first across the line and overall ahead of Optimus Prime and Brian Todd’s Sue Sea.

The fleet of yachts were greeted by The Cruising Yacht Club of WA and moored in the bay with the power yachts who had enjoyed a leisurely cruise to Rockingham. Participants and supporters enjoyed socialising and the live band at TCYC, they always put on a great show for the annual event.

Yachts and power boats looked magnificent moored in the bay on Sunday morning, but the yachts soon set sail for their windward-leeward race in the bay. The windward marks were close to the moorings in front of TCYC which made for a great show for the spectators. In Division Three, racing was tight between Phil Sommerville- Ryan’s Huckleberry and Simon Torvaldsen’s Blondie. The two S&S 34’s finishing only 31 seconds apart.

After the windward-leeward race, yachts lined up for the Gordon Craig Ocean Race to take them north back to Fremantle. The south-westerly wind was on a steady increase and the fleet started in 15-18 knots. The smaller yachts were off first and they raced a lap of the bay before heading on a downwind run back to the south mole finish line in Fremantle. As the four fleets left Cockburn Sound the wind was up around 20 knots and this provided quite a challenge for many teams.

For the first time this year a Youth Cup Series was included in the Rockingham Race Weekend to encourage participation of young adults in offshore racing. Eight yachts registered for this additional component to the weekend event with fifteen under 25-year-olds competing. Great to see the young sailors getting out offshore, RFBYC hope to further build on this initiative for future events.

Young sailor Chloe was one of the youngest competitors at only 11 years old. She raced on-board Huckleberry and had an exciting race back with the spinnaker up all the way, also aboard was blind sailor Ryan Honschooten. Speaking with owner Phil Sommerville-Ryan, he was very pleased with his crew and had an enjoyable weekend. Phil was impressed by Ryan’s abilities. “He is one hundred percent switched on with awareness on the boat, the trouble we have is we sometimes forget he is blind.”

The team are working on a sound signal system for Huckeberry so that Ryan can steer her in future offshore races. They are also keen to race in the Rolex Sydney Hobart Yacht Race and hope to get across for the great race next year.

Full results for the Dolphin Race, Windward-Leeward Race and Gordon Craig Ocean Race can be viewed at: http://www.rfbyc.asn.au/content/on-water/fleets/rockingham-race-weekend.php