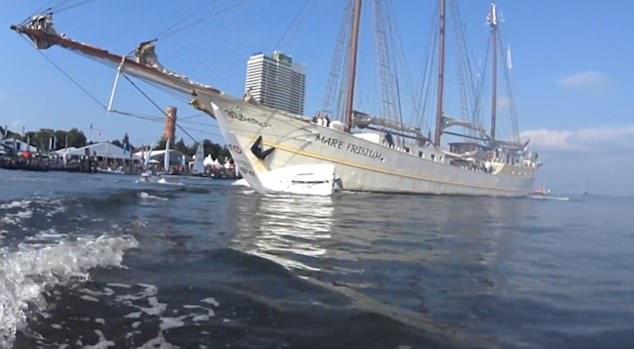 The Daily Mail reports of a terrifying incident during an event at the Travemünde Woche in Germany in which an RS Aero sailor was rammed by the tall ship Mare Frisium.

According to the report, the male sailor could be heard trying to reason with the ship as he desperately tried to veer his own boat out of its path.

After desperate efforts to sail the dinghy out of the path of the tall ship, the man dived into the water to avoid being crushed himself. The RS Aero was hit by the bow of the ship and pushed to one side, while the man appeared to avoid the ship and was not hurt.

The Mare Frisium, which is Dutch flagged, was built in 1916, is 49.5m long and displaces 210 tonnes. She is used as a luxury passenger vessel, taking groups to events such as Kiele Woche and being chartered for weddings and private parties.