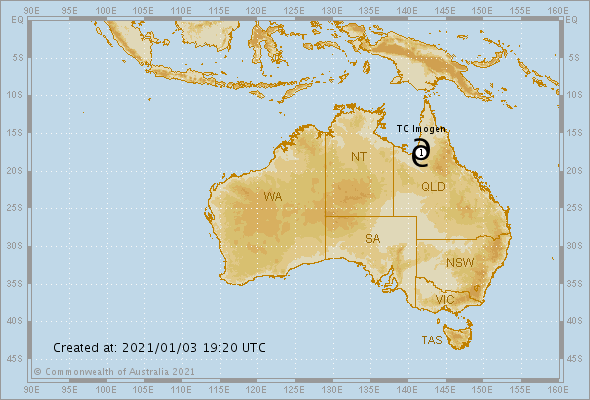 Tropical cyclone Imogen is moving further inland over the eastern Gulf Country. A transition to a tropical low is expected soon, but heavy rainfall and localised damaging winds remain possible.

Burketown to Karumba and Kowanyama to Gilbert River Mouth.

Details of Tropical Cyclone Imogen at 4:00 am AEST:

Location: within 30 kilometres of 17.6 degrees South 141.7 degrees East, estimated to be 65 kilometres east of Normanton and 90 kilometres northwest of Croydon.

Tropical cyclone Imogen crossed the Gulf of Carpentaria coast just to the north of Karumba at about 9pm last evening. Imogen is expected to continue moving east-southeastwards in the short term, taking it further inland today. The system has recently maintained its strength over land, but later this morning is expected to gradually transition to a tropical low. Longer term, the system is expected to track more slowly to the southeast towards the North Tropical and Herbert-Lower Burdekin coasts as a deep tropical low.

GALES with wind gusts to 105 km/h have been recently observed around Normanton on the southwestern flank of the cyclone. Gales are likely to continue to extend out to about 80 kilometres from the centre of the cyclone for the next few hours. Winds should generally ease below gale force during Monday morning as Imogen transitions to a tropical low, but squally thunderstorms with more isolated damaging wind gusts remain possible for the remainder of Monday.

HEAVY RAINFALL that is likely to lead to flash flooding, flooding of low lying areas and riverine flooding is being observed about the southeast Gulf of Carpentaria coast and adjacent inland, and is likely to continue near the cyclone through Monday. Heavy rainfall will spread to inland areas of southern Cape York Peninsula on Monday as the cyclone moves further inland. A separate severe weather warning is current for damaging wind gusts and heavy rainfall further east across the southern Peninsula and North Tropical Coast.

The risk of a significant storm tide along the Gulf coast is no longer expected.

People between Karumba and Gilbert River Mouth and inland to Croydon should remain indoors until the cyclone has passed and listen to the next advice at 8 am.

The next advice will be issued by 8:00 am AEST Monday 04 January.

This warning is also available through TV and Radio Broadcasts; the Bureau's website at www.bom.gov.au or call 1300 659 210. The Bureau and the State Emergency Service would appreciate this warning being broadcast regularly.

A map showing the track of the cyclone is available at: http://www.bom.gov.au/cyclone