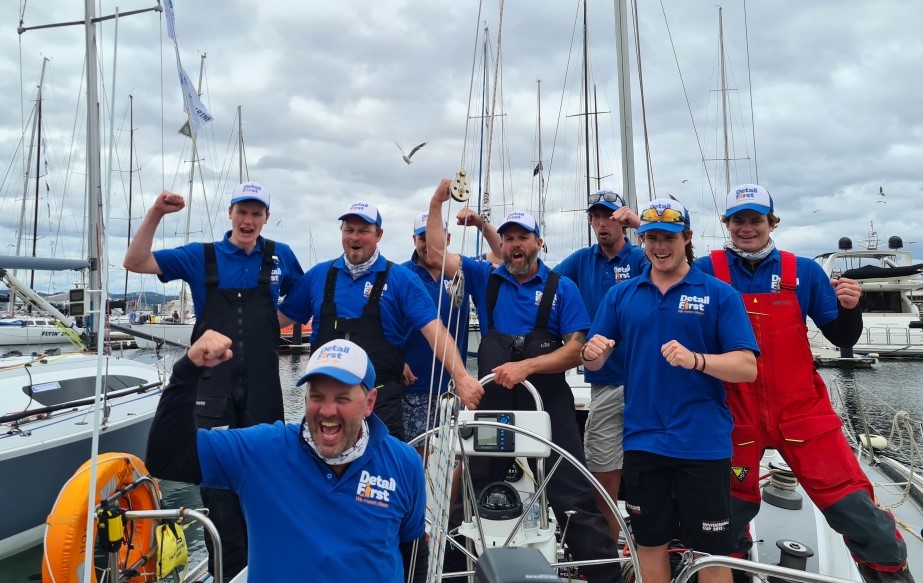 After a tough two days of sailing, the Hobart-based team, Detail First, is the provisional winner of the TasPorts Launceston to Hobart Yacht Race, with an IRC corrected elapsed time of 1 day, 22 hours, 49 minutes and 18 seconds.

While Alive, skippered by Duncan Hine and owned by Philip Turner, won line honours and set a new race record, the Notice of Race for the event determines the overall winner as the winner on IRC handicap overall.

The result for Detail First skipper Scott Broadby, sailing his Farr 1104, is a testament to the team’s hard work and grit on the race track, and to the race itself, in which boats under 40 feet can take the silverware.

“We feel absolutely elated and relieved to be home. It was a hard race, but our tough boat loves the tough conditions. The first night in particular when the gale came through was a challenge and was the first time that I have had two reefs in the main and no other sail up and just hanging on, but then we had some really good kite runs and we were lucky enough to get back before the breeze dropped out which was a big goal of ours,” said Broadby.

To add to this success, the Detail First team is also the provisional overall winner on AMS and performance or PHS handicaps, and Division 2 on IRC, AMS and PHS, while Alive has won on ORCi handicap.

And not many skippers can win an offshore race without leaving home. “A few years ago, my wife and I sold our house, and while we were waiting to buy another house, we lived on Detail First for a year, and we loved it so much, we decided to buy another boat which we now live on,” said Broadby.

“The crew was absolutely brilliant, I can’t speak highly enough of them, some of them felt sick throughout the race but they stepped up and kept doing their thing, including the younger guys onboard,” said Broadby.

Heatwave Brierley MC, a Mumm 36 skippered by Matthew Keal, is in second place on PHS overall followed by Hip-Nautic, skippered by Jean-Pierre Ravanat with Richard Boult, who sailed the new Jeanneau Sunfast 330-7811 two-handed in the challenging race.

When asked the secret to their success, Broadby reflected upon the race. “In the last few years, we’ve been in some good positions in the race, but have been unlucky and have been ‘glassed out’ on the Derwent [River], so our focus was to really push hard and get back before the breeze dropped out. And part of our strategy this year was to put the spinnaker up at night which we hadn’t done that much before. All in all, we worked very hard and that got us the result we were after,” said Broadby.

Final results will be published on Wednesday with presentations to be held at the Derwent Sailing Squadron at 12:30pm on 31 December 2020.