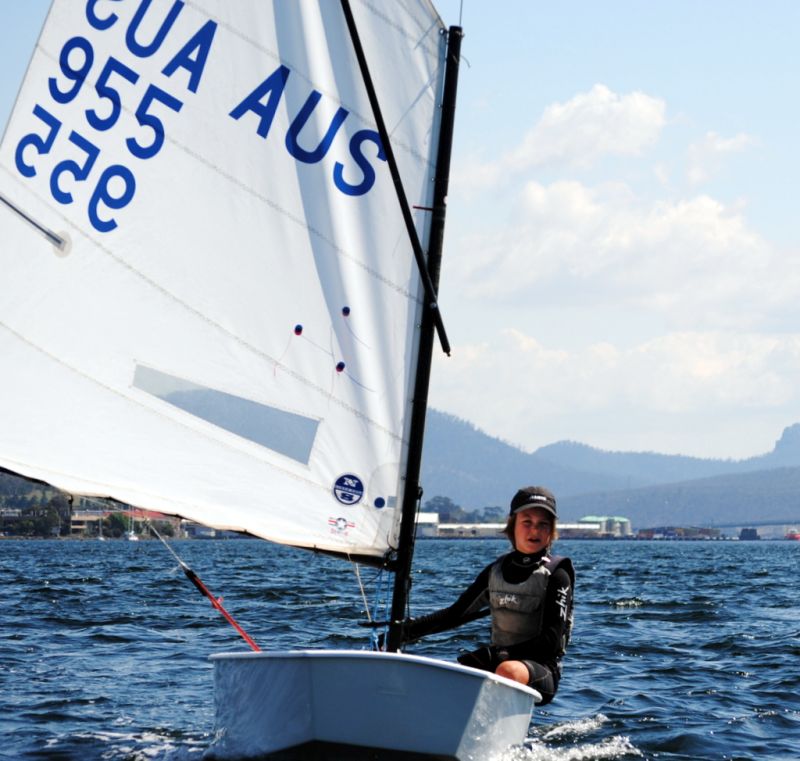 Oscar O’Donoghue has moved from an Optimist to skippering a 29er in the nationals. Photo Peter Campbell.

The single-handed Optimists, along with double-handed crews in 29ers, 49ers, 49erFXs skiffs, 420 dinghies and Nacra 15 catamarans have attracted junior and youth sailors from throughout Australia and Pacific nations.

It’s been a good day for Tasmanian sailors in the Optimists as well as in the 29ers and 49erFX classes.
Sandy Bay Sailing Club member Eddie Reid had a great start to the Optimists, provisionally winning race three after earlier race placings of 10th and 5th in his 70-boat Open group. Another SBSC member, Adelaide O’Donoghue was provisionally top placed Australian girl in the Open division.

In the 29er skiff fleet of 48 boats, Sandy Bay Sailing Club sailors William Wallis and Finn Sprott scored two more wins to extend their overall pointscore lead with a net 8 points after 10 races. A second Tasmanian crew, Oscar O’Donoghue and Rupert Hamilton, moved up to third overall on 30 points after 10 races with the NSW crew of Archie Cropley and Paul in second place on 23 points.

Tasmanian women Jasmin Galbraith and Chloe Fisher scored their first win in the 49erFX class and are third overall in standings.

John Cooley and Simon Murnaghan (NSW)head the 49erFX class with eight wins in ten races while in the 49er male class Victorians Sam Phllips and Will Phillips have won all ten races sailed so far.

Australian champion Will Cooley and his new crew, Bec Hancock, from Sydney notched up three straight wins in the Nacra 15 catamarans today to give them a clear overall lead after seven races.

In the 420 class, series leaders Ryan Littlechild and Jack Ferguson (NSW) won their second race of the regatta today but are only five point clear of New Zealanders Seb Menzies and Blake McGlashan.