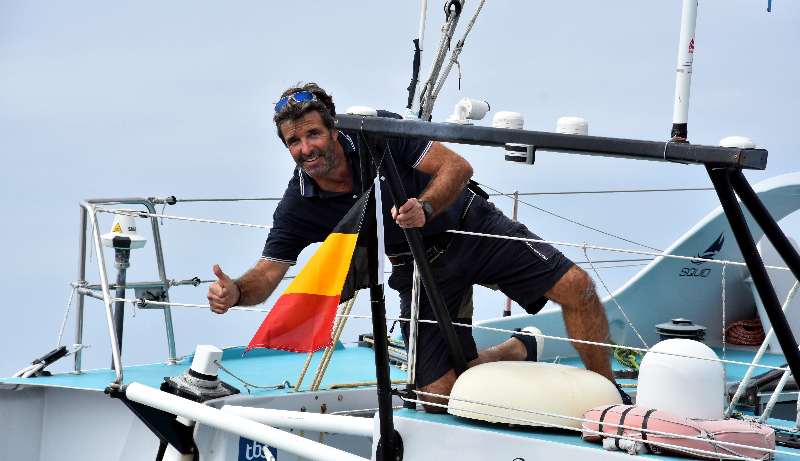 The new owner of Nandor Fa’s IMOCA, the Belgian skipper, Denis Van Weynbergh hopes to be able to compete in the Globe Series and reach a climax by taking part in the 2020 Vendée Globe. While for a long time, he has divided up his life between being head of a company and ocean racing, he is now dedicating all his time to his IMOCA project with the aim of becoming the first Belgian sailor to complete the Vendée Globe. He recently launched a highly original, artistic crowd-funding campaign. We met up with him to find out more.

Denis, when did you first feel that you wanted to take part in the Vendée Globe?
“It suddenly came to me in 2001, when I was preparing for the Mini Transat. During a delivery trip, I moored up in Bénodet alongside Michel Desjoyeaux’s PRB, which had just won the Vendée Globe. My Pogo 6.50 looked a bit like that IMOCA, but on a much smaller scale of course. That’s when I started to imagine competing in the Vendée Globe. At the same time, it seemed to me to be a crazy idea and beyond my reach. Before thinking seriously about it, I needed to complete my first solo offshore race, the Mini Transat. I managed to do that. That race was a milestone for me and the Vendée Globe remained in the back of my mind. I then continued to gain experience on various types of boat, in particular on Class40s. I completed the Route du Rhum in 2010, the Quebec Saint-Malo in 2012, the Transat Jacques Vabre in 2013, the Fastnet Race in 2015…”

What really led you to move to the IMOCA class?
“In Belgium, ocean racing is not as popular as in France. We only have 40 miles of coast and no real sailing culture. I tried to find some help in the market in Belgium for the 2016 Vendée Globe, but firms were not that keen. In fact, I understood that I needed to find a strong concept, an original idea, something creative. Last year, I met the photographer, Edouard Janssens, who has specialised in the creation of works of art based on photos of the iris, the coloured part of the eye. One thing led to another and the project, ‘Eye Sea’ was born? The aim is to offer partners the opportunity to acquire one of the 250 personalised iris photos that will form one single giant iris on the sails of my IMOCA. We’ll therefore be creating a work of art while working together in this crowd-funding project. A work of art that will go all the way around the world.”

Once you had defined the concept and set up the crowd-funding campaign, you had to find an IMOCA that was available. Why did you choose Nandor Fa’s former Spirit of Hungary?
“In late 2017, I was strolling around Les Sables d’Olonne on the Vendée Globe pontoon and I noticed that boat. From the outset, she seemed to me to be simple, solid and reliable. Exactly what I was looking for in my project, she suits my personality and my goals. I wanted a boat that had already completed the Vendée Globe without any major problems and that was the case for Nandor Fa’s boat, which finished in an honourable eighth place in the last race. I quickly got in contact with the boat captain, then Nandor. The deal was signed last June.”

Did your first sailing trips on her live up to your expectations?
“Yes. I had never sailed an IMOCA, but I knew everything was huge on these boats. That was confirmed during the first trips I was able to carry out. Everything is faster and is more physical on an IMOCA. You can’t carry out the slightest manoeuvre without planning ahead. You have to be methodical. Nandor Fa really thought about this boat with details that simplify life aboard her.”

For a long time, you managed to reconcile your professional life and ocean racing. Was that too complicated when dealing with a project as big as an IMOCA?
“Exactly. Preparing for the Vendée Globe is a full time job, when you look for the funding and do all the preparation on land and out at sea… particularly as for the moment, I’m taking care of the project alone. To dedicate myself entirely to the IMOCA project, I sold my delivery business PN Express World, in November 2017.”

What is your programme for the months ahead? Do you intend to compete in all of the races in the IMOCA Globe Series?
“Yes. The boat will be going into the yard in early November and is due to be realunched in late January. In 2019 and 2020, I want to clock up as many miles of racing as I can. I can’t see myself taking part in the Vendée Globe and sailing in the Roaring Forties without having sailed fifteen to twenty thousand miles on my IMOCA. On the other hand, I won’t be competing in the Route du Rhum this year. My job for the moment is to find sponsors.”

So where are you in terms of the funding?
“My first partner has entered the adventure, the Belgian company, Pranarôm (which specialises in essential oils). They have brought around 15% of the total budget that I estimate to be 2.5 million euros. The goal now is to start to sell the iris photos to individuals and companies. Ideally, I should have a headline partner, who would give their name to the boat, associating it with the name of the concept: ‘Eye-Sea… X or Y’.”

You can find out more about Denis Van Weynbergh’s project here: