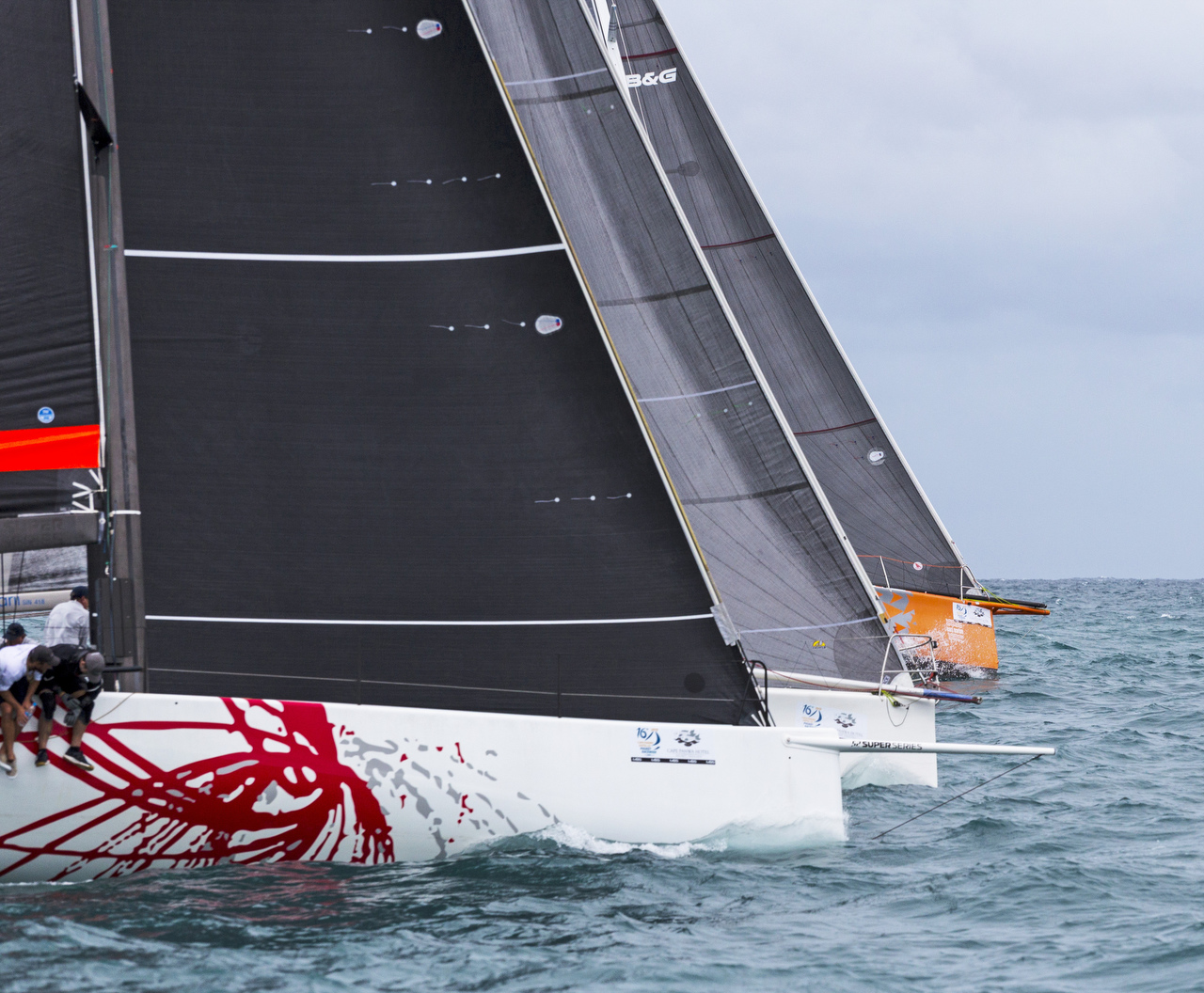 Phuket, Thailand: Anticipation was high this morning as dark clouds started to lift and the sky began to clear, but sadly it didn't last too long, as the rain soon returned forcing an AP onshore while the Race Management team went out to look at their options.

The oscillating winds and near two-metre swells, where the wind direction was different to the track of the storm cells – due to the Lunar Eclipse, some said – made today a challenge for all. Wave surfing and near broaches kept competitors on their toes while Race Management worked hard to set a race for all and officially got the 2019 Cape Panwa Hotel Phuket Raceweek underway.

The Discover Sailing in Asia no-show in IRC Zero means the organisers will score IRC Zero and IRC I for one result, and score IRC I separately for a second result. That will start tomorrow, however, meaning for today Ray Roberts and his crew on Team Hollywood were the unchallenged winners in IRC Zero.

The Russian crew on Megazip got the better of all-comers in IRC I; second across the line, first on corrected time and their first bullet on the board. Despite crossing first, East Marine Emagine (AUS) had to settle for second today ahead of last year's winner, AquarII (AUS) in third.

Note: when factoring in Team Hollywood's corrected time today, they would've been fourth in the combined IRC Zero/ IRC I class. No doubt Ray and team will be hoping for some longer courses tomorrow to help unwind their handicap.

The ever-green Phoenix (DEN) got their defense off to the best possible start with a win in today's race in IRC II – they lead from early on to cross the line first and claim the win on corrected time. The Dragon, a 25-foot Platu, got the better of Sydney Premier Karting Park, another 25-foot Platu, to finish second and third respectively.

Cruising Monohull class is the largest class at this year's regatta with 10 entries, and it was late-entry Phalin (AUS), skippered by Ian Loderwyckx, which romped away with the win today. Lady Bubbly (AUS) and Venture (AUS) sailed hard but had to settle for second and third on the day.

With seven starters in Multihull Racing, just four managed to finish the race and a number mastered their swell-surfing skills.

Winner of the recent Multihull Solutions Regatta, Phantom V (AUS), skippered by designer Alan Carwardine, made the best of the conditions crossing the line second and correcting out for the win. The new Fugazi (AUS), skippered by Dan Fidock claimed second ahead of Bonza (GBR), the old Fugazi, skippered by Warwick Downes, in third.

Looking to defend their Firefly 850 title, Twin Sharks (GBR) won today's race and put their first bullet on the board. Arch rival Voodoo (GER), however, weren't far behind and will be looking to make Twin Sharks' life difficult over the final two days of the regatta. Mono Inzi (FRA), under the new ownership of Marc Chapus, slotted into third.