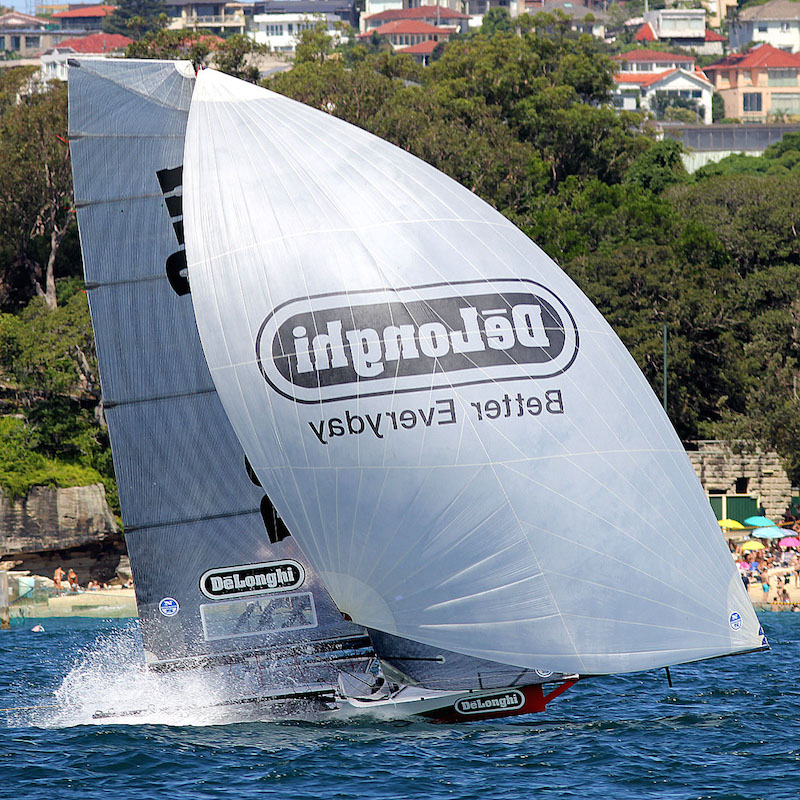 A near faultless performance by the De’Longhi 18ft Skiff crew in the 12-15knot North East wind gave the team a narrow win in the 3-Buoys Yandoo Trophy race on Sydney Harbour today.

Simon Nearn, Grant Rollerson and Kieran Cowan started at the boat end of the line and were quickly in a strong leading position and lost the lead only temporarily before scoring their first win of the season. De’Longhi took the honours by 23secs from Stephen Quigley, Thomas Quigley and Sam Ellis on Alcatel One Touch.

With the breeze hovering on the brink of the range between the #1 and #2 rigs, the selection was evenly spread between the fleet. When the breeze favoured the East it didn’t freshen at any time and the boats with the bigger #1`rig had made the right choice.

De’Longhi and Alcatel One Touch were the first two teams to benefit from the Easterly slant just after the start and were ahead of Smeg (Adam Beashel) and Yandoo (John Winning) as the fleet began their work to the first set of windward marks.

Despite sailing against the tide the lifts were all on the right hand side of the course and the fleet were spread completely across the harbour as each team searched for the best breeze.

De’Longhi gained a comfortable lead after rounding the windward mark but the race behind the leader was intense with nine or ten skiffs separated by just a few secs.

At the end of the first lap of the course, De’Longhi was ahead of Smeg and Compassmarkets.com (Keagan York) with Mojo Wine and Alcatel One Touch close behind.

De’Longhi continued to maintain the lead on the following windward leg but Mojo Wine began to put pressure on the leader with opposing tactics down the second spinnaker run.

As the fleet headed back for the final triangular lap, the De’Longhi team had a race on its hands as the rookie Mojo Wine team began to put even more pressure on their more experienced rivals.

The handicapping system was well in play as the three leading teams approached the final set of windward buoys.

Alcatel One Touch led to the wing mark off Rose Bay but couldn’t hold off the final dash by De’Longhi which went on to win a really entertaining race in front of a good spectator fleet.

Next Sunday’s club race will be for the Syd. Barnett Memorial Trophy, and is the final race before Christmas..  The Australian 18 Footers League will have a Spectator Ferry, leaving Double Bay Wharf, alongside the clubhouse, at 2.00pm, to follow all the action.