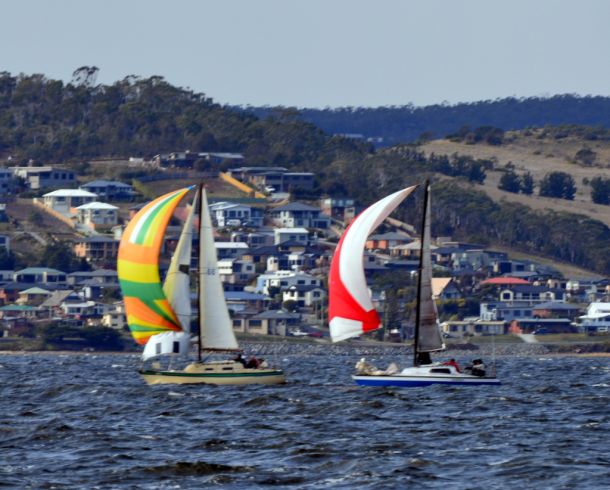 The seasons are more clearly defined in Tasmania than any other state in Australia, and with two days to go to the official start of spring, there was no question that it was still winter in Hobart for today’s final race of the Bellerive Yacht Club/Tilford Auto Group’s Winter Series 2015.

Mount Wellington’s peak was packed with snow (when visible through the snow clouds) and down on the River Derwent a fleet of 22 yachts and their crews braved a 10-12 knot breeze that cut the wind chill factor to half the official Hobart temperature reading of between 7 and 9 degrees this morning.

However, crews warmed up once the racing began, with boat-for-boat battles resulting in just seconds on corrected time separating the top placegetters in all three divisions and, when calculations were completed, less than a handful of points deciding the Series winners.

Racing began in chilly and misty conditions with an unusual (for a Winter Series race) SSW breeze sweeping up the river from the direction of the Antarctic. The odd gust reached 15 knots, gently oscillating around the SSW-S direction.

“The sun appeared about halfway through the race and helped to warm frozen feet and hands,” commented BYC sailing manager Peter Watson. “However, there was excellent and close racing among the 22 starters in the three divisions, especially between Tas Paints and Ciao Baby II.”

At the finish of Division 1, Ian Stewart’s Mumm 36 TasPaints, helmed by the boat’s sponsor Simon Desmarchelier, proprietor of Tas Paints, got the gun by 56 seconds. On corrected time, the order was reversed.

In Division 3, Ragtime (Tom Kirkland) and Quebrada (Tim Maddock) match raced around the course, duelling for a Series win, only to let Y-Nacht (P Wilkinson & G Frame) slip through to get the gun and a vital second on corrected time.

Quebrada won the final race by 20 seconds on corrected time from N-Yacht, with Ragtime third, and this gave Quebrada the Winter Series by just one point from N-Yacht, which took second overall on a countback from Ragtime.

Bellerive Yacht Club was more fortunate with the winter weather than the Derwent Sailing Squadron and the Royal Yacht Club of Tasmania which each lost one race day due to galeforce winds on the river.

DSS finished its Winter Series last Sunday and the RYCT’s final race is scheduled for next Sunday, September 6. The Combined Clubs Opening Day will be on Saturday, October 10 with the first event in the Long Race Series, the Channel Race, the following day.