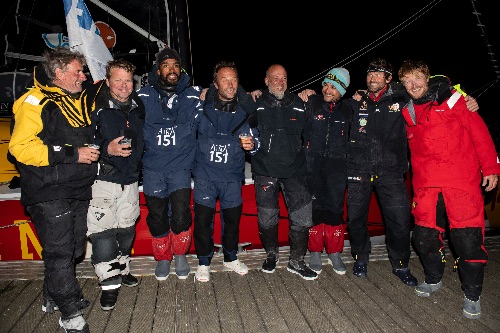 Crews celebrate the finish of the Defi Atlantique.

Following his night time arrival in La Rochelle in second place of the second stage between Horta and La Rochelle, Aymeric Chappellier wins the Défi Atlantique on the basis of the combined race time for the two legs from Pointe-à-Pitre.

Second in the Route du Rhum last November, this time Aymeric sports the winning colours in this original event that was so dear to him. The order established after the first leg was not altered enough by the second leg to modify the final list of winners. Anna Enfance et Avenir took the winning place ahead of Earendil and Made in Midi.

What they said on arrival:

“It’s true that I wanted this victory! Our opponents were tough and didn’t give in. We finished very close to them. This race has been very tiring. The loss of our big spinnaker which exploded in a forward dip on the second day required a great deal of work. We spent hours repairing it, once, twice, thrice. We took turns at the helm and doing the repairs, at the cost of sleep. We had to work flat out to keep up. We finished very near Earendil which was very well sailed. This is a great race format. It’s good to do a transatlantic from west to east, which opens up the game and which is very interesting strategically. And it’s much better to return by the sea than by cargo ship, right? Yes, I’m very happy to be returning with this victory and to be coming home… “

Antoine Carpentier (Earendil) – Second in the first leg, winner of the second leg, 2nd in the overall ranking.
“We were last out of Faial in the Azores, after a poor choice along the coast. We worked flat out to return to the race. We were very close to the front and we were afraid that, as for the first leg, things would get away from us. In fact, in this race, everyone came from behind, and we were under pressure all the time. There were some incredible days, one of which was not far off the 24-hour distance record (editor’s note 368 miles). We consistently made good time and we didn’t make any mistakes.
I discovered Pietro (Luciani), who impressed me because he has only been in this profession for a few years. As ever, Edouard Marie fought incredibly hard. We are really pleased to have won this second leg. We really wanted it!”

Pietro Luciani (Earendil) – Second in the first leg, winner of the second leg, 2nd in the overall ranking.
“It’s a wonderful victory. I’m very happy. Happy with our race, happy with how we worked together. The first 24 hours were crucial and we worked hard to be in the right place. Everyone aboard was in phase. We all agreed about the decisions to take, in particular in terms of the choice of sail. On a personal level, it’s very satisfying and I’m very happy that Aymeric won overall. He’s an accomplished sailor whom I greatly respect! “

Kito de Pavant (Made in Midi) – Third in the first leg, third in the second leg, 3rd in the overall ranking.
“ A second leg that was quick at the start and then closed in the Gulf of Gascony. A little bit of a habit in this Défi Atlantique in which we always finished close… It was great doing battle with the five boats in front and especially with Aïna which we found to be quite fast. We did the entire race together. It was ahead and then suddenly it was us. We had a serious connection problem, which meant that we didn't have any weather forecast, or ranking for three days… it was difficult to keep up, we didn’t know where we had to go. But we are happy at having kept this 3rd place. It was the objective we set ourselves when departing from Horta, and we did it… because there was pressure from behind! And, we had fun together with Alex.”