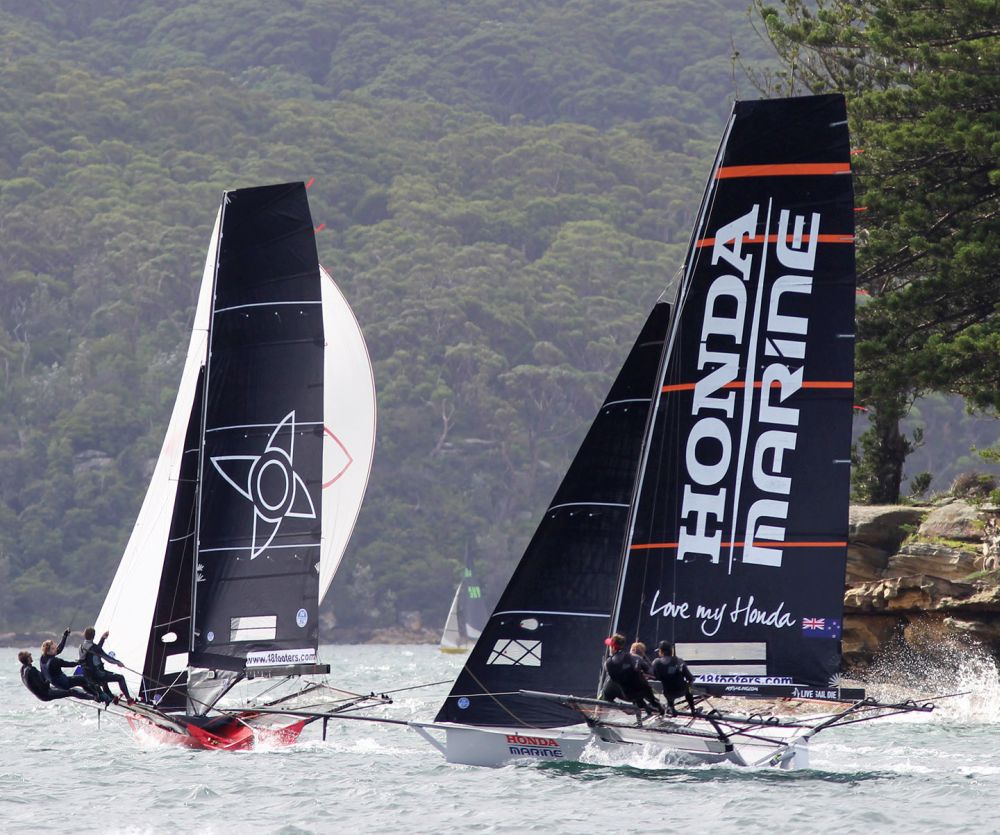 Honda Marine about to grab the lead from Noakesailing.

The Honda Marine team of David McDiarmid, Matt Steven and Brad Collins tightened their grip slightly on the 2020 JJ Giltinan 18ft Skiff Championship when they scored their second win of the regatta in Race 2 on Sydney Harbour today.

Once again, the defending champion team came from behind in the SSW wind before racing away to win by 1m46s.

The race for second place behind Honda Marine was close over the last two legs of the course and became a thriller in the closing stages as Winning Group (Seve Jarvin, Sam Newton, Scott Babbage) desperately hung on to cross the finish line a mere 5s ahead of Yandoo (John Winning, Mike Kennedy and Fang Warren).

Smeg (Micah Lane) once again came back from a slow start to finish fourth, ahead of The Oak Double Bay-4 Pines (Aron Everett) and the early leader Noakesailing (Sean Langman).

Today's race was sailed in a SSW wind between 15-22-knots over the long South course which always produces a spectacular spinnaker run and a lot of hard work for the crews.

As was the situation in Race 1, Sean Langman's Noakesailing led the fleet at the windward mark then sailed a great downwind leg to Obelisk the establish a clear break over Winning Group and Honda Marine, with The Kitchen Maker-Caesarstone (Jordan Girdis) and Vintec (Kirk Mitchell) close behind.

On the following leg back to the Totem Pole at the south end of Shark Island, Noakes continued to retain her lead but the defending champion Honda Marine was beginning to make her move and started to put pressure on Noakesailing as the pair approached the rounding mark.

Langman and his team elected to go for a spinnaker to try and hold off the charging Honda Marine but it was a move fraught with danger and ultimately cost them the lead.

The two leaders had moved ahead of Winning Group and Yandoo, and a group of boats including Smeg, Tech2, Vintec and Queenslander, skippered by Australian International 14 class champion David Hayter.

Tech2 had also began to improve her position and was in fifth place as the fleet approached the Athol Bay mark, but a capsize on the spinnaker drop ruined their chances and the Australian champion dropped back to finish ninth.

Honda's lead was 40s at the Clark Island windward mark on the second lap of the course and the team elected to gybe early while the chasing Winning Group continued on a starboard gybe.

Honda Marine had to drop their spinnaker as to clear Bradleys Head and Winning Group got to within a few boat lengths of the leader as the pair raced downwind towards Obelisk.

As hard as they tried, the Winning Group team couldn't match the downwind speed of Honda Marine and gradually fell back into the clutches of Yandoo, before hanging on to narrowly take second place.

Races 3 and 4 of the championship will be sailed on Tuesday, March 17).

Other race dates are:

Spectators can see all the teams while they are rigging, then follow the racing on board the club's spectator ferry, which leaves Double Bay Wharf, alongside the rigging area, at 2pm. Book online through the club's website www.18footers.com

AeroMedia Live Broadcast team will be out on Sydney Harbour to capture all the action.  For those who can't make it onto the water, live streaming is available at www.18footers.com and clicking on the '18 Footers TV' link.

A pdf copy of the 32-page 2020 JJ Giltinan Championship programme is available at: https://www.18footers.com.au/18-footers-sailing/documents/. Click on “2020 JJ GILTINAN PROGRAMME” button