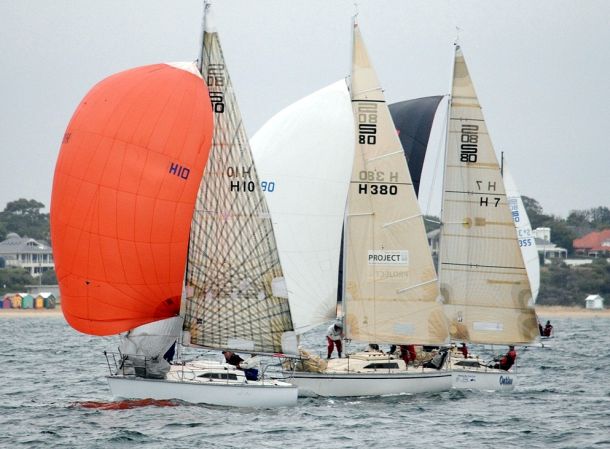 Defending champion skipper Luke Reinehr today sailed Intrusion to two straight wins on the opening day of the S80 keelboat championship on Port Phillip, opening up a commanding early lead in the seven race series over the weekend.

Victoria’s largest one-design keelboat class championship has attracted a bumper fleet of 20 S80s, including one crew from Western Australia and two female crews, but it was Intrusion from Sandringham Yacht Club that dominated the opening day’s racing.

Royal Brighton Yacht Club set a short windward/leeward course for the midday start of race one, following this with a challenging 13 nautical mile long race in a consistent 12 knot SSE breeze. By the time the S80s started, the morning rain had ended.

Although not winning the starts, Reinehr, representing Sandringham Yacht Club, steadily worked his way to the front of the fleet with good tactics and crew work, winning both races by a good margin to give Intrusion a 2 point score, 3 points clear of second placed Escape, skippered by Tony Beck from the Royal Yacht Club of Victoria.

Escape today had a consistent 3-2 result to be on 5 points while third place overall is shared by Skipjack (Bill Feore) from Hobson’s Bay Yacht Club and the Sandingham Yacht Club boat Imaginer (Chris Byrne). Both are on 9 points, Skipjack today placing 5-4 and Imaginer 6-3.

The WA entrant, Rock and Roll, skippered by Tony Strickland from Royal Freshwater Bay Yacht Club, placed 13th in race one today but improved to be ninth across the line in race two.