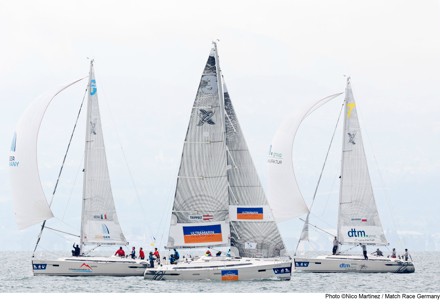 The 21st Match Race Germany has started. To kick-off Germany’s best known matchracing classic, Race Officer Rudi Magg and his team from Yacht Club Langenargen got through with the first 12 of 66 duels producing a full Round Robin with all the twelve teams from nine nations, each racing each other team once in this preliminary round.

In contrast to his co-favourite status, it’s been former America’s Cup semi-finalist und twelve times Ice Sailing World Champion Karol Jablonski who struggled to get his boat up to pace on day 1. Jablonski Racing Team lost all three matches of the day and will have to turn the black series around on day 2 to save their chances to proceed to the next round.

Jablonski received his first loss in the duel with Austrian Max Trippolt who, ahead of the encounter, had answered the question how he would react to Jablonski’s typically brisk style of matchracing, in just eight words: “We will probably have to simply sail faster.” And that’s exactly what the Austrians did.

The only German crew at Match Race Germany, Max Gurgel and his Team Vmax Yachting based in Hamburg, won their opening race in style, defeating Patryk Zboja’s Polish Team Bakista. Said Gurgel, who placed third in his first Match Race Germany last year: “We have simply been faster over the course.“

Also Defending Champion Eric Monnin and his Albert Riele Swiss Team prevailed in their match against newcomer Afonso Leite from Portugal. After his only duel of the day, Monnin reported self-critically: “We’ve been a bit late at the start and our opponent had the better side of the course. But we managed to come back with better speed and finally won the race by half a leg’s distance. Experience is key on these big boats in such light winds.”

The Round Robin will be continued on Friday. Match Race Germany ends on Monday (Pentecost) with the finals and the big award ceremony in Langenargen’s pictoresque Gondola Harbour where the organizers expect up to more than 30,000 spectators over the long holiday weekend. It’s going to be full house, including an attractice infotainment program. It’s going to be a charming family affair with many different disciplines of watersports to be tested and fell in love with. Popular music bands will play in the famous Bavarian Hut where fans and sailors meet for a series of cheerful parties. More than 30,000 people are expected to visit Germany’s number one Match Race.