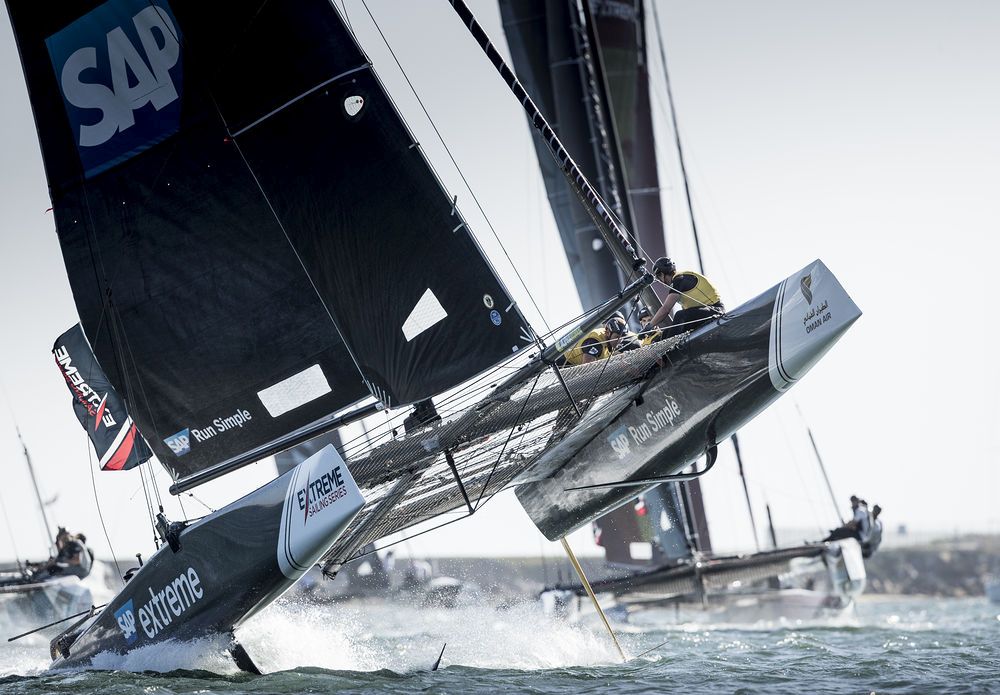 With seven races in big breeze, helm Adam Minoprio and the rest of the crew on board the Danish-flagged syndicate delivered a masterclass, taking home four wins and two seconds.

“As a team, we excel in the heavy air. We showed everyone up today with how these boats should be sailed, we had clean manoeuvres and were faster on the track. When you do a foiling gybe with the code zero sail up downwind it's a ten boat-length gain, and we managed to nail a few of them today,” said Minoprio.

“It's huge for us to be gaining points on Alinghi and Oman Air in this event. We've got five days of the Extreme Sailing Series left, one more here in San Diego, and we must make sure that we push hard tomorrow to extend the overall championship lead,” added the Kiwi, whose team currently tops the season leader board.

A mixed bag for the Swiss, which included only one win and two more podiums, left them with their work cut out for the final day tomorrow.

“It was an interesting day. It wasn't our best and we have quite a lot to work on for tomorrow, but the win is still on the table and we are looking forward to going out there and catching up on some points,” said co-skipper and helm Arnaud Psarofaghis.

Land Rover BAR Academy – helmed by Sir Ben Ainslie – finished in fifth, followed by NZ Extreme Sailing Team in sixth. Although chances of a podium finish look slim for the Kiwi squad, helm Josh Junior celebrated a personal victory today with his first win since taking over the helm in Act 6, Cardiff.

“It was awesome to win our first race of the Act. I think as a team we've been getting better every day and it feels like we've been a little bit unlucky not getting a win until now, but we finally got one and everyone is happy. It's a great way to finish the day,” commented Junior, a former cyclor for Emirates Team New Zealand in the 35th America's Cup.

Team Extreme San Diego showed moments of promise throughout the day but only managed two podiums and finished seventh, leaving Lupe Tortilla Demetrio to round off the table in eighth. For both US-flagged wildcards this week is their first sailing together as a crew, and for many of the sailors their first time on the GC32 boat.