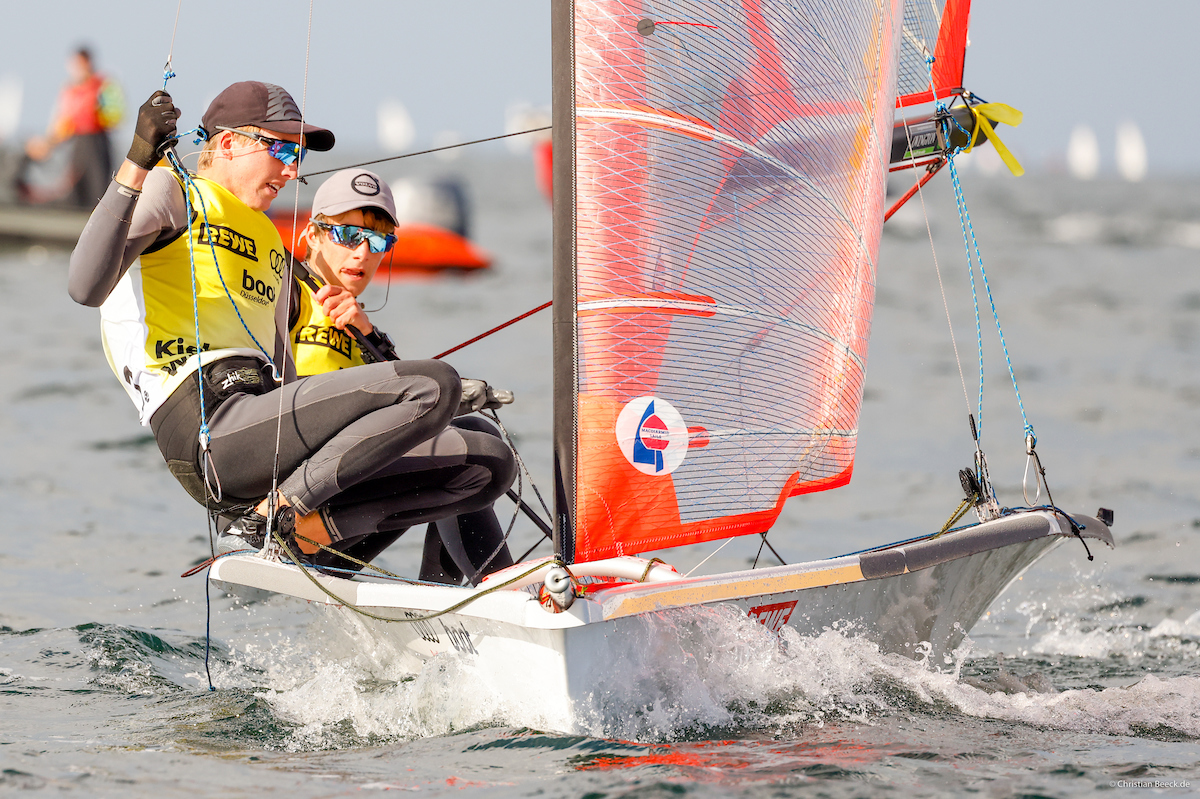 WWW in Schilksee – Waiting for wind and weather was the name of the game on the third day of the Kiel Week regatta for the crews in the ten international classes and for the offshore yachts: Thunderstorm cells around the Kiel Fjord made the racing day a game of patience. While the offshore yachts were sent out early to their Kiel Cup races and waited on the Kiel Bay in heavy rain showers for a suitable breeze, the sailors in the dinghy classes could prepare intensively in the Olympic harbour in the interplay of sun and rain for the departure signal. Weather expert Dr. Meeno Schrader saw a chance of a sailable weather window for the late afternoon and was right. At least the 29ers, ILCA 6 and Waszps went out on the water again. And the offshore sailors even managed the complete scheduled program with a short up-and-down race and a coastal race round the cans.

The favourites provided the highlights in the late light of the day. In the 29ers, the New Zealanders George Lee Rush/Sebastian Menzies remain sovereign at the top. In the ILCA 6, defending Kieler Woche champion Ole Schweckendiek from Kiel defended the lead he had taken on the previous day on his home turf. And as the fastest Foiler by far; Paul Farien (also from Kiel, Germany) let his Waszp fly over the course.

Waiting time means time for mental work and boat maintenance. So the waiting sailors took the chance to polish the hulls, check the rigging and make minor repairs. Due to the light to moderate winds on the first three days of Kiel Week so far, there was no intensive work to be done, it was said from the tent of Kiel Week service partner North Sails. But for postponed repairs on sails and harness pants as well as freshly glued sail numbers, some crews had strolled to the North Pagoda.
Otherwise, there was plenty of time for small talk on the mooring areas. “We are deeply relaxed, sitting by our boats and having a good time. If it goes, it goes. If not, we don’t,” said Folkeboat helmsman Ulf Kipcke from Kiel, Germany, enjoying his time with Gold Cup competitors. The Folkeboat fleet finally did not start. Their way to the Foxtrot course would have been too long to take advantage of the short time of good wind.
The 2.4 metre were even able to finish their wait early. With the inclusion class sharing their sailing area with the Waszp, it was clear that there was no time margin left for them to race this Monday. This is because the Waszp had to be given priority, they are already behind schedule after Sunday with no races anyway. So the foiling skiffs ran out shortly after 5 pm together with the ILCA 6 and the 29ers. The races in all other classes were cancelled for Monday.