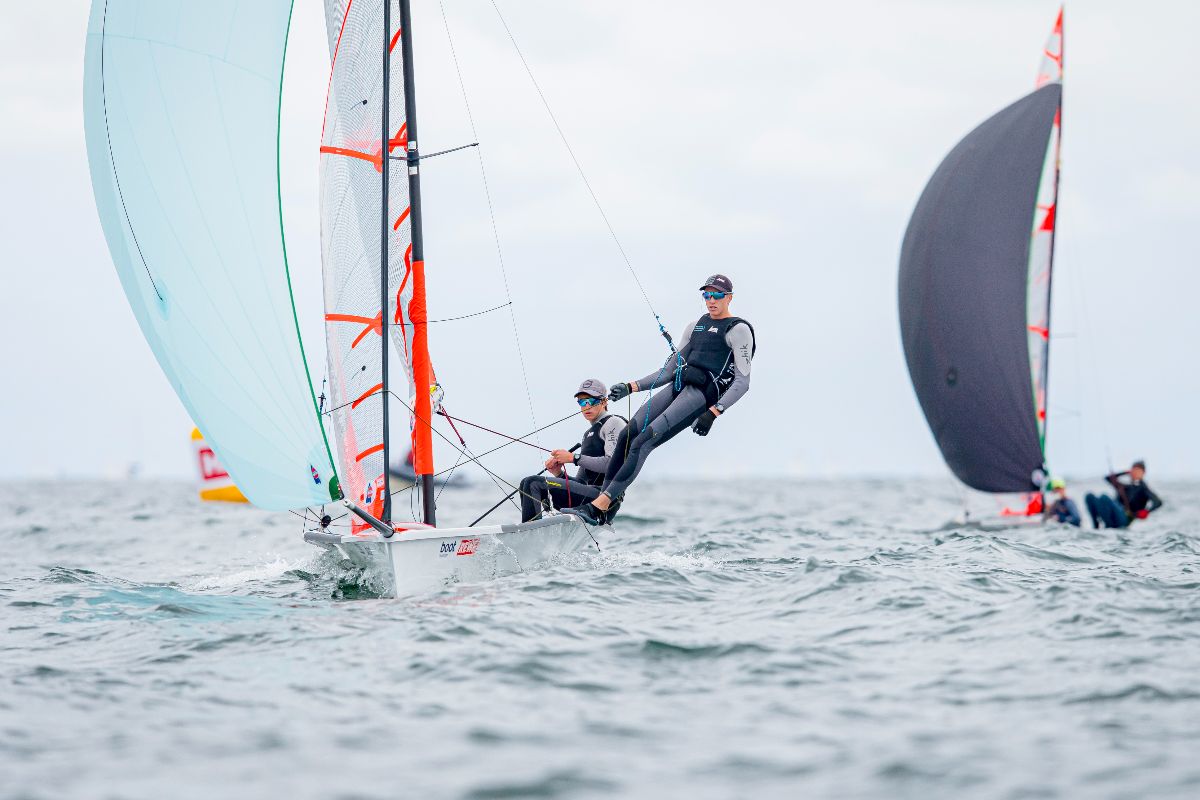 Strongly shifting, northerly light winds made the second day of racing at Kiel Week on Sunday (June 19) a tactical challenge for all sailors. Some sailed steeply downhill in the overall ranking after the dream day before, others climbed to the intermediate podium. George Lee Rush and Sebastian Menzies from New Zealand remain the top of the list in the 29er class. The Kiwis continue to dominate the Euro Cup, which is open to all continents. Carl Krause and Max Georgi from Rostock are second, tied on points with Keo Devaux/Enaël Rio from France. Firmly in Danish hands: the Gold Cup of the Nordic Folkboats. Søren Kæstel and his crew Erik Andersen and Alex Lindegaard are in the lead at half-time ahead of four compatriots. Unchallenged acts the Ammersbek 2.4mR crack Heiko Kröger.

After the champagne sailing the day before, the principle race officer Fabian Bach had a challenge to master. He was right to send nine out of ten international classes on the courses in the morning. Because little by little there were challenging but fair races everywhere. “In the 29ers, we dispensed with the fourth planned because the breeze was getting weaker and weaker”, said Bach, “three other classes had to make do with two out of three.”

The traditional folkboat class only schedules two races per day with long upwinds anyway and remains on stand with four out of eight in total. Local hero Ulf Kipcke used his knowledge of the area to win the day, but with his father Dieter and Gero Martens on board he is only sixth as the best German. Only Danes are ahead of them. Carl-Otto Hedegaard is second ahead of John Wulff. Cup defender Per Jørgensen fell far behind due to an early start disqualification instead of the day’s victory.

Before the qualification for the gold fleet of the best 29ers, the four groups were reshuffled. This did not affect the victory of the two New Zealanders. Apart from a point penalty, they were always first at the finish. “We’ve been in Europe for several months, and we’re also sailing the European Championships and the Youth Worlds,” says the helmsman. The duo has only been on board together for half a year. His crew still puts the performance into perspective: “So far it was ‘only’ success in the preliminary round.” Last year’s winners Johann and Anton Sach from Zarnekau in Ostholstein are in sixth place.

In the gender-open ILCA-6 class, New Zealander Caleb Armit took the lead on equal points with three daily victories from Romanian Ebru Bolat, who did not compete in the last daily race. Kiel’s Ole Schweckendiek is only two points back in third despite an early start disqualification. With two day wins, Germany’s Andre Budzien extended his lead in the OK dinghies ahead of Bo Petersen of Denmark and New Zealand’s Greg Wilcox.

Just ahead is Norway’s Gudleik Berg Kjøpsnes in the ILCA 4 classification, while his Scandinavian colleagues Casper Fink and Simon Christoffersen (both Denmark) lead the Europe standings ahead of Sweden’s Sebastian Knaack. The strong Danish performance in Kiel is underpinned by Jesper Armbrust and Søren Dulong Andreasen at the top of the Contender. Equal on points bow to bow the Hungarians Szabolcs Majthényi/András Domoskos go into the half-time break of the Flying Dutchman with the local Kay-Uwe Lüdtke and Kai Schäfers, who afforded themselves an early start disqualification.

“Everything on course, but I have been cold out there,” reported Heiko Kroeger after returning from track golf, where the 2.4mR Paralympic champion from Sydney (2000) added two day wins to his winning streak. “Only at the first race of the day two slipped through my fingers just before the finish when the wind almost fell asleep in between,” said Kröger, who is aiming to win Kiel Week for the 13th time.

Only the foiling Waszp class waited in vain for enough wind to fly on Sunday. The return race of the offshore yachts from Eckernförde to Kiel was already terminated halfway in order to do justice and fair results. Also for Monday, the forecast from Kiel meteorologist Dr. Meeno Schrader is “exciting, with holes and spins, but in between probably sailable.”