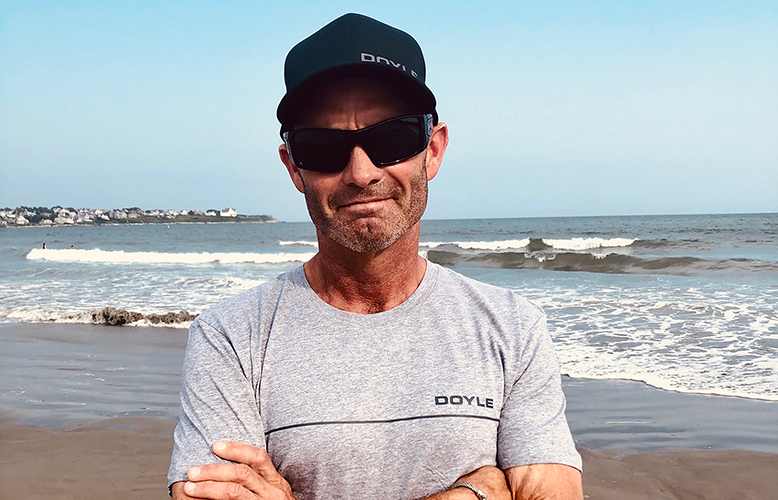 Doyle Sails is pleased to welcome David Armitage as the newest member of the Doyle Sails Design team, bringing added one design and performance racing expertise to the team.

Hailing from the ‘City of Sails’ in Auckland, New Zealand, David’s impressive career has seen him sail at all levels of the sport including Optimist, P-Class, Lasers and ultimately keel boats and match racing. David has competed at the international level in the Laser Masters class, as well as winning the America’s Cup in 1995 with Team New Zealand. In 1999-2000 David served as the sail coordinator and mainsheet trimmer for the America’s Cup team “America True” for the Louis Vuitton Cup in Auckland.

After moving to the USA in 1996, David joined Halsey-Lidgard Sailmakers in Connecticut where he designed sails for a range of projects from dinghies to America’s Cup and Volvo Ocean Race boats. In 2001 he then joined up with Quantum Sails Design Group where he worked as a sail designer and trimmer for several successful one design campaigns such as Farr 30’s, Melges 32’s, Farr 40’s and TP52’s.

David was inspired to join Doyle Sails after being consistently impressed with the company’s developments in sail technology,

“I was drawn to Doyle Sails after watching how innovative the design team has been over the last few years,” he explains. “I’ve witnessed first-hand the quality of their lamination and structures and coupled with their exceptional finish work and attention to detail – they have really delivered a high-quality product to the marketplace. The work culture and progressive attitude of the company is also something that I have noticed and highly value. I look forward to becoming a key member of an already strong design team,” he says.

“I have known Dave since he was with Team New Zealand back in 1995, like so many of New Zealand’s great sailmakers he was trained under the legend of Jimmy Lidgard and from those days has very much gone from one Grand Prix program to another. I have been lucky enough to sail with Dave on the beautiful Hoek Ketch “Elfje” over the last few years and have watched his growth as a sail designer. Doyle Sails is all about fast sailors creating fast sails and that’s why we are so excited about having Dave Armitage join our international team.”

Richard Bouzaid, Head of Design, also comments on the news,

“The addition of Dave to our ever-growing design team really helps to increase our capacity and skills to innovate at the Grand Prix level of our sport which feeds into all areas of sailing. The classes and race yachts that Dave has worked on and developed sails for, range from the highly competitive Farr 40’s through to the technically challenging superyacht projects. To have Dave in addition to our other great design personnel will help innovate and evolve the future of Stratis and Doyle for many years to come. Dave fits perfectly to Doyle’s general approach in having the best people possible – he is a winning sailor and a world-class trimmer at the top level, so he understands first-hand what is required to make a boat go faster, which makes a big difference to what he contributes. I’m looking forward to working with him.”

A stellar all-round team that covers every aspect of sailmaking, from R&D and design to sail technology, is a major offering from Doyle Sails over its competitors. David’s appointment builds on Doyle’s continued investment into the performance sailing sector and the company’s commitment to ensuring that their clients continually benefit from the knowledge of the best in the industry.