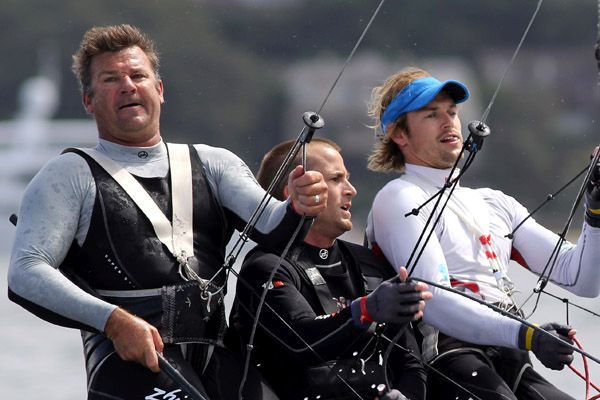 The strain and concentration on the faces of the appliancesonline crew tell a story of the pressure on a SE spinnaker run. Photo 18 Footers League.

Describing David Witt, skipper of appliancesonline.com.au in the 2016 JJ Giltinan 18ft Skiff Championship, being sailed on Sydney Harbour at present, in one sentence or one story is an impossibility.

Those who know Dave will have a wide variety of opinions on this larger than life character, but the one thing they will all agree – he is a great heavy weather sailor, with no fear of the elements and a never-say-die attitude.

Marcus Ashley-Jones, who is the skipper of the highly rated Asko Appliances team in direct competition with Dave Witt at the JJs, sailed with Witty on board Ragamuffin 100 in the recent Sydney-Hobart Race, has a very definite opinion about his heavy weather skills.

“After sailing with Witty for two years, I’ve learnt why he is regarded as one of the world’s best heavy weather downwind sailors,” Marcus said. “He has a push it to the limit and just don’t back off attitude and I’ve found myself wide eyed on many occasions. From laying flat with the mast in the water in the pitch black of night, to doing 40+knots speed, with all the gear up, down the Tassie coast.”

There is a lot more to the story of Dave Witt than many people know, and nobody should be fooled by the humourous, larrikin exterior he portrays. He is always there to win every time he goes racing.

Dave’s association with the 18s goes back to 1988 when he arrived as an unknown 17-year-old at the ‘League’, from the Cherub class, with an old Tia Maria hull which his father, Greg, bought for him. To everyone’s amazement, Dave was one of only a few skippers able to complete the course in a strong southerly wind on Sydney Harbour, and he quickly earned the reputation as one of the best 18 Footer skippers in Australia.  Despite a break in the early 2000s, Dave has never lost his ‘edge’ and today is still one of the best exponents of getting a great start off the line in an 18ft Skiff.

Dave had ten years with the Grand Prix Sailing 18 Footer circuit and is ‘famous’ for a video of his Nokia team’s sensational ride in 30+knots.wind on Auckland Harbour.

For anyone who hasn’t seen this video, it’s really worth a look and the link is:

As an Australian, Dave also has the unusual record of being a part of the UK Rockport team which won the 1999 JJ Giltinan 18ft Skiff Championship.  Rockport’s skipper Tim Robinson, who became the first skipper from the Northern Hemisphere to win the JJs, was recently in Sydney and recalled his association with Dave.

Tim recalls:   “I first met Witty back in 1990 and we got to know each other well during the 18 Footer Grand Prix Sailing days, and in the 49ers leading up to the Sydney Olympics.  I don’t remember the actual moment but I am sure the initial idea to come to the JJs came out of one of those post -race evenings.

“In my earlier attempts to race the JJ Giltinan my team had come down in our Ovy one designs and always felt inferior equipment wise, so when the League decided to sell off a few of their boats, we saw this as a great opportunity to try and compete on level terms.

“I bought the old Tyrells Wines in 1998, which had a reputation for being very fast, and set about planning for the 1999 JJ. I must have asked Witty early in 1998 as he came over to the UK to sail part of the UK 18 Footer Series and then the International Regatta we held in Fowey.”

“Witty was quite influential, or should I say forceful, regarding our sail program and we bought a new set of sails from Ian Short, in Sydney. Of course, being Witty, we ended up with the biggest sails it was possible to build.  They were very big and very flat, which meant we were super fast in the breeze and really quite slow in the lighter winds.  This meant winning the windier races by minutes but struggling in the lighter days.

“At the time I was spending our winters in Australia as part of the British Olympic 49er Team build up to the 2000 games.  After the 1998 49er Worlds in Melbourne I drove up, with bowman Zeb Elliott, a few days before the 1999 JJs.With  all three of us having sailed 49ers virtually every day for the previous six weeks, we were all in good shape, so it really came down to our boat speed.

“Witty obviously brought a lot to the team with his local knowledge and supreme confidence in all situations on the water. He was equally confident off the water and decided to place a bet on us to win the regatta.  Initially, we had odds quoted to us of 14-1, which Witty and I decided was too good to miss out on. We approached the bookies with $1,000 for the win but got knocked back to a couple of hundred dollars when the bookie said he could not afford to lose that much.  It was still a good payout and the evening went on until it was all gone.”

“I recall being some way ahead on points going into the last race and needing to finish no lower than 14th to win.  The wind was light and we were about 18th and the stress levels were mounting, but we got there in the end.”

Dave sailed the 1997-98 Around-the-World-Race and has competed in numerous classes around the world.  His latest achievement was to skipper Ragamuffin 100 into second place, behind Comanche, in the recent Sydney-Hobart Race.

Apart from sailing, Dave’s other sporting passion is Rugby football. He played for both Southern Districts and Parramatta in the Sydney competition and has been a successful coach with Wests Brisbane Bulldogs from 2006-2010. As a resident of the Central Coast, just north of Sydney, Dave still continues his coaching career.  He presently coaches Ourimbah Rugby Club as well as the Central Coast Divisional team.

After the first two races of the 2016 JJ Giltinan 18ft Skiff Championship, Dave, Tom Clout and Tom Anderson are poised to challenge for victory in their appliancesonline.com.au sponsored skiff.

With a win in Race 2, following a good fight back to finish fifth in Race 1 (after being recalled at the start), the team is placed just one point behind the series leader Thurlow Fisher Lawyers (Michael Coxon, Trent Barnabas, Dave O’Connor) and equal with the Smeg team of Lee Knapton, Ricky Bridge and Mike McKensey.

The 2016 JJs are being livestreamed on www.mysailing.com.au.