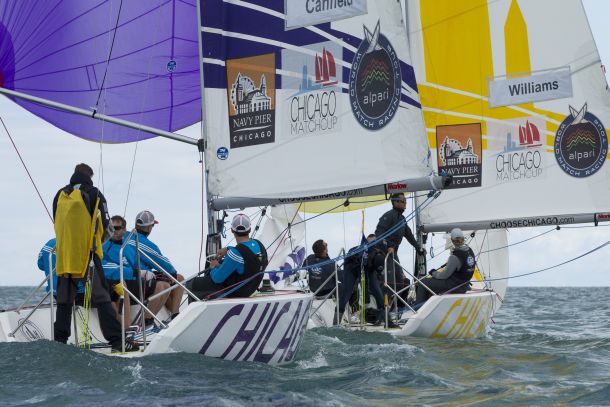 The 2015 US GRAND SLAM Series will take place within the month of August, beginning a couple weeks earlier and in a different order than previous editions. The Manhasset Bay Yacht Club, Bayview Yacht Club, Chicago Match Race Center, and Oakcliff Sailing organisers are pleased to announce that Requests for Invitation are being accepted nowand all venues anticipate high demand.

This premier ISAF Grade 2 series attracts top talent from the US and around the world, and has been an important stepping-stone for amateur skippers to reach the top. Previous winners of the series have subsequently earned World Match Racing Tour Cards and launched highly successful campaigns, such as Taylor Canfield's US One Sailing Team who won the Grand Slam Series in 2012 and then went on to win the World Match Racing Tour (WMRT) in 2013.

As in previous years, this year's winner of the overall series will receive an invitation to the 2016 edition of one of the most prestigious match racing events in the U.S.: Long Beach Yacht Club's WMRT Congressional Cup. Last year's US GRAND SLAM champion, Pierre-Antoine Morvan from France, received an invitation to this year's 51st Congressional Cup in May, which for the first time will be a stop on the WMRT.

The Manhasset Bay Match Race for the Knickerbocker Cup will be the lead event in this year's series held over August 6-9th on the north shore of Long Island, New York. Unlike the previous years, the event will be sailed in equally-matched Sonar class boats with four crew members. Prizes include a total prize money purse of $12,000 and an invitation to the 2015 WMRT Bermuda Gold Cup.

The next stop on the US GRAND SLAM, the Oakcliff International, will also offer prize money with a total purse of $10,000. The event will be sailed in Oakcliff Sailing's fleet of Match 40's, the largest keelboat on the match racing circuit with crews of five or six. Racing here will be held over August 13-16th a few miles east of Manhasset Bay at Oakcliff Sailing's base in Oyster Bay, New York

Then the competition  heads west to Lake Michigan for the Chicago Match Cup Grand Slam. Racing will be held over August 21-23rd in the Chicago Match Race Center's Tom 28's with crews of four or five battling each other on courses set close to the shoreline of Lakeview, Chicago.

For the fourth and final stop on the US GRAND SLAM, the competition will migrate to Detroit, Michigan for Bayview Yacht Club's Detroit Cup held over August 27-30th. The crew size will reduce even further to teams of three or four in Bayview's fleet of Ultimate 20's. Courses will be set on the Detroit River within easy spectator viewing from the Club.

For teams to receive an invitation to the US GRAND SLAM series or to individual events, there are several qualifiers that can be found in the Notice of Series. Organizers of each event will also consider requests for invitation based on a team's ISAF ranking and region of origin. Four successive Grade 2 events in a single month makes travel easy and is a great opportunity for skippers to earn valuable ranking points, which is why this series is a favorite for many top-ranked skippers and their teams from overseas.

“We're extremely pleased with the interest and turnout in the US GRAND SLAM over the past four years,” said Dave Perry, Chairman of the US Sailing Match Racing Committee. “We are fortunate to have been able to move the entire series into a month where there are fewer conflicts and more opportunities for our sailors and teams. I expect this fifth year will be another great one for the US GRAND SLAM, with the best in the U.S. meeting some of the best in the world in one great series.”

For results and more information on the US GRAND SLAM, download the Notice of Series below or visit the series website at www.usamatchracing.com/2015