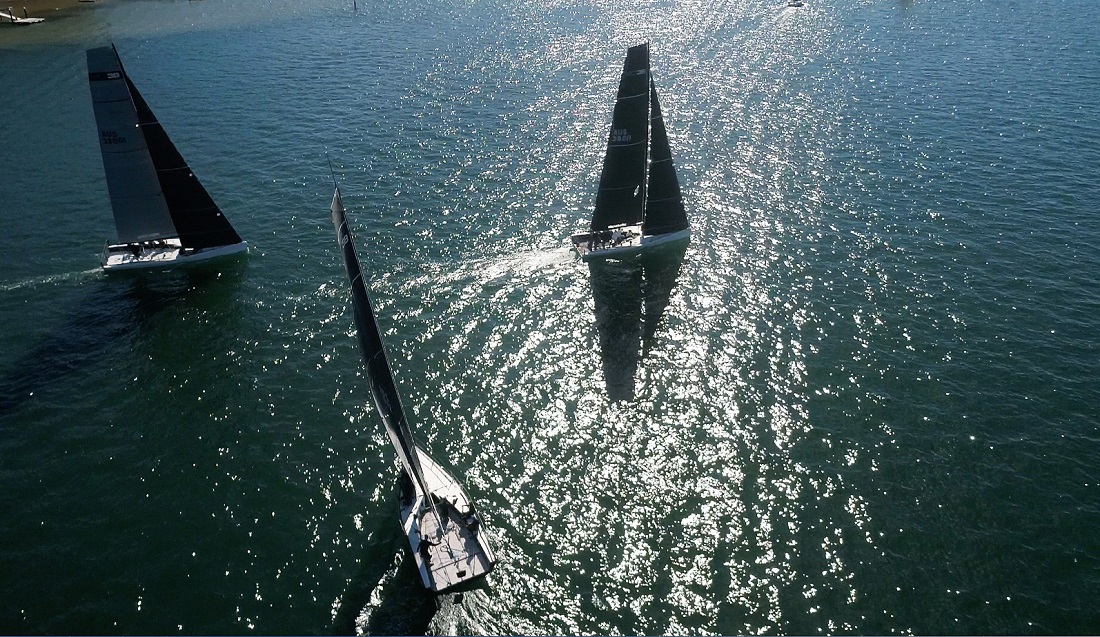 Two wins apiece in light and fluky winds on Pittwater has the host club’s Dark Star leading Neville Crichton’s Maserati by a point on overall scores after day one of the MC38 Winter Series.

A harsh autumn sun and 24 degree day juxtaposed the series’ name for the opening event of a four-part winter pointscore running from May to September between yacht clubs on Sydney Harbour and Pittwater.

Dark Star’s owner John Bacon and his long-time tactician Cameron Miles know Pittwater as well as is possible, given the topography of the narrow waterway with hills both sides and Scotland Island acting as a sizable wind barrier. This knowledge plus finding high gear meant Pittwater treated them well.

“It was nice to be back on our home waters though it was fully tricky and you had to be really patient,” Bacon said.

“We got really aggressive with changing gears and upped the work rate, and it really paid off. I thought we’d be rusty after missing last regatta but the teamwork came together, we picked the right sails and the boat was going fast. It was one of those days everything lined up.”

Sydney Harbour blow-ins Maserati (Cruising Yacht Club of Australia/Royal New Zealand Yacht Squadron) and Ginger (CYCA) have had their successes on Pittwater and Maserati came to this regatta as the most recent class victor, at the MHYC Autumn Regatta three weekends ago when Chris Way drove.

This time Crichton, who had another engagement, handed the helm to Farr 40 owner/skipper Martin Hill.

Maserati’s tactician Joe Turner said with some sarcasm, “Lovely Pittwater in winter… actually it wasn’t too bad and a couple of things went our way. Changing helms is ok; us six guys have been together for a year and we are starting to gel. Martin is an excellent helm and slots in perfectly with the team.

“Neville has a lot going on outside sailing but he’s planning a full tilt starting with the August series; he’s excited to come racing again,” Turner assured.

Debriefing on today’s efforts Turner said his crewmates gave him plenty of stick for a couple of their starts. “I have a suntan inside and out after being burnt by the crew for some bad tactical decisions. I’m all emotional,” he joked.

Set up between the eastern side of the island and Newport, the Royal Prince Alfred Yacht Club’s team of race officials managed four races on a “tough old day,” said race officer Steve Merrington. The breeze started out in the NW then went to due north and back to NW, 5-10kts with the odd 12 knot puff.

Racing recommences for the one design fleet at 1000hrs on Sunday May 7.