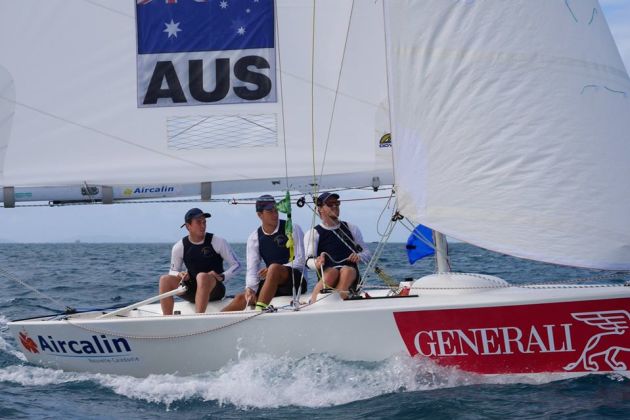 Thirty-three matches were sailed today in the lee of Ilôt Maître. On this third day of racing, all ten crews have completed the second Round Robin in a steady 20 to 25 knot wind.

The qualification phase is finished. We now know the names of those who are qualified for the quarter finals.  The Australians hold the first two places.  The New Caledonians are third… and the Japanese and the other French crew have made a good comeback!!!

Robin Follin and Ryo Takahashi’s crews might well meet again tomorrow in a match that could have been the final.

Only the first three can choose their opponents.

The eight quarter finalists are:

The crews knocked out of the qualifiers are the Danes (Lars- Peter Rosendalh’s crew – he was a World Champion crew member in 2014), and the Americans, helmed by Charlie Lalumiere, ranked 44th in the World.

This is how the second Round Robin affected the results of the first:

The Australians from RPAYC won eight matches out of nine and so beat their fellow countrymen from CYCA into second place.

The Japanese crew of Ryo Takahashi were much improved. In the first round, they had five victories out of nine matches, whereas they are first in the second round. The boys from the Land of the Rising Sun won eight matches out of nine. At the end of the qualifiers, they are in fourth place.

The New Caledonians, having won all their matches in the first round, lost four times in the second. They are third overall. No-one would have guessed at such a good result even a week ago…