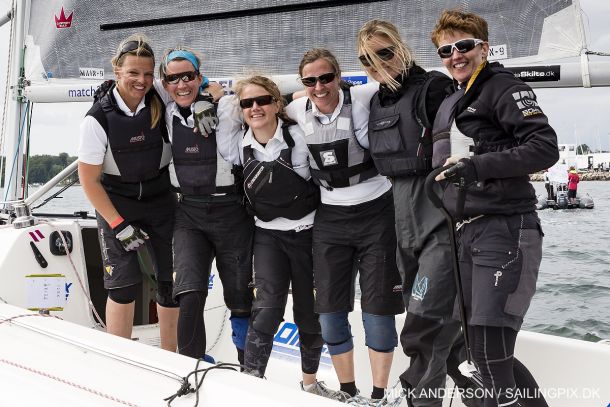 The Danish dynamite exploded completely when the 2015 ISAF Women’s Match Racing World Championship, the first event on the 2015 WIM Series, concluded Sunday in Middelfart. The all-Danish final, comprising Lotte Meldgaard and Camilla Ulrikkeholm, went to five stunning matches, with absolutely amazing action all the way to the last and very close finish fight. Now Lotte Meldgaard is the new World Champion: “I’m so happy, this was about time” she shines, explaining that she’s raced in almost all the championships since 2000, until today having achieved all medals but the golden one around her neck.

The cheering crowds on the harbour pier of Middelfart got a show they’ll never forget, when the two Danish crews in the final clashed almost within the reach of the many spectators. In the first match Ulrikkeholm led the whole race, but at the end forgot to properly cover Meldgaard, who immediately took the opportunity and won by just a few metres. In the next race Meldgaard led all the way and finished first again, gaining three “match points”. Ulrikkeholm saved the first one by passing Meldgaard just before the finish of match 3.

In the 4th match Meldgaard was given a penalty after a windward – leeward situation in the pre-start, went out on the course leading and was able to offset the penalty on the last downwind leg, but lost the lead in the process. Ulrikkeholm won, resulting in a 5th and finally deciding match. In the last match Ulrikkeholm got a red flag penalty for tacking too close to Meldgaard at the pin end of the starting line, just before the starting signal. As she had to do her penalty turn immediately, Meldgaard grasped the opportunity to gain a substantial lead.

Still Ulrikkeholm managed to close the gap at the finish, where Meldgaard fought hard to keep her narrow lead. With less than a boat length the latter sailed in as the winner of the 2015 ISAF Women’s Match Racing World Championship: “The whole day was very challenging, but we had good speed and read the course quite well. Of course it became intense, and we got a bit stressed, but all in all I think we kept our heads clear” Meldgaard comments. “Of course we’re really sad and disappointed now. It was tough being down 0 – 2, but we managed to recover from that, and we think we sailed very well. Except when giving the first match away by not covering her properly,” Ulrikkeholm says, not very happy for her third consecutive silver medal.

Looking back a the day it all started with the morning briefing, when Anne-Claire Le Berre picked Lotte Meldgaard as her semi final opponent, leaving Camilla Ulrikkeholm and Stephanie Roble to race each other. Le Berre may have regret that choice when she was beat by Meldgaard in three straight semi final matches, while the other semi final ended 3 – 1 in favour of Ulrikkeholm.

Sailing for bronze place in the petit final, Stephanie Roble took the start in the first match and then stretched her lead over Le Berre all the way around the course, to finish with a quite comfortable victory. In the second prestart Le Berre was penalized for not keeping clear in a port – starboard situation, yet managed to get away well ahead of the American. Le Berre kept her lead until the last downwind, when she decided the lead wasn’t big enough to do her penalty turn. The French skipper waited for Roble, forced her past the finish line, and was very close to being able to take her penalty and finish first, but Roble sneaked in between to secure the bronze medal:
“We were very disappointed not to make the final, but then recharged to get on the podium. We had great pre-starts and carried the momentum throughout our races, thanks to my awesome crew” Roble comments. “Today we didn’t perform well at all. Our opponents simply sailed a lot better than we did. But we’ll bring with us the feeling to the next WIM Series event in Lysekil, that we can for sure challenge the Scandinavians in bigger boats like these,” Le Berre concludes.