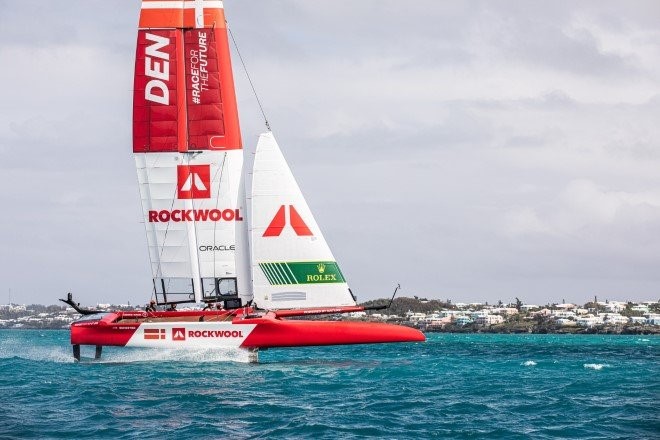 Denmark SailGP Team was first to hit the water in Bermuda

SailGP is officially back on the water with the first of its supercharged foiling catamarans, Denmark SailGP Team, launched ahead of the Season 2 opener – the Bermuda Sail Grand Prix to be held later this month.

Over one year since the high-speed F50 catamarans – some of the world’s most high-tech race boats – were last seen in action, SailGP returns for Season 2 with additional teams, an expanded season and a purpose-led agenda at its heart – racing for a better future, championing a world powered by nature.

The Denmark SailGP Team became the first of the eight nation fleet to hit the water on Friday. And, as the eye-catching boat took to Bermuda’s Great Sound, it signalled a long-awaited return to action for the global racing league.

Denmark SailGP Team helm Nicolai Sehested said: “It’s a huge day for our team, and for the whole of SailGP. We’ve been dreaming of stepping back onboard the F50 for more than 12 months, and it feels kind of surreal that the day is finally here.

“These boats are absolute beasts – and they haven’t lost any bite, that’s for sure. I think we are going to see performance and speed limits pushed further than ever before this season.”

For its first sail on Bermuda waters, the Danish boat featured a smaller 18-meter wingsail. The modular system is a new innovation for SailGP Season 2 that allows the wing to increase or reduce in size to enable racing to take place in a broader range of conditions.

With the anticipation of the first event of the season mounting, the adrenaline is pumping through the Danish team as it takes in its surroundings at Cross Island, located along Bermuda’s Great Sound.

Sehested said: “It’s great to be in Bermuda and to be able to get back to racing in a safe and healthy way, more than one year after the last event. Of course, we’d love to see more of this beautiful island and meet some of the SailGP fans, but delivering a fantastic event in a safe way is the priority. I’m confident that we’ll see some epic racing in the Great Sound.

“Each team operates in a closed bubble, with all athletes and staff wearing Personal Protective Equipment at all times, social distancing, and being tested regularly.

“Movement is tightly restricted to the event venue and the hotel. SailGP and the local authorities have put in place extremely stringent COVID-19 procedures to allow this event to take place. As one of the first teams on the ground, it’s impressive to see the scale of the operation in action.”

Sehested said: “SailGP has always been about the best sailors on the planet, racing in identical, supercharged boats, and the new talent and experience coming into the league raises that level even further. We respect everyone but we certainly don’t fear any of our rivals – and we think we can surprise a few people this season. We’re looking forward to getting some good time training on the F50 ahead of the season opener.”

Former World Sailor of the Year Anne-Marie Rindom and Katja Salskov-Iversen – both Olympic bronze medallists at Rio 2016 – will join the Danish campaign under a new initiative launched by SailGP to accelerate female participation and create clearer pathways to the top of the sport.

The pair will join Sehested and returning team members Tom Johnson (AUS), Martin Kirketerp (DEN), Rasmus Køstner (DEN), Hans-Christian Rosendahl (DEN) and Lars-Peter Rosendahl (DEN) as part of the next stage of the trial, where they will be immersed with the team to develop and hone their skills.