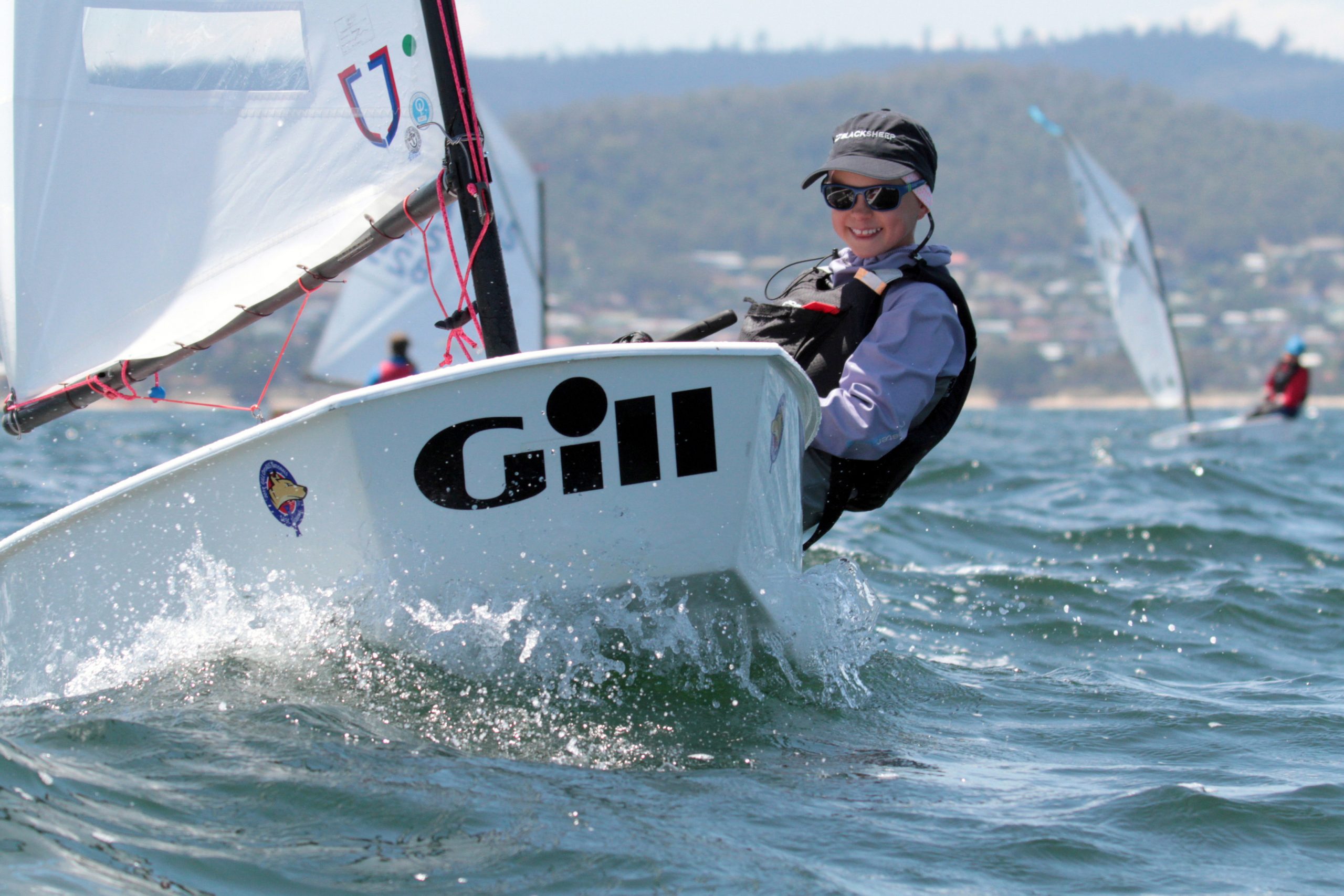 Coaching programs to develop the racing skills of each club’s up-and-coming young sailors have played a key in the final results of the 2019 International Optimist Australian Championships.

Daniel Links from the Royal Prince Alfred Yacht Club on Pittwater, NSW, won the title this week after a regatta long duel with Eddie Reid from the host club in Hobart, Sandy Bay Sailing Club.

The two 13-year-olds out sailed the 140 boat open qualifying fleet and progressed to the gold fleet with Links just ahead of Reid after seven races.

Discarding one Gold fleet race and adding the net qualifying score, this gave Links victory with a net 20 points, Reid 36 and in third place Ethan Lozovski from Woollahra Sailing Club on Sydney Harbour with a net 50 points.

Fourth overall, on 55 points, was Jonathan Tuite (NSW) while in fifth place was Keizo Tomishima (NSW on 59 points.

Final results and the presentation of trophies at Hobart’s Wrest Point were delayed several hours because of protracted protests and redress hearings. The total overall standings were not published on the event website until yesterday.

By comparison, Sandy Bay Sailing Club is a small off-the-beach club with is clubhouse nestled in the sand dunes behind Nutgrove Beach on the River Derwent.

Hugo Alison and James Gough won the International Cadet nationals in early January, with Archie Ibbott and Sam Hooper runners-up, then Alice Buchanan and Dervla Duggon finished top women’s crew in the 29er nationals, as did Jasmin Galbraith and Chloe Fisher in the 49erFX skiffs.

Also in the 29ers, William Wallis and Fynn Sprott, finished a close second with four crews from SBSC in the top ten.

The coaching program at this small club has again paid dividends, with 13-year-old Eddie Reid today confirmed as runner-up in the International Optimist Australian championships.

Overall winner was another young teenager, Daniel Links from the Royal Prince Alfred Yacht Club on Pittwater, NSW, in a 140-boat fleet dominated by mainland sailors.

Links and Reid fought out the qualifying races, but Links proved just that better in the gold fleet racing to decide the championship.

Eddie’s father, Phil Reid, today paid tribute to the Sandy Bay Sailing Club’s coaching program, and the mentoring his son and others had received.

“The Tasmanian International Optimist Racing Association and Lizzie (Rowntree) organised prominent coach Alec Broadby to come to Hobart for an intensive training camp and other coaching sessions have been regularly held,” Reid said.

“The coaching through the Club has been a key factor in Eddie’s success in reaching the top of a most competitive national and international fleet,” he added.

Eddie has also qualified to represent Australia at the Optimist Worlds at Antigua in July. One would expect he is having a well-earned rest from sailing after a dozen intensive races in the single-handed Optimist in often challenging sailing conditions, but far from it.

Two days after the Optimist nationals, he teamed up with another SBSC member, Archie Ibbott (runner-up skipper in the Cadet nationals) in sailing a high-performance 29er skiff in the Australian Sailing Youth Championships. They were 24th overall in the fleet of 32 29ers after the first day.

Back to the Optimist results, first place in the Silver fleet went to Daniel Laverty (Vic) from Jack Saul (Qld) and Pol Rafart (WA) whose twin sister, Ona, qualified for the Gold Fleet, finishing 66th.

Winner of the Optimist Intermediate Championship was Jack Scharf (Qld).