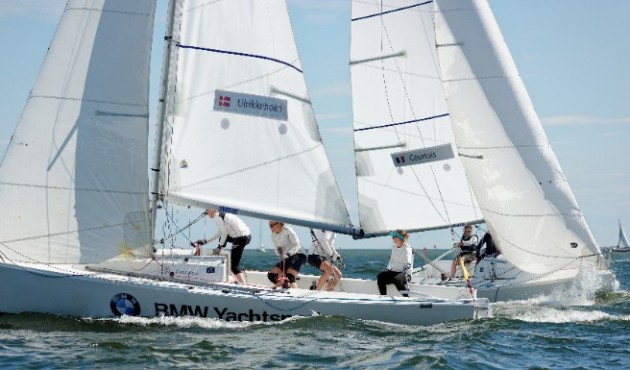 The Danish long-time World #1 Camilla Ulrikkeholm Klinkby showed today in Finland that routine and experience are key factors in match racing. With five wins she’s the only undefeated skipper, already sitting alone at the top of the leader board of the Helsinki Women’s Match.

“We had some trouble with the timing today, but we’re really happy to be match racing again after the long break since the 2015 WIM Series final in Korea last October,” says Ulrikkeholm Klinkby.

The grey skies, the cold winds and the heavy rain during Monday’s practise session, were all forgiven and forgotten as the round-robin of the Helsinki Women’s Match got underway with the first matches today. In bright sunshine and a warm and somewhat shifty south-westerly breeze around 10 – 12 knots, the crews manoeuvred their boats in thrilling fights, just metres from the cheering crowds at the beach-walk bars and restaurants. Hernesaari (Ärtholmen), situated in the southern part of the Finnish capital Helsinki, is nothing but a perfect arena for match racing, marking an exciting premiere for the 2016 Women’s International Match Racing Series.

Among a dozen participating teams from half as many countries, Camilla Ulrikkeholm Klinkby and her team immediately took command. But the Danish winning streak almost came to an end when they met the French skipper Pauline Courtois, in the last match of the day.

“We timed the start badly and let Pauline take the lead. She kept it through the first upwind and down to the bottom mark approach, before we could roll her and drive her far away from the mark. Then we kept her behind us all the way to the finish line,” Ulrikkeholm Klinkby described. “It was our mistake. We had some problems with our spinnaker, and that cost us first the lead and finally also the match.”

Apart from that defeat, the French World # 6 skipper was quite happy with her Tuesday, now sharing the runner-up position with no less than three other crews: “We really enjoyed the great match racing conditions, with winds that shifted a little in strength and direction, just to make the racing challenging and interesting.”

The highest ranked Finnish skipper is also the highest placed so far in the Helsinki Women’s Match. With three wins against two losses, local hope Marinella Laaksonen stays on sixth place: “This is our first WIM Series event, and we didn’t really know what to expect. Some of the other teams we’ve never raced before, and that’s always challenging,” she explains.
“We had some tight matches and learned a lot, so we’re of course looking forward to the rest of the week.”

Results in the Helsinki Women’s Match, the first event of the 2016 WIM Series, after day 1 of the round-robin (skipper, nationality, wins – losses):

The racing continues Wednesday with the round-robin on the waters at Hernesaari (Ärtholmen), to be followed by quarterfinals, semi finals and then the conclusion with the final on Friday, July 1.