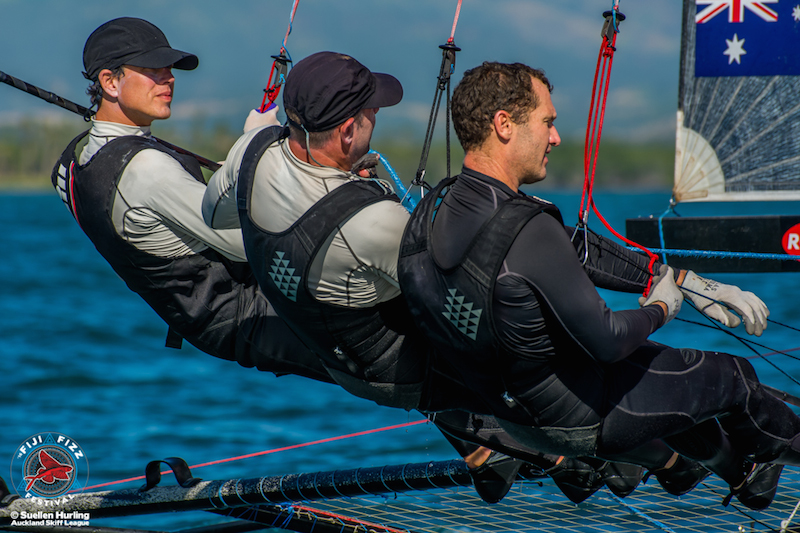 Day two of racing started in similar conditions to yesterday. But as the racing was underway the breeze built to a steady 12 knots and swung to the right. It appeared to be the perfect conditions for the New Zealanders with Yamaha ending the day with two bullets and C-Tech claiming the third race.

In race four the Yamaha team took the lead from the start and sailed away from the fleet. Smeg and C-Tech rounded out the podium.

There was more action in race five. Thurlow Fisher Lawyers lead at the top mark but were soon overtaken by Yamaha on the run.

At the bottom mark, half the fleet went left and half went right. It paid for the boats on the right as the wind shifted and as the leaders were rounding the top mark it became a soldiers course.

Smeg had trouble at the bottom mark with Maersk Line and had to bail out. After getting the boat under control they rounded the mark in 14th.

Yamaha went on to win their second race of the day with Thurlow Fisher Lawyers in second and Harken third.

“I love the race committee,” he said. “Easily one of the best regattas we have done.”

When the postponement flag went down it was all action. Triple M was lining up for a port hander start on the pin but ended up adding a second OCS to their scorecard after getting the timing a bit out.

Skipper Brett Van Munster explained, “We went for the port hander and got completely chicken winged up. But you gotta give it a go.

Yamaha was first to the top mark but got stuck letting C-Tech slip through. It was then a battle of the Kiwis. At the top mark for the final time C-Tech had held on to the lead and Thurlow Fisher Lawyers followed them around with Peroni then Yamaha.

At the finish line it was C-Tech then Thurlow Fisher Lawyers and Yamaha.

At the end of the day, Yamaha has the lead with eight points. Thurlow Fisher Lawyers is in second with 10 points and Smeg third with 21. Results are provisional as a protest is to be held.

There will be no racing tomorrow as the fleet enjoys the day off ahead of the long race on Thursday. To keep up with all the action head to the Fiji Fizz Festival Facebook Page. For results and daily videos head to Auckland Skiff League.