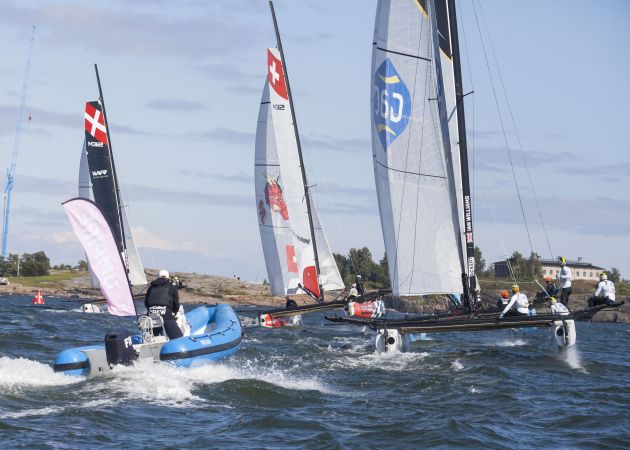 Helsinki, Finland (August 15, 2017) – The tropical paradise of Hernesaaren Ranta delivered three days of tight racing action, just metres from the shoreline of the race village in Helsinki city centre. Danish team Wallén Racing were the stand out performance of the weekend, leading from race one and never leaving the top spot.

“We are so happy with the result here after what happened in Norway”, reflected a very excited Jonas Warrer, the winning champagne bottle still firmly in hand. “We lost our way a little at the last event but this time we worked on our starts and were able to hold on to the lead.”

Winning race one of the regatta and then continuing to take four bullets on the opening day of M32 Series Scandinavia in Helsinki, Jonas Warrer and his all Danish crew stamped their mark on the event from the outset. Swedish Flux Team with skipper Johnie Berntsson were yet again the comeback crew of this event, repeating their progression as in Risør. They ended day one in bottom spot on the leaderboard, however as in the previous event in this series the team ended the day strong with a race win to close out the afternoon and carried that momentum forwards into the second racing day. The crew on board joked of Johnie celebrating his birthday the previous day being an excuse for their performance and came out of the blocks strong with back-to-back wins in the early races on day two. As racing ended for the day, the Swedes had closed up the gap to Warrer within just a few points.

Swiss team Section 16, champions of the 2016 M32 Series Mediterranean, made their debut performance on the Scandinavian series this weekend and showed why they were at the top in the Med by planting themselves firmly on the podium after the first day of racing. Skipper Richard Davies, also the M32 Class Association President, said before racing that he was “really looking forward to the challenges of the tighter race courses that we have out on the water. It’s a little different here from the Med sailing but really looking forward to competing against these teams.”

As teams arrived at the event village for day three, they were greeted by clear blue skies, 18 knots of wind and a race course just waiting to be played on. As the wind was forecast to build, the race committee called all boats to put in one reef to the mainsail. Out on the course, Jonas Warrer and team continued their dominance of the event by taking the opening two races, extending their lead at the top the table. With building winds and a gusty race course, the opportunity to steal the lead was presented to all teams and all getting a piece of the action at the front throughout the races, some doing a better job of holding the top spot than others. Section 16 took another bullet as the breeze built before handing the baton to Johnie Berntsson’s Flux Team. Between them, Flux Team and Wallén Racing were providing demonstrations of boat handling excellence as they completed manoeuvres in the testing conditions effortlessly – sometimes not the neatest, but always the quickest.

As racing progressed to the finals, double point scoring races, the M32 World race committee celebrated their 1000th race start of 2017. This mind blowing figure beats the 2016 date of mid-September to reach this figure and is testament to the M32 catamaran being a boat for such a diverse wind condition and race course state.

With the drama of double points, and the chance to win race 1000 on the cards, it was the 2016 defending champion of M32 Series Scandinavia who stepped up to the plate. The British team always manage to turn their fortune around when it counts, and the chance of double points was their moment to climb up the leaderboard.
With the third podium spot still within grasp of three teams going into the final race, GAC Pindar just had to finish ahead of Essiq Racing Team and not fall three positions behind Section 16.

Skipper Ian WIlliams is a man who always knows the numbers and so would have had this on his mind coming in to the final double scoring race.

In the end the British team made it and sneaked into third place to close out the overall event podium. Flux Team managed another three bullets on the final day, but still couldn’t get close enough to the Danes to challenge their grasp on this event, as Wallén Racing pulled a bows up “wheelie” to cross the line in style and take the final race and close out a hugely impressive regatta.

With an event win in Helsinki, Jonas Warrer and Wallén Racing now take the lead on the overall M32 Series Scandinavia as the season heads south to Aarhus where Warrer will look to hold on to his top spot on home town waters. The Danish stopover will run August 31st-September 2nd and is part of the 2017 culture festival taking place in the city.