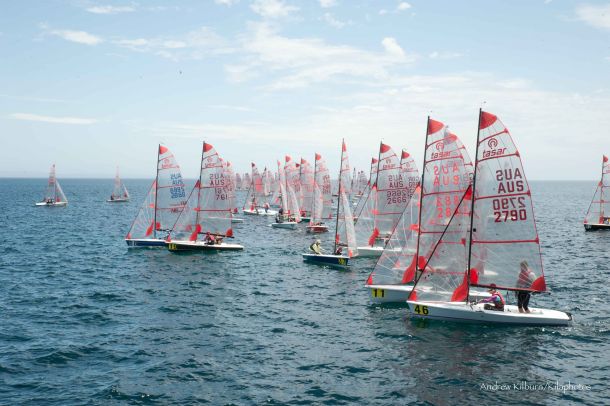 Tasars at the Worlds in Busselton. Photo Andrew Kilburn.

Friday 9 January of the Tasar 2015 World Championships had two races of a possible three to complete the ten race series.  The weather on the course area was similar strong and gusty winds as for yesterday’s races, but from a south easterly aspect.

The first race of the day had a re-start which has been the normal for each race day. Those able to get a good start with clear air made the best of their opportunities in the many gusts and shifts, with a lot of the fleet looked for opportunities to the right of the course which was close to the shore of the Bay but gustier due to the offshore winds.

The first mark (windward) had the leaders in a tight group of about six boats who then battled for positions on the two reaching legs to the leeward mark with the two front boats changing position to give the lead to Rob and Nicole Douglass of Australia.  The Douglass’s maintained their position on the next two legs of the course to win the race. Second place went to Anthony Boscollo and Haley Lane of the USA.  Third place went to Shane Guanaria and Tara Wilson of Australia.

The second race of the day had similar conditions, but the wind had shifted slightly to the south. The weather conditions and the crowded start line due to the large fleet of over 100 boats, saw some different leaders by the time first boats arrived at the first mark (windward).

Once again the reaching legs provided great rides in the strong winds, but probably were not so enjoyable while they were working hard to maintain their position. The top mark and then the finish line were situated close to shore to provide great viewing for those on shore. First place went to Aaron Linton and Jamie Jochheim from Australia. Second place was taken by Craig McPhee and Gillian Berry of Australia.  In third place was Jay and Lisa Renehan from the USA.

The World and Australian Super Grand Masters Champions are Constantine Udo and Jan Kellermann-Slotemaker from the Netherlands.

The World and Australian Junior Helm (under 19 years) is Nick Willis from Australia.

The Australian Youth Crew (both crew below age 30 years) is James Sly and Chelsea Haynes from Australia.

The Tasar Class flag was passed on to the Japan Tasar Association who will be hosts of the next Tasar World Championships in 2017.

Complete results are available of the regatta web site www.tasar2015.com. It has been very well run regatta, so congratulations to all the organising people and the volunteers who helped on and off the water. The event was being hosted by Geographe Bay Yacht Club, Busselton, Western Australia.