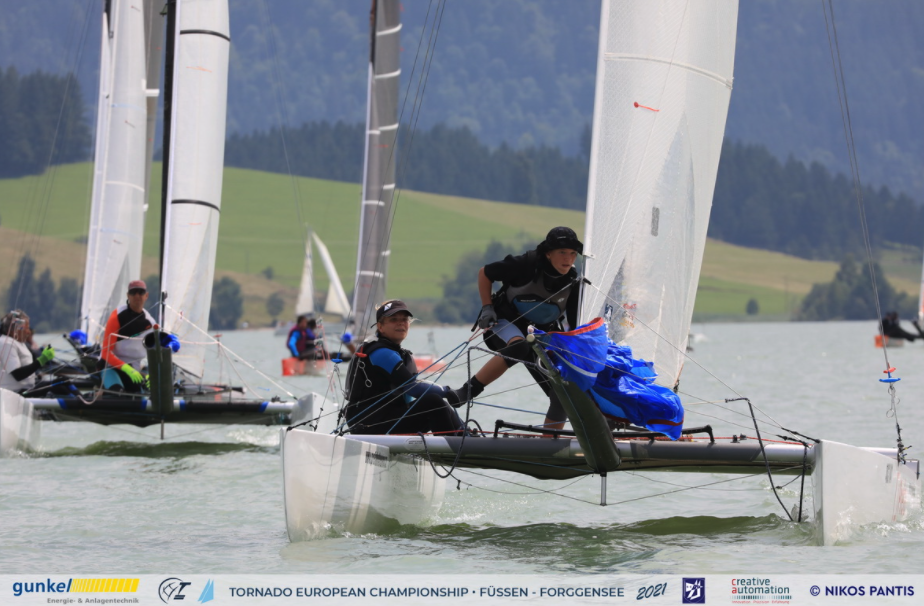 The event was ran by the Füssen Forggensee Sailing Club for the first time in the club’s 65-year history. 17 teams from 6 nations competed at this first major since the start of the COVID-19 pandemic.

The championship began with very weak wind conditions, around 6 knots. Only on the last day did a constant north wind with 9 knots finally appear, so that two races could be sailed again. After a total of 5 races out of the 8 planned, the Tornado European Champions 2021 were decided.

The lightest team by far, 21-year-old Michaela Pavlisova together with her 14-year-old brother Marek, both from the yacht club Kovarov, mastered the difficult light wind conditions on Lake Forggensee. With three first places and a third place in the fifth race, they won the event with an impressive six points over second place. The Greek ex-European champions from the Nautical Club of Thessaloniki, Nikolaos Mavrosand Periklis Aidinidis came second overall, after winning a redress request.

After her win, Pavlisova said, “I didn’t expect such wonderful results, especially when we competed against such experienced sailors, but it makes me incredibly happy.”

The international jury, led by Carlos Gracia Motta, Barcelona, had only one protest on Saturday after the last two races.

The next big international regatta of the Tornado class is the World Championship hosted by the Nautical Club Thessaloniki, Greece, from 26 September to 3rd October.