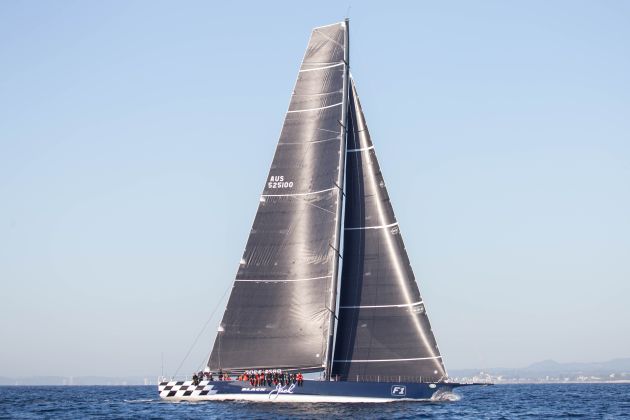 A substantial fleet of 36 will battle it out in Race 4 of the Cruising Yacht Club of Australia’s Blue Water Pointscore – the Cabbage Tree Island Race – on Friday night, with a mouth-watering clash between Wild Oats XI and Black Jack set to be the main event.

As the last big challenge before the Boxing Day classic, many competitors use this race to qualify for entry to the RSHYR and to give their crew a strong training run.

Friday’s race starts at 1900 off Point Piper from where the fleet will head north to Cabbage Tree Island (just north of Port Stephens) and return to finish in Rushcutters Bay, Sydney Harbour.

A light southeasterly of around 10-15 knots will start the fleet with variable forecasts suggesting similar conditions across the duration of the race.

The Oatley family’s supermaxi, Wild Oats XI, returns to action in Sydney Harbour for the first time since her line honours-winning sprint to Southport in the LRSGCYR back in July. The Mark Richards-skippered boat will be the one to watch as the holder of the Open race record which it set back in 2012 – a time of 12 hours, 15 minutes and 55 seconds.

Sure to pique the interest of sailing fans locally and across the world will be the faceoff between Oats’ and her sister ship, the other Reichel-Pugh 100, Peter Harburg’s Black Jack.

The former Alfa Romeo first raced as Black Jack in the LRSGCYR where she was pipped by Wild Oats XI, just minutes separating the two. The pair clashed again at Hamilton Island Race Week and the duels are set to continue as both crews countdown to the RSHYR.

For Black Jack skipper Mark Bradford the Cabbage Tree Island Race is another chance for his group to get time on the water and thinks that upcoming conditions could play into their hands.

“It’s really about getting the show back on the road for us. After Hammo we’ve changed a couple of little things and we’re almost in our final configuration so it’s about getting back out on the water again.”

“We’re just working it up towards Hobart and I feel like every time we sail we are going to get closer to Oats. Ultimately the boats should end up pretty similar, we just need time on the water to close the gap on those guys. Cabbage Tree is the start of that and the Hobart build up.

The forecast is kind of in our favour – a bit lighter. That should really suit our boat but it’s that wind strength where both boats shouldn’t be too bad. I’m expecting a pretty close race and on paper I think it’s leaning towards us as we’re set up for light race.”

Throughout the rest of the fleet the TP52s will battle it out behind the hundred footers with Matt Allen’s new Ichi Ban sure to attract more attention following his strong debut in the Newcastle Bass Island Race. Allen previous Ichi Ban still holds the Conventionally Ballasted race record achieved in the Carkeek 60 in 2015, a time of 13 hours, 23 minutes and 10 seconds.

Also looking for a strong performance will be the overall leaders of the Blue Water Pointscore, Sam Haynes Celestial which will again be skippered by Sean Kirkjian as Haynes continues to recover from a serious cycling accident. Meanwhile the Chinese boat Derucci will make their 2017 debut in CYCA competition as they prepare for the RSHYR.

Skipper Dong Qing says it’s time for his crew to focus, “As the Rolex Sydney Hobart Yacht Race approaches, we are more excited but are feeling the pressure as well. This will be our third year in the race and we hope to make progress on our past results.”

“Cabbage Tree is the test of our first stage training. Our objectives are to secure qualification for the Rolex Sydney Hobart qualification and to test our systems and unearth any issues while we still have time to solve them ahead of the big race on 26 December.”